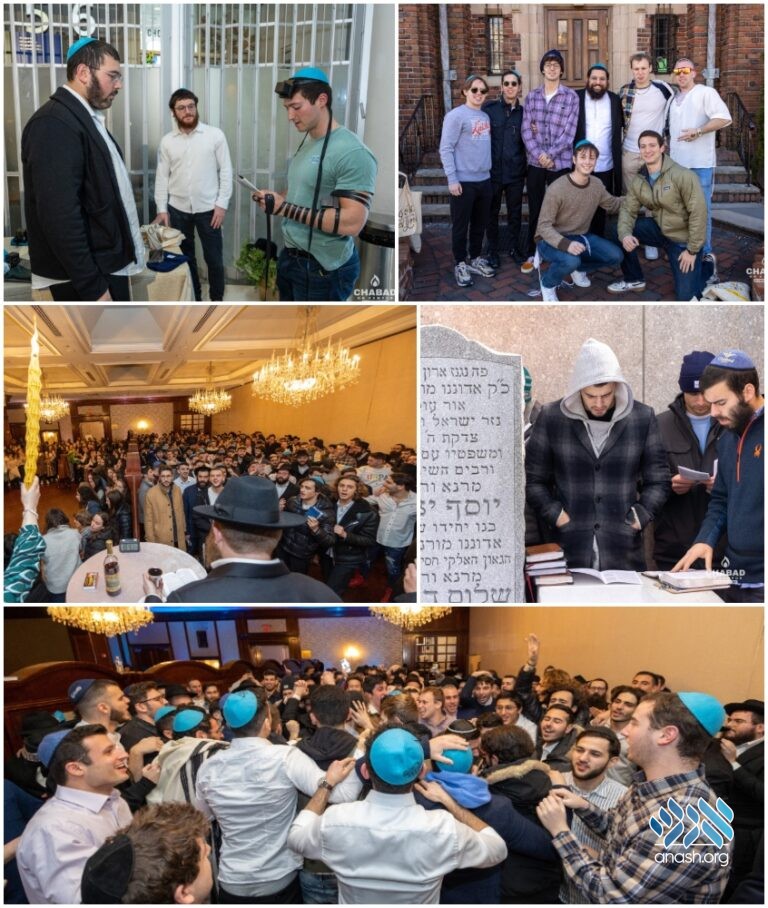 For the second time in recent months, the streets of Crown Heights, Brooklyn, swarmed with college students from all over the globe for another “mini Pegisha”.

The group of a few hundred who attended earlier in the winter came home with rave reviews, and almost immediately, talks of a second one were underway—coming into fruition this past weekend with a few hundred more participants.

For the second time in recent months, the streets of Crown Heights, Brooklyn, swarmed with college students from all over the globe for another “mini Pegisha,”. The group of a few hundred who attended earlier in the winter came home with rave reviews, and almost immediately, talks of a second one were underway—coming into fruition this past weekend with a few hundred more participants.

While in previous years, there was only one international Pegishah for thousands, due to pandemic-related technicalities, this new format was born. For many, it’s a real blessing. “We’ve never been able to bring students to the Pegishah, as the semester schedule here in the UK is different than in the States,” said Rabbi Eli Simon, who together with his wife Mushka, co-directs Chabad at the University of Manchester, England.

“The annual Pegisha always falls at the very beginning of the academic year here, so it’s simply impractical to promote it to a fresh crop of students when there’s so much else going on. When we heard about the mini Pegisha idea and that there would be a group in February, we jumped on the opportunity to finally join, and baruch Hashem, a group of eleven students crossed the pond to join.”

Simon and his group were one of a number of international participants, as three other groups from England came along too, as well as a large representation from France.

It was a powerful experience for young participants. “Many of the students here have very limited exposure to Chabad or really anything so Jewish,” Simon continued. “It was really eye-opening for them to see just how big it is, and how many other Jewish students there are from all over the world. It was a tremendous boost to their sense of Jewish pride.

“It’s really the small things that actually pack the most powerful punch. Some of the students were out late Thursday night, and returned to their hosts’ home in Crown Heights close to one in the morning. The sight that met them when they entered was the host snoozing on the couch with a sefer. He wasn’t waiting up for them, rather he was simply learning his regular shiurim. To see that commonplace type of Jewish living was really very powerful.”

Shluchim and students alike were enthusiastic about the new format. “We come with a relatively large group every year,” said Rabbi Mendel Matusof, who together with his wife Henya co-directs Chabad at the University of Wisconsin in Madison, WI. “There are always logistical challenges with an overall group numbering in the thousands. For example, we usually gather together in Crown Heights to prepare for the trip to the Ohel, as there simply isn’t enough room there to bring so many people together. But this time, we were all able to congregate in the tent and prepare for the Ohel, and that certainly maximized the experience for everyone.”

Matusof describes the opportunity the weekend provided to properly introduce people to the beauty and impact of the Rebbe. “One student who has been involved for almost three years and is soon to graduate got up at the meal on Shabbos afternoon and shared something very powerful. ‘I’m from a reform home,’ she said, ‘and I never really understood what lies at the core of what Chabad is all about. Now I get it. It’s the Rebbe that is the essence of the difference between Chabad and everything else.’ This is just one of many such moments when the students were able to capture the true farbrengen spirit that rolls through the streets of Crown Heights.

As one student said, “I came this weekend to take my Judaism up a notch, and at the Ohel, I feel like a fire was lit. I am excited to go back and bring everything with me back to campus.”