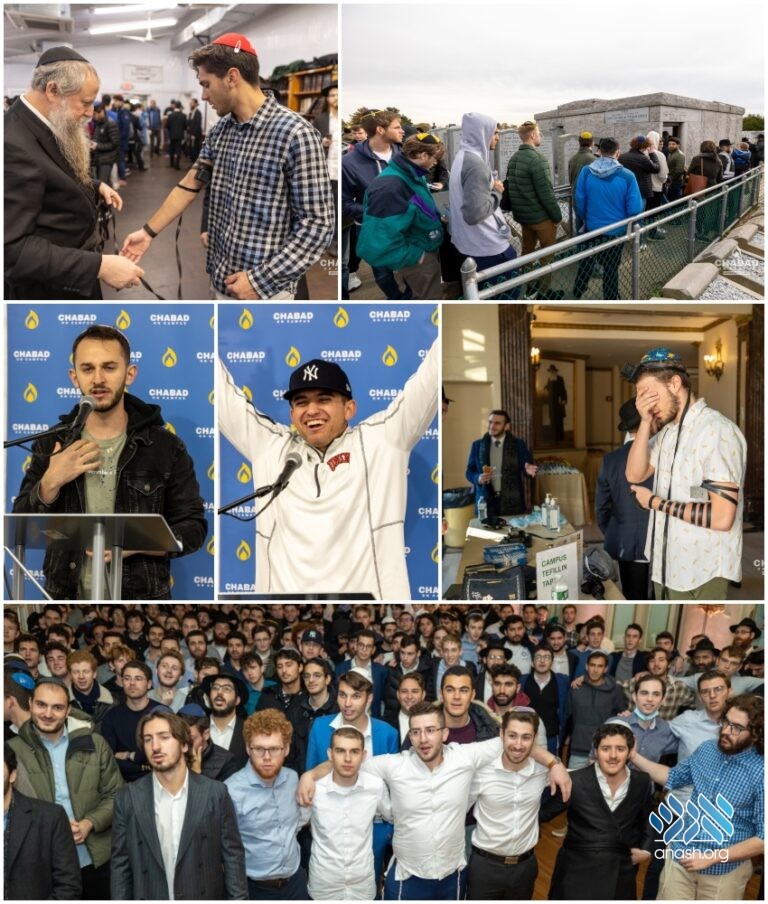 Hundreds of Jewish students from around the world joined the Chabad on Campus Mini Pegisha in Crown Heights. The new format allowed for a more immersive Yiddishe experiences such as being in 770 and spending more time farbrenging.

“I truly am so blessed that I received this opportunity.”

“I am super grateful I had the opportunity to be a part of this trip and I am looking forward to hopefully doing it again!”

These are just some among many such statements from hundreds of college students from across the world who joined the Chabad on Campus Pegisha hosted this past weekend by Chabad on Campus International in Crown Heights.

The remarkable thing is that just a few weeks ago, the entire notion of a large Pegisha in Crown Heights wasn’t even on the table. Due to the ever-fluctuating situation with the worldwide pandemic, the team at Chabad on Campus International opted for a flexible model where each individual Chabad House can schedule a weekend of their own, by providing grants and various resources to ensure it can happen for each Chabad House based on their local reality.

“In just a few weeks, a large number of Chabad on Campuses planned together to bring delegations to the Rebbe, and it just snowballed from there,” said Rabbi Eli Moshe Levitansky of Chabad at S. Monica College, California. “By the time the weekend arrived, the number of attendees had swelled to close to 400 people.”

Even more remarkably, the team at Chabad on Campus International sprang into action and pulled off the full-on Pegisha experience.

And what an experience it was.

“Initially, we weren’t really sure how the weekend would work out,” said Mrs. Nechama Tiechtel of Chabad at the University of Kansas. “In the past, attendance has been well over 1,200 students, and it’s really hard to match that energy. But it turns out that in a way, the Pegisha was even better, with the perfect balance of grandeur and personal touch.”

Rabbi Levitansky shared this sentiment: “It may have been overwhelming at times in the past. This year, students were able to connect with each other on a deeper level. The format also afforded the opportunity to bring students closer to immersive Yiddishe experiences such as being in 770 and spending more time farbrenging,”

Initial feedback from students bears this out quite clearly. “Growing up, I struggled a bit with my Jewish identity because I never had any Jewish friends, and didn’t go to a Jewish school. I knew that I loved being Jewish, but was never able to really share that. I had this side of me that was separated from the people around me. Chabad and the Pegisha experience not only brought those two parts together, but also celebrated it, which was so special in my opinion,” said Hannah Bura, part of the group from Chabad at UCSB in S. Barbara, California, under the leadership of Rabbi Gershon and Miri Klein.

The sheer enormity of so much Yiddishkeit quietly and realistically being carried out all around made an indelible impact on the students. In particular, the legendary hachnasas orchim of the Crown Heights community and the simple warmth of the family Shabbos dinner uplifted and inspired; for many, it was the highlight of their trip.

“I love being Jewish!” was a common refrain shouted in the streets over the weekend, and Baruch Hashem, that feeling has settled in. “I learned many lessons this weekend. One of the greatest things that I learned was I am so incredibly lucky and blessed that I am a Jew,” said Alexa Grines, also from UCSB. “I’ve heard about Jewish pride, of course, but never really saw it played out in real life,” said Ada Gindin from the Chabad at SMC, “it has been so touching to see that happen.”

“We are overjoyed by the impact and enthusiasm of this year’s Pegisha. The community of Crown Heights, the Rebbe’s community he described as holy, provides a powerful message of Jewish commitment and pride to our students,” said Rabbi Yossy Gordon, CEO of Chabad on Campus International. “G-d willing, there will be more Pegishas this year as we welcome the continued surge in Jewish life as restrictions lift.”