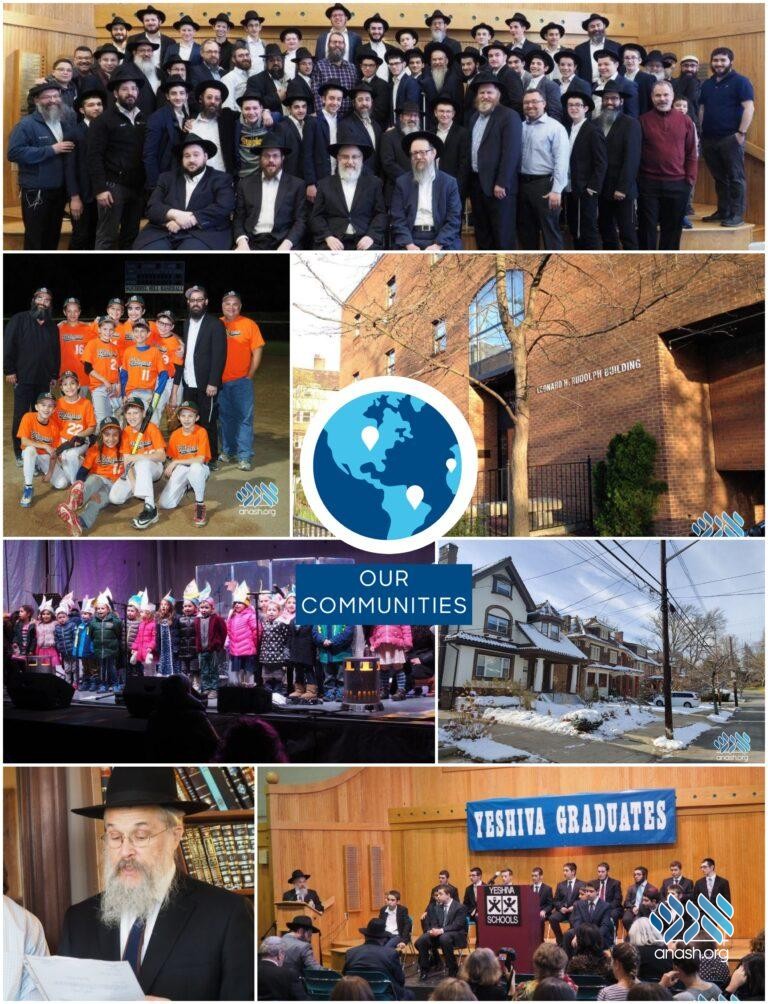 You may know it as Shpittsburg, but the anash community of Pittsburgh, PA has a rich history that goes back long before Shimmy Epstein first donned his iconic mustache.

In 1945, the Frierdiker Rebbe sent Rabbi Sholom and Chaya Posner to open a yeshiva school in this community. Over thirty years later, his granddaughter Mrs. Blumi Rosenfeld, who herself had grown up in Pittsburgh, and her husband Rabbi Yisroel Rosenfeld moved down as head shluchim to Western Pennsylvania. Today, there are around 200 anash families living here, ranging from newly married couples to retirees.

When the Rosenfelds moved down in 1978, the school was experiencing a period of rapid growth. Over the past few decades, the school has continued to stretch and grow; alumni began moving back to Pittsburgh and enrolling their own children.

The community has seen many new faces over the years, but the atmosphere and culture haven’t changed much, locals say.

“Chabad in Pittsburgh has grown, and there are new institutions and families that weren’t here 21 years ago,” Dr. Michael Moritz told Anash.org. “But the truth is, even as we’ve grown, we’ve remained tight-knit and family oriented. We’ve held on to our great values, too; this isn’t a gashmiusdik community. We put less focus on ‘things’ and more emphasis on living meaningful lives.”

Mrs. Chavie Goldshmid, who grew up 2 hours away in Cleveland, OH says the same. “The community here is decidedly not static. People don’t push themselves into a box and decide that this is who they are and this is who they’ll be for the rest of their lives.

“We genuinely want to learn and grow. There is a strong foundation and atmosphere of education here, and while everyone is truly accepted as they are, we simultaneously push ourselves and each other to be better.”

The community is made up of people who genuinely care about each other, and want to see each other shine and succeed.

“There is a real cohesiveness, true achdus here,” Dr. Moritz said. “We support each other in big and small ways. We go to each others’ simchas, and help out when someone gives birth. People go out of their way to make sure everyone who needs has a minyan for kaddish, and when a kid makes a birthday party, the entire class shows.”

That unity and mutual respect extends to the wider Squirrel Hill community as well, Mrs. Goldshmid says. “Everyone here respects the rabbanim, and the rabbanim respect each other. Twice a year, on Shabbos Hagadol and Shabbos Shuva, the entire frum community of Pittsburgh gets together to hear from them and be inspired. The non-Orthodox rabbis here respect the frum leaders as well, and many of the nonreligious families have friendships with their frum neighbors.

“Even the non-Jews here go out of their way to make us feel welcome. Unfortunately, Pittsburgh became infamous two years ago because of the tragic Tree of Life shooting. For weeks after that, when I would go to the park with my kids, I would have non-Jews from the neighborhood coming over to apologize, express their grief and let us know they are here for us.”

There is a connectedness within the various mosdos in Pittsburgh that makes living, davening, attending school and learning in this community a seamless experience. Everything is within walking distance, and the success of one mosed is the success of all.

“Recently, the school began undergoing a strategic planning initiative with the participation of the entire parent body,” Mrs. Goldshmid said. “We all want to see the school succeed, and are willing to go the extra mile to make that happen. A great deal of money, time and effort have been invested in this, and it’s already paying off: there is a clear vision for our school’s future, and we are meeting our goals.”

The driving force behind that vision is Rabbi Yossi Rosenblum, who directs the Yeshiva Schools of Pittsburgh. A legendary mechanech, Rabbi Rosenblum is famous for creating the Zekelman Standards, which are employed by chinuch institutions across the country. His passion and focus on excellence in chinuch have played a big role in the Yeshiva Schools’ great success.

The shluchim have invested in learning opportunities for adults, too. Rabbi Chaim Itkin was brought to the community to start a kollel for anash. People come to learn throughout the day, and there are also shiurim for both men and women. Rabbi Itkin’s mission is to get every member of anash involved in learning in the way that best suits them.

“We have great role models,” Dr. Moritz said, “and while we’ve lost some of the older chassidim who were a source of inspiration, we still have incredible leaders among us. It’s easy for a person to grow in their yiddishkeit here.”

Another great thing about living in Pittsburgh: There are lots of big, beautiful parks! Squirrel Hill is nestled in between two huge parks with lots of playgrounds, botanical gardens, and even an outdoor skating rink in the winter.