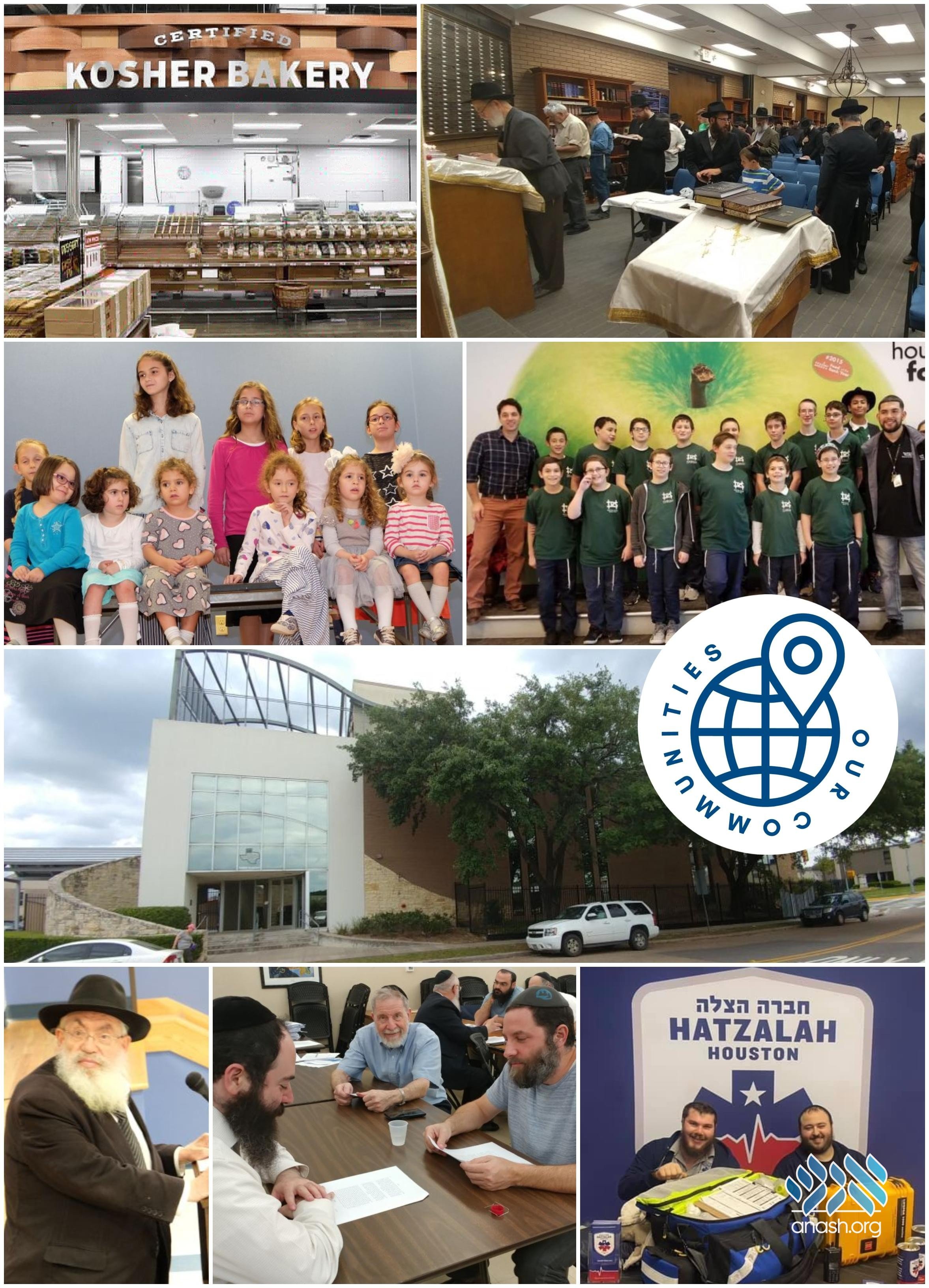 On Yud Alef Nissan, 5732 (1972), the Rebbe famously asked that seventy one new mosdos be opened in honor of his seventieth birthday. At the time, Rabbi Shimon and Mrs. Chiena Lazaroff were preparing to move on shlichus to Houston, Texas.

“The Rebbe agreed that my shlichus be counted among the seventy one mosdos,” shared Rabbi Lazaroff. “We were one of the first ten shluchim in the United States, but what was unique about our city was that, unlike the cities in which the shluchim had been moving to before then, in Houston there were almost no frum Yidden at all.”

Almost five decades later, the religious landscape has changed completely, with over 50 shluchim and 35 Chabad houses all over the lone star state, and a thriving frum community in Houston itself. Recently, the once small group of anash families living there has begun blossoming into a community of its own, as well.

“When I moved here 23 years ago, there were very few amenities for a Lubavitch family,” Mrs. Rivka Fishman, who directs programming at the Chabad day school, told Anash.org. “There were no restaurants, no fresh pas yisroel bread, no lubavitch shechita, and you had to plan ahead to get cholov yisroel milk and cheese.

“Today, there is a huge selection of kosher merchandise – everything you can possibly want, including restaurants of all types. There are lots of shaitel machers, too, which is a really nice perk.”

The school Mrs. Fishman proudly speaks of did not have the easiest start, shares Rabbi Chaim Lazaroff.

In 1977, Rabbi Lazaroff put an ad in a local Jewish newspaper announcing that Lubavitch had opened a Jewish day school. The school began with five children in the Lazaroff’s house; today there are over 160 children enrolled.

Soon after the Lazaroffs began their shlichus, the Rebbe told Israel’s President Zalman Shazar that Houston is the place from where they fly to the moon, and therefore it’s the sha’ar hashamayim, the gateway to heaven. On another occasion, the Rebbe told Rabbi Shlomo Cunin that in Texas, “they have people with big hats, and under their big hats they have big heads, so they must have grand ideas.”

Today, that expansiveness is felt in every area of frum life, and Rabbi Chaim shares that Houston is a place where those coming closer to Yiddishkeit can grow in their observance.

“Our community is a great home for families who are moving upwards in their journey towards frumkeit and adopting a Lubavitch lifestyle,” Rabbi Chaim told Anash.org. “Our school is not a cheder, but it’s a great option for the fresh lubavitcher who blends his Yiddishkeit with his American values. A full-fledged anash community can be intimidating for someone at this stage in their journey; in Houston, we provide the atmosphere and infrastructure that will help them feel comfortable.”

Originally, the young lubavitchers moving to Houston were those who had grown up there, whose families had come close to yiddishkeit through the local shluchim. In recent years, the community has begun attracting families from big cities who are searching for an affordable and comfortable place to call home.

“This is a no-income-tax state, so it can feel like getting an automatic raise when you move down,” said Pinny Bard-wigdor, a realtor who has helped many families relocate to Texas. “The frum community in Houston is growing at an approximate rate of 10% a year, which means that houses are gone as soon as they hit the market. A lot of the houses I’ve sold never even made it to the market! It’s crucial for people to reach out as soon as they start contemplating a move.”

Mrs. Fishman agrees on the importance of advance planning. “Most anash here work in specific professions. There are a lot of jobs for people who are driven and have skills, but this isn’t a city you can move to without a plan.”

In addition to the shluchim’s efforts to provide meaningful farbrengens and activities for anash, there are shiurim and other initiatives that are organized by members of the community.

“There is an active young N’shei here that is run by women in the community,” said Rabbi Chaim. “People take initiative in other ways as well – just recently, on Simchas Torah, anash pulled together a beautiful yet safe kiddush in the tents we were using for shul.”

Among those initiatives is one that the community is particularly proud of: a full fledged Hatzalah, which was founded by and continues to be run by local anash. The organization has also garnered participation and support from the wider frum community, with many individuals volunteering as EMTs and partnering financially.

Texans are known for their big hearts, and the anash community is no exception, locals say. There is a family atmosphere, and everyone supports each other through simchos and hard times.

“Someone in our community who suffered a terrible hardship shared that throughout those two difficult years, his family did not have to worry about a single meal,” Bard-wigdor said.

“That’s the kind of community we are.”

Want to further explore this community? Reach out to Rabbi Betzalel Marinovsky at 832-428-8604.

For expert help navigating the Houston housing market, call Pinny Bard-wigdor at 347-432-4968 or email [email protected] Pinny has been recognized as one of the top ten closing agents in his firm; let him help you, too!