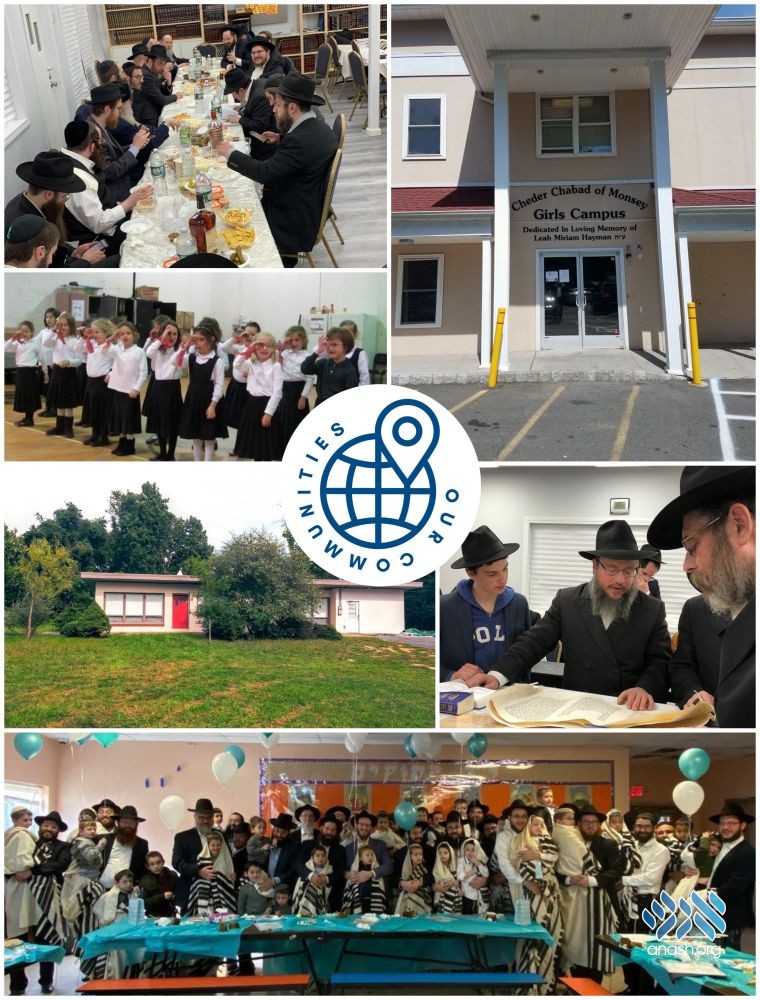 Our Communities: As Monsey’s community grew and housing prices climbed, anash began migrating to other areas. It was from this expansion that the blossoming community of Pomona, NY was born.

When Levi Eisenberg was growing up in Monsey, the community was very small.

“Back then, there were around 30 Lubavitch families in the Tzemach Tzedek shul,” Eisenberg told Anash.org. “Rabbi Dovid Wichnin, a”h, was the rov, and many of the shul’s members were non-Lubavitchers who were interested in Chassidus. My family moved away in the ‘90s; around that time, the original shul burnt down, and Rabbi Wichnin passed away.”

Following Rabbi Wichnin’s passing, the Lubavitch community began to wane; however, it picked up again in the early 2000s, when many new families started moving in. The cheder, which was started with only a few classes, grew rapidly. Over the next decade, it was joined by a girls’ high school and a mesivta.

With the exponential growth came a spike in housing prices around the Tzemach Tzedek area. As a result, families began moving to the neighboring villages of Airmont and Wesley Hills, among others.

When families began moving to Pomona about 7 years ago, it was viewed as ‘just another extension of Monsey’; no one predicted that it would become such a vibrant entity of its own! Within a few years, the community has grown to over 100 families, and shuls and mikvaos have sprung up all around.

“There are a lot of things that draw people to Pomona,” Eisenberg told Anash.org. “It’s very close to Crown Heights, which allows people to remain near their families and New York’s economic opportunities, while enjoying the benefits of an out of town community. You get it all: a spacious home in a beautiful suburban neighborhood with a strong chinuch network and a well-established frum infrastructure right next door.”

Pomona is divided into several areas; originally, the 202 highway divided the community into South Pomona and Pomona Heights. In the past couple of years, however, families have been moving into neighborhoods that lie between the two.

“The ‘Pomona community’ is really made up of many small communities,” said Rabbi Moshe Gourarie, who serves as mashpia in Beis Levi Yitzchok, one of the central anash shuls. “Because the families are so spread out, there are several shuls where Lubavitchers daven, and each one has its own unique atmosphere.”

Similar to Monsey, Pomona has a colorful mix of frum families living in close quarters. The community is large and diverse, and everyone gets along beautifully, locals share. Chassidim of all stripes and sephardi, ashkenazi, yeshivish, and modern orthodox families shop together, work together, and at some shuls, even daven together.

“When you have people from all walks of life coming together, it builds an atmosphere of true achdus and respect for one another,” said Naphtali Marrus, a local realtor who founded Chassidim at 110, a nusach ari shul with a very diverse kehilla. “It was a tough beginning here, but when I come on Shabbos morning and see a Likkutei Torah shiur with 35 people, 15 of whom are not even Lubavitch, I know that it was all worth it.”

Though each shul is a community for itself, there is much that unites the anash, even across the 202’s dividing line. Mikvaos are shared, chassidishe yomim tovim are occasionally celebrated together, and a majority of the families send their children to Monsey’s mosdos chinuch. In fact, the entire Pomona community relies on Monsey’s established infrastructure for their chinuch, kashrus, and various other needs.

Since most families are closely tied to Monsey’s Chabad mosdos, many larger events, such as the Yud Tes Kislev rally and Lag Baomer parade, are arranged through the cheder and Tzemach Tzedek shul. In addition, many people consult Monsey’s rabbanei anash, Harav Boruch Lesches and Harav Gedalia Oberlander.

In Pomona itself, smaller farbrengens and shiurim, especially those taking place on Shabbos, are hosted separately within each shul. There is some overlap during the week; for example, someone might attend a minyan in a shul that’s further from home. Programs are organized and attended by women from all over, and people come from North and South Pomona to enjoy Beis Levi Yitzchok’s library and attend Rabbi Gourarie’s shiurim.

“There’s a Wednesday night sichos shiur which is hosted every week in someone else’s home,” Yossi Wolfson, one of Beis Levi Yitzchok’s founders, told Anash.org. “The shiur travels up and down the entire Pomona – we try to include all of the different elements and areas. It’s real community hafatzas ha’maayanus!

“There is also a true sense of people helping each other; there are many times when the whole community comes together to support one another.”

At the end of the day, however, the kehilla you’re part of boils down to which neighborhood you live in and the shul you attend. As a result, choosing a home in Pomona can be a charged decision.

“As a realtor, I take my role in building this community very seriously,” Marrus told Anash.org. “It’s not just about selling a house, it’s about making the right shidduch. I listen to the wife, I listen to the husband, and I tell them what they need to know to figure out which neighborhood is right for them.

“To me there is nothing happier than seeing a family settled where they belong!”