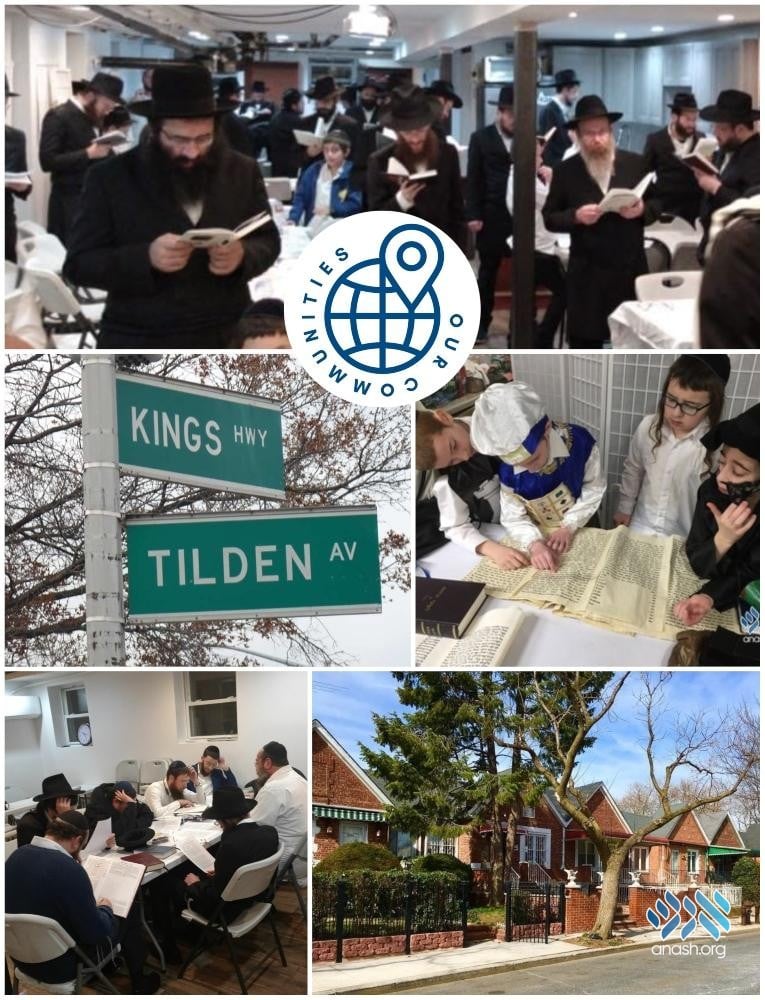 Our Communities: It started out as a small colony of city dwellers seeking affordable housing. Six years later, it’s a vibrant, growing kehilla.

Years ago, East Flatbush hosted a thriving Jewish community with many frum families and several shuls. A rich atmosphere of warmth and brotherhood was felt in the neighborhood streets.

“I lived in East Flatbush for 22 golden years,” Rabbi Meir Rottenstreich told Anash.org. “Everyone was so close and friendly with each other! On Simchas Torah, we used to go to each house to make kiddush. Come Yud Shvat, someone would chazar a maamar, and no one would be saying a word! On Yud Beis Tammuz, we’d farbreng, and on Chol Hamoed, we’d sit with the elder Rabbi Korf…

“Then, the community started to disintegrate. The neighborhood began to feel unsafe, and since houses were similarly priced in Crown Heights, people began moving away. In 1982, the Rebbe told me I should move to where my wife wants to be. She found a house on Montgomery Street, and that’s where we are still living today.”

Interestingly enough, while similar housing rates was one of the factors that pushed people to move out all those years ago, it is today’s steep housing market in Crown Heights that has so many young anash families heading to East Flatbush.

“In the beginning, most of the families living here would have probably preferred to live in Crown Heights,” says Rabbi Yakov Yosef Raskin, an active member of the growing community. “But housing was more affordable and that was what attracted people. Slowly, however, as the community began to grow, these pioneers began to see the wonderful benefits of living in a close-knit community. The unity and warmth amongst the community members, the level of comfort felt here- no one remains a stranger for long!”

Rabbi Raskin serves as an interim rabbi of sorts. He offers guidance on various community matters and takes care of rabbinic tasks such as the sale of chometz before Pesach. There are daily minyanim for shacharis and maariv, and minyanim for every tefillah on Shabbos. Rabbi Raskin gives a drasha each week following krias hatorah.

“The shul is currently located in the home of Dovid Nissan Jacobs, who was the first to move to this area with the vision of starting a community,” Rabbi Raskin shares. “Baruch Hashem, through his and his wife’s hard work and unwavering devotion, the community has experienced amazing growth!”

A highlight of Shabbos in East Flatbush is a warm seder nigunim followed by a clear maamar being given over as Shabbos comes to a close.

“I’ve been here about 5 years,” says Levi Gajer, when asked about the kehillah’s growth. “The first year, there were no daily minyanim, only on Shabbos. Now there’s a minyan for shacharis and one for maariv every day.”

A True Sense of Community

One of the upsides to living in a smaller community is that it often operates as a family of sorts. Without the familiar framework of family and old friends, people quickly come to depend on and be there for one another. Neighbors are searching for commonalities instead of noticing differences.

“I recall one evening when I was home with a new baby and couldn’t leave my house, and the baby needed formula,” another resident shared. “We have a community WhatsApp group, so I decided to try my luck and see if anyone near me had some to spare. Immediately, a neighbor reached out to let me know that he was in a store and would purchase some and bring it over.”

On Shabbos, a diverse crowd sits and farbrengs. In Crown Heights, shul demographics are often determined by age or ‘style’; in other communities, there may not be a shul for every class, but people often gravitate towards those with whom they share similarities. Here, however, rather than seek companionship within their comfort zones, people learn to mesh with all types.

When hearing the residents of East Flatbush describe the warm, united atmosphere that is felt within the community, one is immediately struck by a sense of deja vu. It is clear that the vibes that were so cherished by those who lived there 40 or 50 years ago, are once again strongly felt on the very same streets!

Chinuch is relatively simple for this community; buses from the Crown Heights mosdei chinuch drive through the neighborhood, bringing the children to and from school. Even on Shabbos, the kids enjoy a healthy social life, with special programs in shul and mesibas Shabbos in the afternoon. Those who wish to find care close by for their younger children are in luck – there are several babysitting groups operating inside the neighborhood!

While there are no kosher grocery stores within walking distance of most East Flatbush families, the well-stocked supermarkets of Crown Heights are only a short drive away. In fact, some of the bigger stores will deliver to the area, making it a convenient option for those living there. Recently, popular takeout joints have begun delivering to the area as well.

As part of its initiative to build a strong, united community, activities are organized throughout the year. For Chanukah and Purim, the community gathers at events that are put on for the whole family. There are farbrengens every Shabbos, as well as in honor of Chassidishe yomim tovim. The women have a monthly gathering where they enjoy a speaker and activities over which they can bond and form new friendships with their neighbors.

Every family moving into the neighborhood is warmly welcomed and invited to join the community chats- there are separate WhatsApp groups for men and for women.

“It’s a very welcoming, tight knit, chassidishe community,” says Sholom Huber, who moved to East Flatbush several summers ago. “When I think about the community board members, it’s amazing how active they are. It’s a real asset to the community to have people like that here- they don’t look for accolades, they just get out and do.”

As the community experiences rapid growth, they are challenged to keep up. Recently, as they stood in the crowded shul, an exciting realization dawned on them: the kehilla had outgrown the space that was hosting it! For the yamim noraim, a generous landlord in the area made a building available to use as a shul; over 200 men, women and children attended the minyanim. The shul board is currently searching for a property that can serve as a shul and community center.

The community recently reached another exciting milestone: they’ve begun working with an architect to draw up plans for a mikvah that’s being built right in their neighborhood! As families continue to move in, and the infrastructure develops, there is another need that becomes more apparent. The time will come when it will be necessary to hire a rav who will enhance the kehilla’s growth.

Growth is invigorating; it is inspiring, and it is exciting. It can also be quite expensive! Each of the above-mentioned developments requires a great investment of resources. While planning for the future, there is both a focus on ruchniusdik growth as well as the practical needs, such as fundraising for the mikvah and shul. As the Anash kehillah of East Flatbush continues to grow and thrive, so does the dedication of those who have set out to build it.

Mosdos and Amenities: The anash shul in the Remsen Village area of East Flatbush is Bais Avrohom Yitzchok. Most other religious needs, such as chinuch and kashrus, are accessed through nearby Crown Heights, a mere 10 minute drive away. Architectural plans for a Chabad mikvah in the area are currently underway!

There is a formal committee which sees to the physical and spiritual needs, and guides the direction of the kehilla.

Nearby Anash communities: Crown Heights is a 10 minute drive; some say they find it an easy walk. “It’s like living in Crown Heights, but with cheaper housing,” a resident told Anash.org.

To see a community map with Anash families, click here.