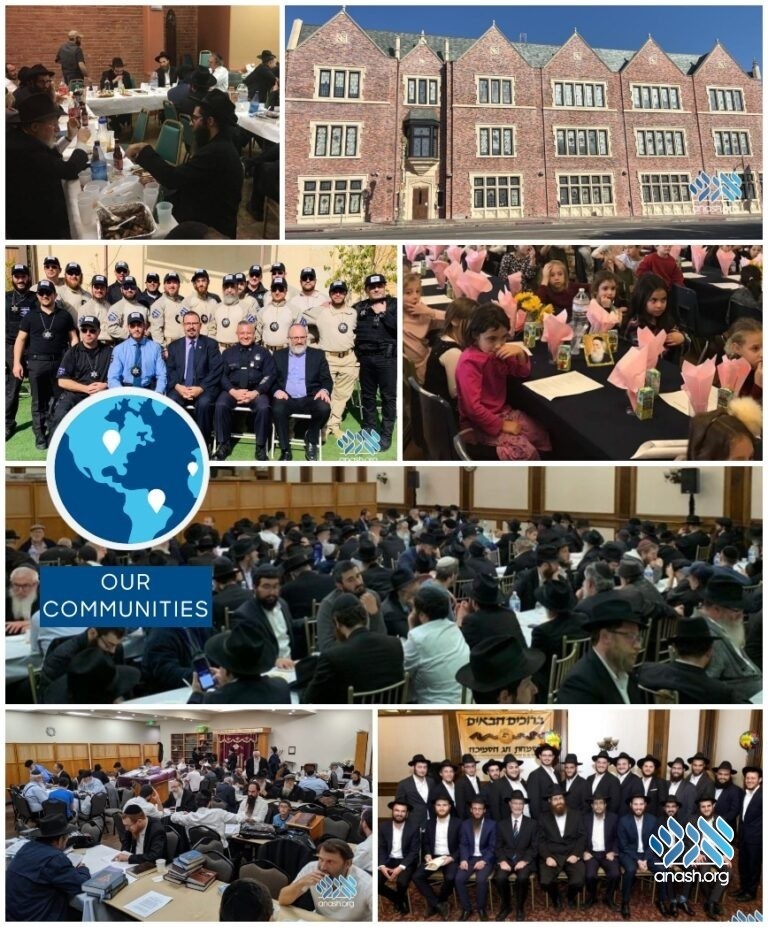 Our Communities: Home to several prominent Chabad rabbanim, a quality chinuch system that takes kids through their late teens and a bustling kosher scene, the anash community of Los Angeles, CA is proud to call this city home.

When exploring the anash community of Los Angeles, California for the first time, its sheer size may come as a surprise. Made up of kehilos in several neighborhoods in and around LA, it is estimated to include around 750 families, the largest concentration of anash outside of Crown Heights.

In 1949, the Frierdiker Rebbe dispatched Rabbi Shmuel Dovid Raichik as the first shliach to Los Angeles. Sixteen years later, the Rebbe sent Rabbi Shlomo Cunin to serve as head shliach to the West Coast. Over the next few decades, yiddishkeit bloomed across California and the frum population grew exponentially.

A great source of pride, locals say, is the exceptional unity that exists in this city.

“In all the years, and with all of the growth, there has never been machlokes here,” said Rabbi Yanky Raichik, who grew up in LA and now heads the chevra kadisha. “This is something our community has been blessed with.”

Rabbi Mendel Spalter of Yeshiva Ohr Elchonon agrees. “I’m living here for twenty two years, and in all this time I can not recall there being any friction, not even on the ‘hot button issues’. This is despite the fact that there are people here with very strong opinions on opposite sides of those debates.”

The Chabad schools and most kosher establishments are centrally located in the Hancock Park and Pico neighborhoods. There are also smaller anash kehilos nearby, such as the ones in North Hollywood and the Valley.

“The schools work together under the same umbrella, which benefits everyone tremendously,” Rabbi Spalter said. “As a result, there is excellent, seamless chinuch that begins in preschool and continues through high school and zal – kids are able to stay here until they are nineteen! In many places, parents have to send their children away much earlier on.”

The collaborative atmosphere extends to other mosdos, too; several times each year, the anash shuls get together to organize city-wide gatherings to mark chassidishe yomim tovim. On Yud Shvat 5780, just one month before COVID turned everyone’s lives upside down, the community was fortunate to hear from Rabbi Leibel Groner a”h, whose farbrengen attracted a crowd of over 600.

Over the past year, Los Angeles has acquired something of an unfortunate reputation, with extended COVID lockdowns being forced on its residents, and riots plaguing the city. Most recently, reports of anti-semitic attacks on local Jews have gone viral on social media.

When speaking to local anash, however, it’s clear that the community is pushing through the challenges, and is, in fact, thriving. In fact, many of them cite the high cost of living as the main obstacle to settling and remaining in LA.

“The COVID restrictions were somewhat draconian,” said Dovid Hoch of Hancock Park, “but it didn’t affect us as much as people imagine. We shut down shuls for a month, but then began to have outdoor minyanim, and before long we were able to move indoors.

“Yes, the local government may have wanted us to wear masks in the street, but most people didn’t do that. Restaurants were closed, which was hard – eating out is a big part of the culture here.”

As housing prices in the Pico and Hancock Park neighborhoods continue to rise, many families are choosing to settle in Valley Village, a wonderful community located a mere 15 minutes away from the Chabad schools.

“Housing prices in the Pico area are more expensive,” says realtor Michelle Hirsch. “For example, a condo in that area costs almost double that of a condo or townhouse in Valley Village, and apartment rentals cost, on average, $500 more per month in Los Angeles then in its surrounding neighborhoods.

“Rabbi Abend of Chabad of North Hollywood is an incredible individual, and the shul is thriving. Also, the suburbs have not seen the same level of crime as the city. The cheaper housing, combined with the neighborhood’s relative safety makes this area more palatable for a family who is thinking of relocating.”

When it comes to self defense and security, the Los Angeles Jewish community is lightyears ahead of others in America. Magen Am, an organization founded by Yossi Eilfort, who grew up on shlichus an hour and a half away in La Costa, trains members of the community for the role of protecting and securing the local Jewish establishments.

During the summer of 2020, when rioters began attacking Jews on the street and vandalizing Jewish institutions, Magen Am’s volunteers began patrolling the streets of the Jewish neighborhoods. A whatsapp group was opened for the purpose of alerting the community of threats in the neighborhood, and giving residents a way to reach out for help as incidents were occurring.

The emphasis placed on protecting their own does not stop anash from reaching out to the wider community; mivtzoim is an area in which they excel. Rabbi Shmuly and Shterny Gurary, who run the mivtzoim organization LA Lamplighters, orchestrate major efforts throughout the year to bring yiddishkeit and yom tov joy to the city’s streets and institutions of all types.

“This is not the Los Angeles of 50, or even 30, years ago,” said Rabbi Shimon Raichik, a well known rav anash and leader of Congregation Levi Yitzchok. “This  city was a desert; now, there are countless shiurim,  true baalei tzedakah, and a cheder with hundreds of kids. Yiddishkeit is thriving here!”

For help navigating the housing market, contact Michelle Hirsch at (818) 512-4226 or visit www.michellehirsch.com.