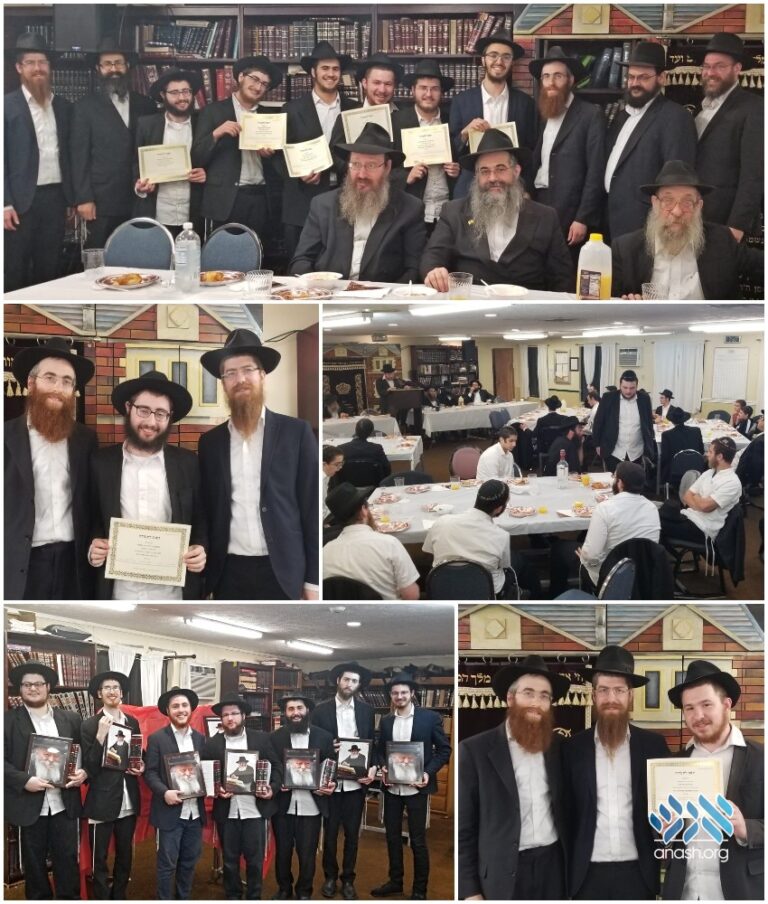 Yeshivas Tomchei Temimim of the Poconos, which extended learning well into the summer, celebrated the completion of a unique and successful year.

In accordance with the Rebbe’s wishes, Yeshivas Tomchei Temimim of the Poconos continued extended learning into the summer and held a celebration to mark the completion of a unique and successful year.

At the event, the completion of Baba Metzia was celebrated, the bochurim who learned the entire mesechta by heart were rewarded, and the achievements of the temimim throughout the year were recognized.

The evening was opened by the menahel of the Yeshiva, Rabbi Mendel Silman, who began the evening with thanking Hashem and the Rebbe for the brachos that enabled us to have such a successful year, and continued with words of appreciation, thanking all the staff, ruchni and gashmi, for their endless efforts invested into the students.

A siyum mesechta was made by one of the talmidim, a talmid spoke about his experience in Yeshiva over the past 2 years, and how he felt he changed and grew and thanked his rebbeim and peers for it.

One of the shluchim spoke about the uniqueness of this yeshiva, the care and input into every talmid, and encouraged everybody to increase in sensitivity towards each other during the period of the 9 days, and in general.

The keynote speaker was Rabbi Berel Lipsker, a member of the Hanhala Ruchni, who talked about the importance of respect during davening- not talking in the middle of davening and answering amein.

Rabbi Shmrayhu Matusov, Mashpia, read a letter of the Rebbe on the importance of learning chassidus in Tomchei Temimim. The Mashpia Rabbi Shmuel Newman, who ran the program to complete the mesechta, gave out the awards for those talmidim who completed it, and talked about how learning consistently for a bachur is a given.

Rabbi Mendel Hendel, director, addressed and praised them for their Yiras Shamayim and Emunah in Moshiach. Rabbi Segal, mashgiach, awarded the talmidim who excelled in shmiras hasedorim. The program was also attended by the yeshiva’s hanala gashmi, Rabbi Yossi Soble and Rabbi Menachem Baruch.

After the program, there was a farbrengen led by the rosh yeshiva Rabbi Aizenman and the mashpia Rabbi Gurevitch, which continued late into the night.