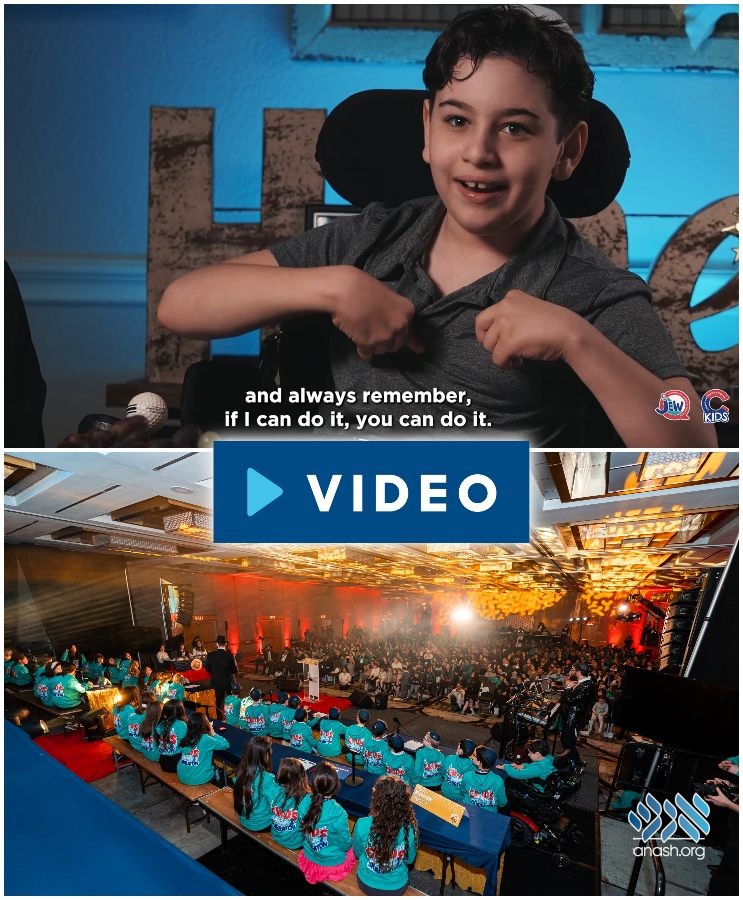 Noam Swisa, an 11-year-old with Cerebral Palsy, blew away the audience when he represented his Hebrew School at this year’s JewQ International Torah Championship.

As soon as Noam Swisa heard about the JewQ championship coming to his Hebrew School in Plano, Texas, he decided he was going to win. “Noam told me, “I’m going to New York!” his mother says. “He had his goal in mind. He was going to make it to the championship.”

Shlucha Esther Horowitz, director of Chabad Hebrew School of Plano, Texas, has been a big supporter of Noam and his JewQ journey over the last few months. “There’s something so inspiring about watching Noam come into Hebrew School every Sunday ready to learn,” she says. “He’s always so excited.”

Noam’s condition, Cerebral Palsy, limits his ability to walk, jump, and talk. But it doesn’t limit his extreme motivation and effort.

Noam ended up scoring the highest on all three JewQ tests—landing perfect scores. He also won the schoolwide championship, landing a first-place trophy. “We couldn’t be prouder that Noam represented our school onstage at the International JewQ Championship this year,” says Esther.

Noam and his family are very involved at Chabad of Plano, where they go to synagogue and Hebrew school. “Chabad has become part of our family,” Noam says.

Hundreds of students and parents were inspired by Noam’s journey. His video was received by a standing ovation and his live appearance competing onstage at the JewQ final championship brought his final words of inspiration to life. “Try your best future JewQ students,” Noam encouraged the crowd. “If I can do it, you can do it.”

“Noam’s determination and accomplishments are truly inspiring,” says Rabbi Mendy Kotlarsky, executive director of Merkos 302. “He exemplifies the JewQ message that with determination and hard work there is nothing you can’t do.”