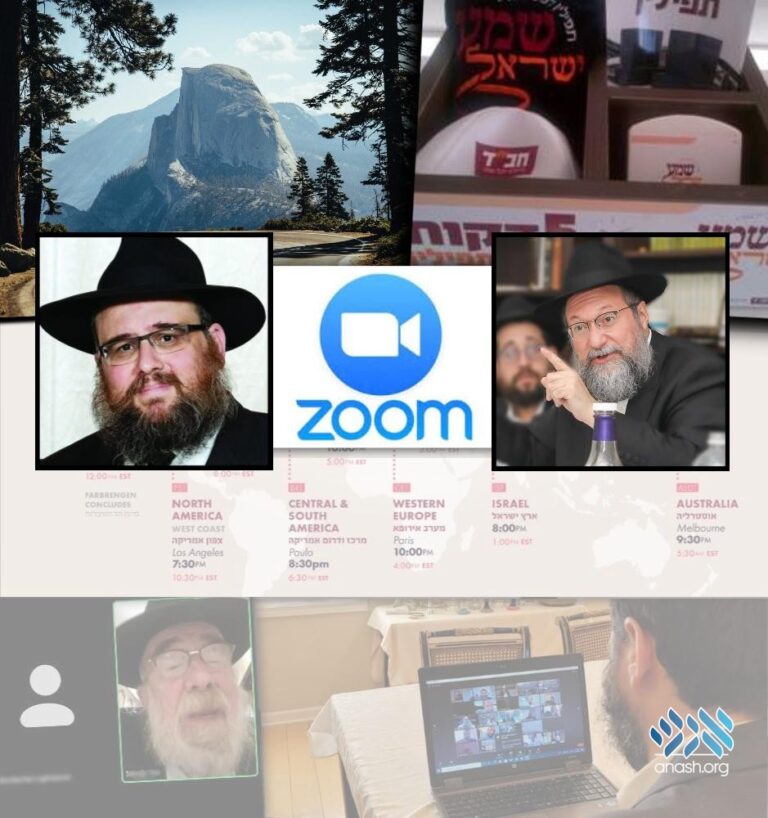 Stories from the Longest Zoom: Months after two bochurim took a detour to visit an anti-religious lawyer in a small town, they were amazed to learn that they had brought about a reunion between estranged relatives.

It was the summer of 5750 (1990) and my friend Rabbi Efraim Mintz and I were on Merkos Shlichus in Fresno, California, and its surrounding cities.

Rabbi Levy Zirkind, who had recently been sent on shlichus to Fresno, brought us down to help him establish a relationship with Yidden in the area. A local balabos took us under his wing and did whatever he could to help us in our mission. Over the summer, we grew close to him.

Towards the end of our time there, we told our new friend that we would be traveling to the Yosemite National Park. Assuming that this was our next merkos shlichus destination, he said in surprise, “You’re going to Yosemite? There aren’t any Jews living there!”

After a moment’s thought, he remembered that in a small town on the way to the park, there lived a Jewish lawyer with whom he was acquainted. This lawyer, he told us, wasn’t involved in Yiddishkeit – he had run off to this little village, far from anything and everything Jewish.

As it happens, this leg of our trip was not part of our official merkos shlichus; our plan was to visit the park and set up a mivtzoim stand for tourists.

As we were heading toward our destination, we noticed a sign with the name of the village our friend had mentioned, Yosemite Lakes. We assessed the situation, and realized that with the limited information we had, it was highly unlikely that we would find this lawyer. We continued on.

It didn’t take long for the guilt to set in. Here we were, coming from a summer as merkos shluchim, driving by a village where we knew a Yid lived and we weren’t going to at least try to find him? We decided to turn back and give it a shot.

What we found was an intensely remote and isolated town. Forests and mountains could be seen in every direction; people, not so much. There was a little real estate office on the side of the road, and the man we encountered there knew of the man we sought and told us where to find him.

We followed his directions to the lawyer’s home, and were happy to find him and his wife there. He opened the door and asked, “What are you doing here?!” After a short chat, he invited us in to talk some more.

As the conversation progressed, he had many questions for us, and we tried to answer as best we could. At one point, he began venting to us about his daughter, who had gone to Palo Alto for university and become close the Levins, who are shluchim there. She became frum, which had greatly upset him.

Our visit lasted three hours, throughout which the lawyer was completely engrossed in a deep and intellectual conversation spanning many complex topics. He quickly warmed to us, and even agreed to put a mezuzah on his door and lay tefillin before we left.

As we drove off the dirt road and toward Yosemite National Park, we were surprised to see that traffic had come to a standstill, with dozens of cops and fire trucks directing everyone away from the park. We soon learned that a forest fire had broken out; the park was immediately closed and all tourists were forced to evacuate.

Needless to say, there were no tourists and no tefillin stand. Disappointed, we returned to Fresno, and eventually continued on to Yeshivas Ohr Elchonon in Los Angelos where we would be spending the year as shluchim.

Months later, on Yud Alef Nissan, I attended a farbrengen in Crown Heights with hundreds of chassidim, at which a shliach to Pittsburgh, PA got up to speak.

He told the crowd about a woman in his community who had become frum in California. Her father, who was a wealthy lawyer, was angry about the path she had chosen; her parents had completely detached themselves from her. She would speak to the shliach about it constantly. Sensing her great pain, he advised her to write to the Rebbe about it, which she did.

One summer day, there was a knock at her door. She answered it and was shocked to find her parents standing there! She was overjoyed at the opportunity to re-establish her connection with them, and asked what had caused their change of heart.

Her father responded by telling her about two young Rabbis who showed up at his home, and about the long conversation he had with them. “I realized these religious Jews aren’t so bad,” he said, “and suddenly felt a longing to be reconnected with my daughter and grandchildren. This is why I came.”

As the shliach concluded his story, I realized that this woman was the daughter of the lawyer whom we had met on our trip! We thought we had randomly found him as a result of our friend’s tip; at that farbrengen, we learned that it was the Rebbe who had sent us there to reunite him with his daughter and answer her plea.

It’s not uncommon for young lubavitchers to wonder, how can we know today that we are being sent on the Rebbe’s shlichus?

To them I say, this story happened before Gimel Tamuz, yet the Rebbe did not directly tell us where to go. The Rebbe found a way to send us to a Yid living in isolation in a remote village, and the Rebbe continues to send each of us to the place where our shlichus awaits us.

Thank you to Rabbi Efraim Mintz for assisting with this story.

More from this series:
The Rebbe Answered Before I Even Asked – Rabbi Lazer Lazaroff
The Light Night Encounter That Saved a Shlichus – Rabbi Itche Meyer Lipszyc
The Dream That Turned Over a City – Rabbi Mendel Block