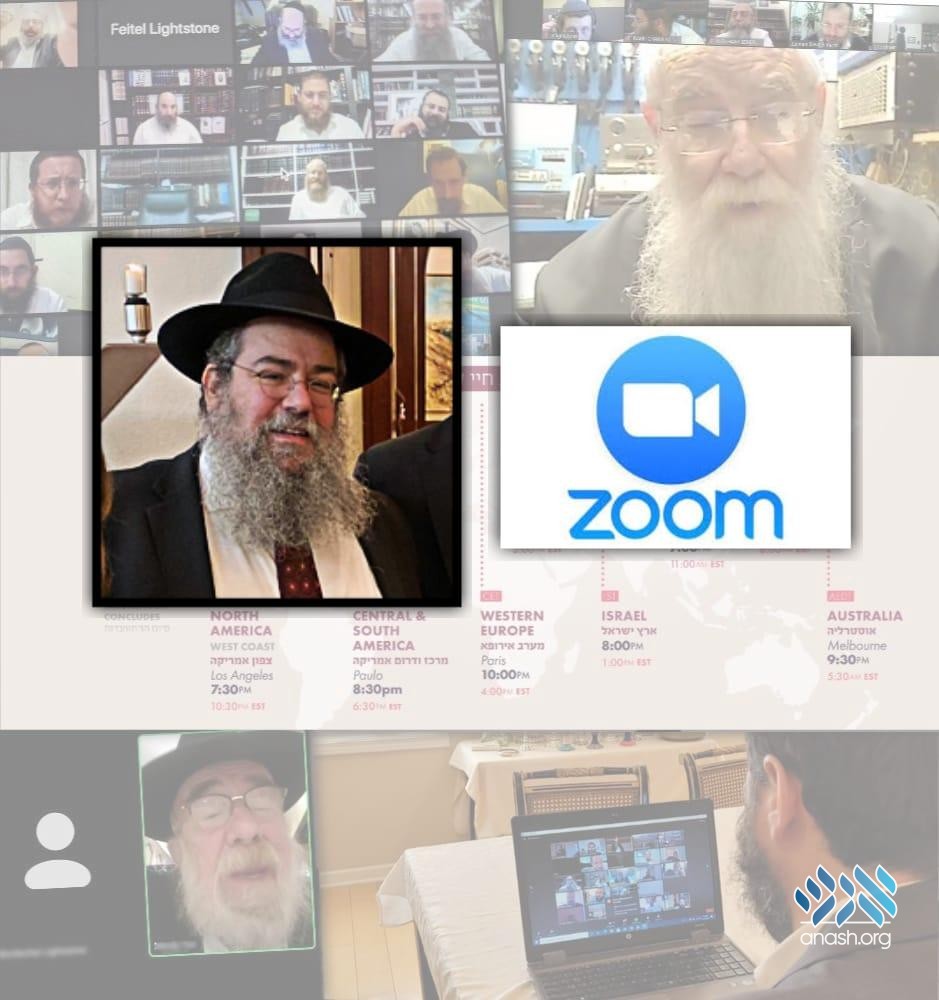 Stories from the Longest Zoom : Anash.org is pleased to present a new series of stories told by shluchim on the historic five day virtual farbrengen.

As told by Rabbi Lazer Lazaroff

On Friday, Chof Beis Sivan 5750 (1990), Rabbi Lazer Lazaroff, who runs the Aishel House in Houston together with his wife Rochel, was standing in 770, davening mincha.

At the time, Rabbi Lazaroff was a kollel yungerman of 23, and davening with the Rebbe’s minyan was a regular practice. Today, however, was different: Rabbi Lazaroff had received some worrisome news regarding his wife, news that left him feeling broken up inside.

As the Rebbe finished davening and began walking out of the room, Rabbi Lazaroff stepped back. It was common for bochurim and yungerlight to hang back, not wanting to be seen.

“The Rebbe had already walked past when suddenly, he stopped, turned around and looked straight at me and gave a strong wave with his hand.Then the Rebbe turned and kept on walking. I got very emotional as I realized the Rebbe saw my pain and was telling me not to worry.

“The Rebbe was so clearly focusing on me that my friends noticed and began asking me, ‘what is this? What’s going on?’ It was private, and I didn’t want to share, so I made as if it was nothing.

“As I returned home before Shabbos, my wife told me that the concern we had had was over – miraculously cleared up – and there was nothing to worry about!”

Twenty years later, Rabbi Lazaroff was planning the building of the Aishel House, a facility that provides affordable lodging and support for patients and their families who are traveling to Houston to receive medical care. One of the most important meetings he had around this time was with a man he was asking to be the main contractor.

The contract in question was quite a big one. He had some connections with this contractor, and in a bold move, he planned to ask him to take on the entire multi-million dollar project for this noble cause, pro-bono.

Before the meeting, he went to the mikvah and prepared to write a tzetel, a letter to the Rebbe.  As he was exiting the mikvah, he heard a beep coming from his blackberry, signalling that a message had come in. It was from his friend, Rabbi Avremi Kievman.

“I’ve been going over my yoman that I wrote 20 years ago, and it says that on chof beis sivan tof shin nun, the Rebbe walked out of mincha encouraging the singing, when he suddenly turned and waved in a strong way to Lazer Lazaroff! And I’m thinking, here you are, my friend, and yet you never told us what this was about!”

Rabbi Lazaroff told him the story, then sat down to write a letter to the Rebbe asking for a brocha about the approaching meeting.

Needless to say, the meeting was a great success. The contractor took on the entire project, and even agreed to do the work at cost price.

“The ping from my blackberry came as I was leaving the mikvah, before I even had a chance to write,” Rabbi Lazaroff concluded.

“I received my answer before I even asked!”

Thank you to Rabbi Lazaroff for assisting with this article.