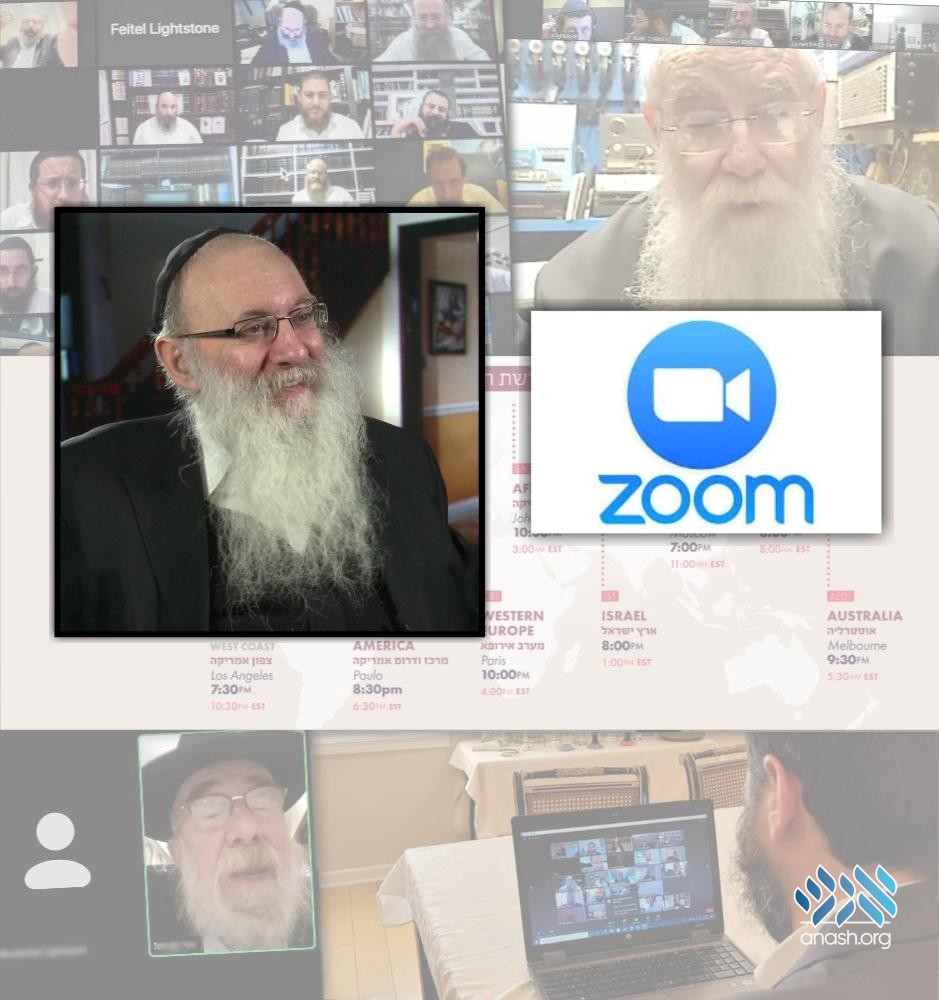 Stories from the Longest Zoom: A ‘chance’ meeting between a shliach in despair and a yungerman from Crown Heights set off a surprising chain of events, ultimately resolving a community’s terrible plight.

It was the evening of Chof Cheshvan and Rabbi Itche Meyer Lipszyc was standing at the Ohel, his mind racing as he agonized over the impossible situation he found himself in.

In 1992, following the fall of the Iron Curtain, the Rebbe sent Rabbi Lipszyc and his wife Leah on shlichus to Crimea. Several months before, the community had fallen victim to a nefarious scheme: a group of unscrupulous Israelis had decided to take advantage of the lack of knowledge common among Jewish communities in the former USSR.

Clad in chassidishe clothing and long beards, they approached the rosh hakahal  and told him that they were there to help. They offered to check the sifrei torah, and after selecting the three that were in good condition, they claimed they had found big mistakes and would need to take them to Eretz Yisrael to have them fixed.

After giving their names, addresses and documentation – which later were discovered to be fraudulent – to the head of the community, they made off with the sifrei torah, never to be heard from again. The three sifrei torah that they left behind were in such bad condition that it was questionable whether they could be fixed, and if it would be worth doing so.

This is the scenario that greeted Rabbi Lipszyc when he arrived at his new makom hashlichus. Thankfully, he was able to borrow a Torah from 770 for a limited amount of time.

Over the next few years, the Rabbi Lipszyc tried endlessly to find a sponsor for a new sefer torah, or at least to cover the cost of fixing one of the old ones. Finally, he found a baal habos in America who was willing to sponsor the repair of one of the community’s torahs.

To Rabbi Lipszyc’s surprise, when he brought the good news to the rosh hakahal, the man flatly refused to allow him to take the Torah to New York for repairs. He insisted that he would not take a chance of being fooled again in such a tragic way. Rabbi Lipszyc tried to argue with him, pointing out that he had already been a trusted Rabbi in the community for several years, but it was to no avail.

Finally, Rabbi Lipszyc managed to gain his trust by handing over an expensive item as a mashkin – security – and he was soon on his way to New York with his precious cargo.

Upon arriving in New York, Rabbi Lipszyc brought the torah to Rabbi Moshe Klein, who examined it and concluded that fixing it would indeed require extensive and costly work, and would take about six months to complete. Wanting to help Rabbi Lipszyc out, he offered him a good price – $8,000 – for the job. After reconfirming the sponsor’s commitment, Rabbi Lipszyc accepted the price.

Immediately upon returning to Crimea, Rabbi Lipszyc was challenged by the head of the Jewish community. “Where is our Torah?”  He demanded to know. After some explaining, however, he felt reassured that it was in good hands.

“Six months later, the Torah was ready, and with great simcha, I called the sponsor to share the good news,” Rabbi Lipszyc shared. “My happiness, however, was short lived.”

The sponsor explained that he had had a reversal in his economic situation, and could not meet his commitment. With a heavy heart, Rabbi Lipszyc called the sofer and told him what had happened, and promised that he would put in every effort to find a new sponsor. Please do it quickly, was Rabbi Klein’s reply. He had put a heavy investment of his own money into completing the project, which he now needed to recover.

“Over the next year, I tried, and tried, and tried, but could not turn up the money. I was now under tremendous pressure. The rosh hakahal kept demanding to know, ‘where’s our Torah?!’ On top of that, I knew that Rabbi Klein had laid out a large sum of money and needed it back.”

A year passed, and one day a letter arrived from Rabbi Klein, who had patiently waited for as long as he could.

‘Dear Itche Meyer,’ the letter began, ‘I’m very sorry, but I have given as much time as I could. I have a lot of money tied up in this Torah, and I can’t wait any longer. By Rosh Chodesh Cheshvan, I will have to sell the Torah and take my money out, and if there is leftover money, I will give it back to you.’

“Though the letter was written with concern and empathy for my position, I was devastated. If, Heaven forbid, I lost this Torah, my shlichus in Crimea would be over!

“I contacted Rabbi Klein and begged him to bear with me a bit longer. He kindly agreed to extend the time limit by three weeks, until chof Cheshvon, but told me that unfortunately, he could not put it off any longer than that.”

It was the evening of Chof Cheshvan, and Rabbi Lipszyc still had not found a donor. With nothing left to be done al pi teva, he went to the Ohel to pour out his heart.

“I personally like to go to the Ohel at night. It’s quiet, I’m not distracted by other commitments, and I have plenty of time to do hachanos – say tehillim, learn a maamar, write a pan – I have all night.

“I wrote to the Rebbe about my plight and explained that if, chas veshalom, I would lose the Sefer Torah, my shlichus in the Crimea would be over, as the kehilla would never trust me again.

“At 4:00 a.m. I came out of the Ohel and entered the room where the video was playing. All was quiet, aside from one yungerman from Crown Heights who was sitting by a table and writing his pan. It dawned on me that if he was here at such a late hour, it must be an urgent matter for which he needed the Rebbe’s help.

“I knew who he was, but I had no clue as to why he was there, nor did I know what his personal capabilities were. I simply saw a young man who seemed to have problems of his own. So, I walked over to him and asked him if he would be willing to listen to a story. He agreed and stopped writing to listen.

“I told him the story of the sefer Torah, and I ended off by saying: ‘It seems to me that if you are here at 4 a.m. there is something urgent you need from the Rebbe. Imagine, if you save our sefer Torah, and my shlichus, the Rebbe will ‘owe’ you big time, and will, b’ezras Hashem, fulfill your request!’”

To Rabbi Lipszyc’s disappointment, the man burst out laughing and exclaimed, “What a sales pitch!” It was obvious that he was not really considering it.

Before parting, Rabbi Lipszyc made one final request. “Please,” he begged the young man, “just promise me that you’ll give it a thought while you’re in the ohel. If the Rebbe wants you to do this, he’ll find a way to get the message to you.”

Rabbi Lipszyc handed him his calling card and said, “In case the Rebbe does get the message to you, you’ll need to know how to find me.” Once again, the yungerman laughed and shook his head, saying only, “You’re good!” with great amusement. He sat back down to continue writing his pan, and Rabbi Lipszyc went back to Crown Heights.

At 6:00 AM, Rabbi Lipszyc’s phone rang; it was the young man he had met two hours earlier.

“To my surprise, he told me that he had already made all the arrangements with Rabbi Klein, and that I could pick up my Torah. He then recounted the events of the past two hours.”

“I went into the Ohel,” the man began, “and while standing there it dawned on me that this was an interesting situation: I was standing in the ‘company’ of three Rebbes – the Rebbe, the Rebbe Rayatz, and, as it’s Chof Cheshvan [which is the Rebbe Rashab’s birthday], the Rebbe Rashab.

“Suddenly, I remembered a story connected with the birth of the Rebbe Rashab. When the Rebbe Maharash’s wife was expecting the Rebbe Rashab, she had a dream that the Alter Rebbe and the Mittler Rebbe came to her, dressed in their Shabbos clothing and with smiling faces. They wished her mazal tov and told her that she was carrying a very special neshama.

“The two Rebbeim recommended that she commission the writing of a sefer Torah in honor of this child’s birth. When she awoke, she shared her dream with her husband, the young Maharash, who was not yet Rebbe. The Rebbe Maharash then told his father, the Tzemach Tzedek, who asked for her to come in and personally tell him the dream.

“Both the Rebbe Maharash and his wife were too young to have met either the Alter Rebbe or the Mittler Rebbe in their lifetime, so the Tzemach Tzedek asked her to describe them. When she did, the Tzemach Tzedek agreed that yes, this was exactly how they looked. The Tzemach Tzedek then told them to commission the writing of a Sefer Torah, but that it should be done ‘bechashoee’ – quietly, without any fanfare.”

The yungerman paused before sharing what happened next.

“As I exited the Ohel, I thought about this story and wondered about the fact that it had popped into my mind right after a shliach approached me with his own saga about a sefer Torah. Could it be a coincidence?

“As I entered the video room, who do I see? Rabbi Klein, the sofer who has your sefer torah, was standing right there! This definitely couldn’t be a coincidence. I went over to him and verified the story that you told me. I asked him how much you owed, and was impressed that it was $8,000 – exactly the amount you said – you weren’t trying to make even one extra dollar!

“I told Rabbi Klein that I would pay the full amount and that he should please give you your Torah. I ask only one thing: in the story of the Rebbe Rashab’s birth, the Tzemach Tzedek instructed them to do it bechashoee; I want my donation to remain anonymous. You and Rabbi Klein must both agree not to tell anyone who paid for this Torah.”

Thank you to Rabbi Itche Meyer Lipszyc for assisting with the writing of this story.

More from this series:
The Rebbe Answered Before I Even Asked – Rabbi Lazer Lazaroff