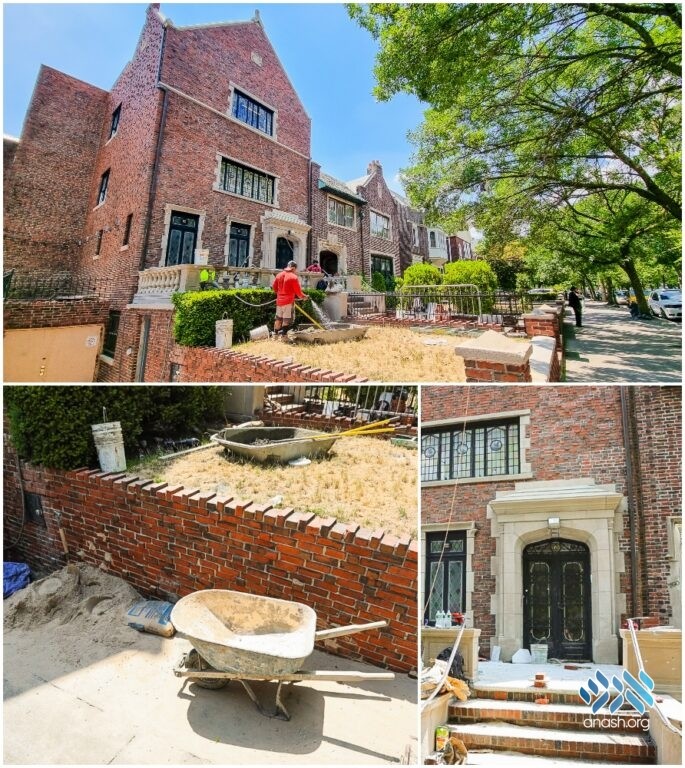 In an ongoing effort to expand and update the Rebbe’s Library, work has begun on retiling the porch and landscaping the front of the building.

In an ongoing effort to expand and update the Rebbe’s Library, work has begun on retiling the porch and landscaping the front of the building.

Ever since the Rebbe’s library was founded in 1941, it has undergone many expansions as the collection grew in leaps in bounds. In 1956 the library was moved to the adjacent building to 770, and an entire floor was dedicated to housing 20,000 books at that time.

The first addition, in 1984, the library’s ground floor and basement were expanded, giving more room on the ground floor for the Rebbe and Rebbetzin’s apartment, and space in the basement for an additional 10,000 books.

Books continued to stream into the library, and in 1987 the need to expand the library was pressing. The new expansion, which took almost 12 years, was enough for all 250,000 books that the library owned in 1999. It also had sufficient space for the books received between 1999-2010.

In 2010, philanthropist R’ Yitzchak Mirilashvili agreed to purchase the neighboring home, 760 Eastern Parkway, for the library, allowing the top floor to be renovated for yet another wing of the library.

As things were settling, a new challenge was presented to the library: Hurricane Ida. In September 2021, Hurricane Ida swept through the Tri-State area, flooding countless homes and businesses, and the library’s lower level flooding as well. Over 5,000 books were damaged by the flood. The books were quickly attended to and restored through an intricate vacuum freeze-drying process.

Just two days later, after receiving the first batch of restored books, the new wing of the Rebbe’s library was completed. 100 new bookcases, with a capacity of approximately 25,000 additional books were installed in addition to a new workspace.

The new renovations continue the work to upgrade the entire facility, preventing any water from leaking in and assuring that the books, seforim, manuscripts and artifacts, many priceless or one-of-a-kind, would be guarded against any potential harm.