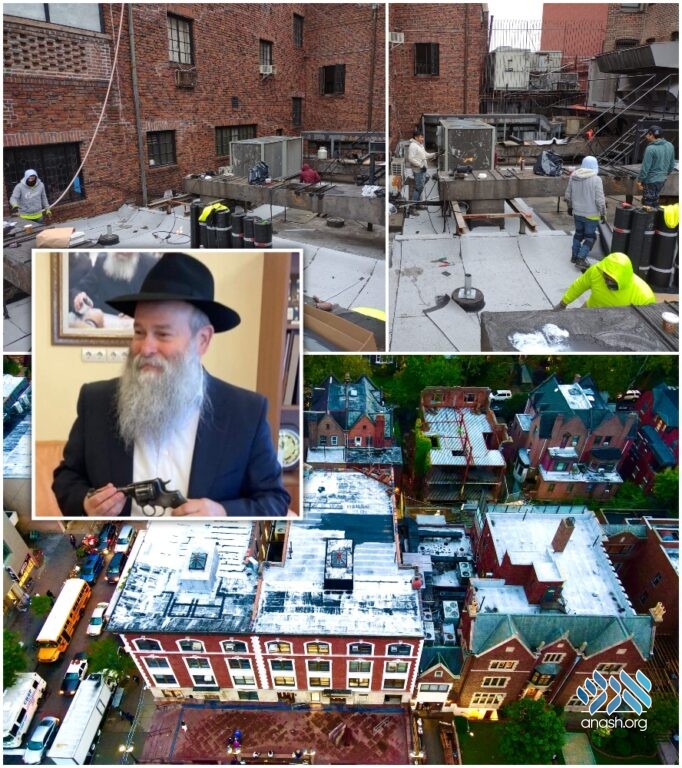 Even as a Russian invasion threatens the stability of the entire Ukraine, the Dnipro Jewish community were busy with something else: sponsoring an extensive repair for the roof of 770 shul, along with a new air condition system.

Even as a Russian invasion threatens the stability of the entire Ukraine, the Dnipro Jewish community were busy with something else: sponsoring an extensive repair for the roof of 770 shul, along with a new air condition system.

The donation, gifted by the Jewish community of Dnipro, Ukraine, headed by Shliach Rabbi Shmuel Kaminezki, was the second series of donations towards a full renovation of the roof of the main shul at 770.

For the past number of years, the main shul at 770 suffered from frequent leaks, occurring after every significant rainfall. During the hours of the storm, and for days afterwards, mispalelim and bochurim would need to sidestep dripping water and puddles on the floor to daven and learn in the shul. After each occurrence, the problematic areas were patched up with the hope of stopping the leaks, but by next time a storm arrived, the leaks would be back in full force.

When the storms were harsher than usual, the effect was felt even stronger in 770, with the shul flooding at times with inches of water, driving home the need for a permanent solution.

The gabboim of 770 sent a letter thanking the Dnipro community “in the name of the tens of thousands of chassidim, Tmimim, and Yidden of all stripes who come to 770 to daven, learn and farbreng; and on behalf of the countless who have been inspired and uplifted by a visit to the Rebbe’s shul,”

The gabboim noted the special status of the community and its unique connection to the shul.

“Dnipro shares a unique connection with 770, being the city where the Rebbe lived during his childhood and his father R’ Levi Yitzchok served as Rov. It is only fitting that the connection be expressed in such a manner, and it is a tangible expression of the care and responsibility felt by the Dnipro community for all Chabad chassidim across the globe,” they wrote.

They also noted that the donation, coming at a time of extreme strain for the country of Ukraine, was especially noteworthy.

“It is truly admirable, that at a time when the eyes of the entire world are focused on Ukraine, the Dnipro community is focused on something else entirely: the upkeep and beautification of the Rebbe’s shul in New York,” they wrote.

In merit of this generous contribution, may G-d Almighty grant you a double portion on benediction in both the physical and spiritual, and may He grant peace and protection to the Jews of Ukraine, among their brethren wherever they may find themselves.