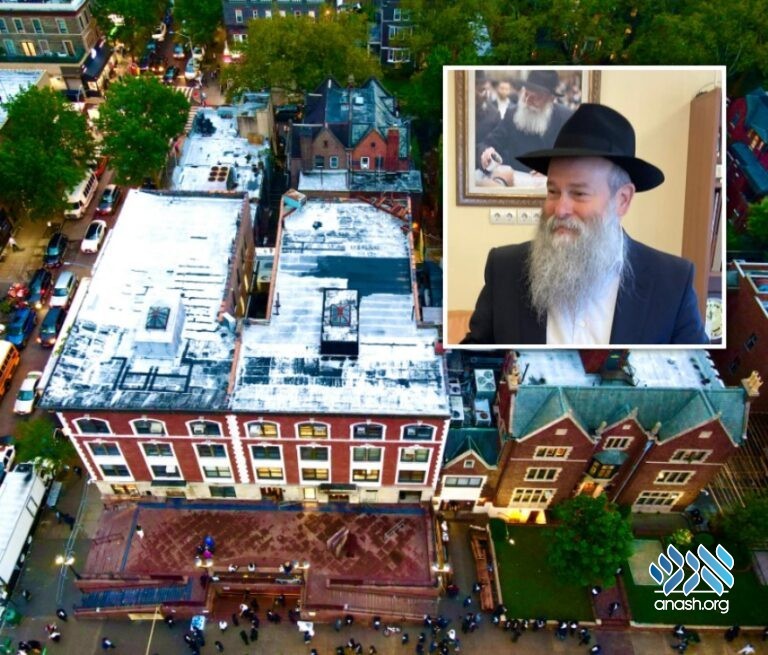 A long-needed repair of the roof above the main shul at Chabad World Headquarters, made more urgent by damage left by Hurricane Ida, will be taking place in the coming weeks. Anash.org has learned that the repair was sponsored by Dnipro Shliach Rabbi Shmuel Kaminetsky.

A long-needed repair of the roof above the main shul at Chabad World Headquarters, made more urgent by recent events, will be taking place in the coming weeks.

For the past number of years, the main shul at 770 suffered from frequent leaks, occurring after every significant rainfall. During the hours of the storm, and for days afterwards, mispalelim and bochurim would need to sidestep dripping water and puddles on the floor to daven and learn in the shul. After each occurrence, the problematic areas were patched up with the hope of stopping the leaks, but by next time a storm arrived, the leaks would be back in full force.

When the storms were harsher than usual, the effect was felt even stronger in 770, with the shul flooding at times with inches of water, driving home the need for a permanent solution.

The arrival of Hurricane Ida in New York only made the situation worse. While the flooding in 770 reached levels that had not been seen before, the real damage occurred on the roof of the building, which also houses the offices of the central Chabad institutions.

Realizing that the problem had to be solved immediately, the gabboyim of the main shul got to work looking for a long term solution. Before long they realized that the only way to solve the issue was to invest in an extensive repair of the building’s roof, which would costs tens of thousands of dollars.

To ensure that the repair would take place without delay, Gabbai Rabbi Zalman Lipsker decided to enlist the help of his nephew, Dnipro Shliach Rabbi Shmuel Kaminetsky. Rabbi Lipsker reached out and asked Rabbi Kaminetsky if he would take upon himself to fund the repair, and the latter quickly gave his approval taking upon himself to sponsor a large portion of the repair, and to raise the remaining funds from local philanthropists.

In appreciation for his assistance, the gabboyim published a full-page ad in the Kfar Chabad Magazine, extolling the praises of Rabbi Kaminestsky and warmly thanking him for helping the shul live up to the proper standard.

With the financial aspect taken care of, the gabboyim set about arranging the practical aspects of the repair, and hope to have it completed for the winter season and the snowfalls that come with it.