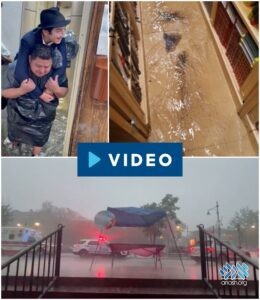 The main shul in 770 Eastern Parkway was flooded on Tuesday as thunderstorms and heavy rain rocked New York and New Jersey.

The main shul in 770 Eastern Parkway was flooded on Tuesday as thunderstorms and heavy rain rocked New York and New Jersey.

The heavy downpour caused significant flooding in the main shul and basement of 770 Eastern Parkway. Located below street level, the entrances quickly filled with water, overwhelming the gutters and quickly flowing inside the shul.

Water also began pouring in from the ceiling in a number of locations, forcing the bochurim who had been studying there to stop learning and relocate to other areas.

The water, flowing in from the front and back entrances, covered almost the entire floor of 770 reaching close to the Aron Kodesh in the front, and covering the floor of the new library in the back.

Almost immediately, the maintenance crew of 770, wearing boots and garbage bags for protection, got to work, clearing the gutters, removing the water, and even carrying bochurim who had gotten stuck in the heavily flooded areas.