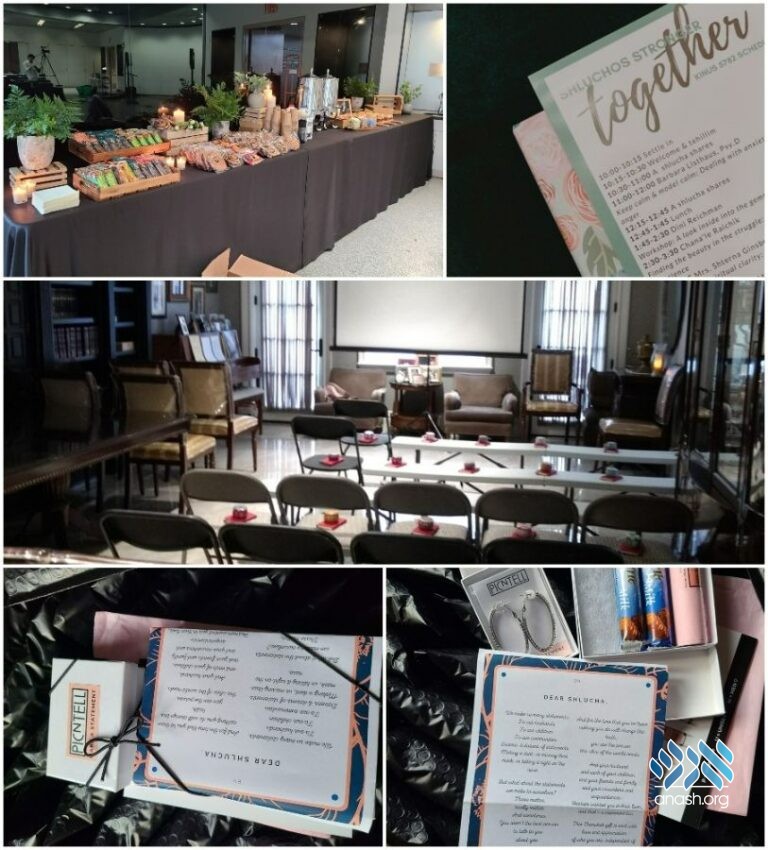 For the People: While battling postpartum depression, Mrs. Musia Baumgarten learned that there is no healing without knowledge and support. She started a virtual community for shluchos with mental illness; today, it’s an official Merkos organization.

For the People is an Anash.org series highlighting grassroots initiatives created by Lubavitchers around the world to benefit the community.

“For those of you who don’t know me, here’s the cliff notes version,” Mrs. Shaina Rosenfeld of Hamilton, Ontario began her address at the 2016 Kinus Hashluchos. “I’m quick to laugh and happy to talk to anyone. People might tell you I’m easygoing and grounded; that’s my public persona. But we’re all multi-faceted, and as real as that persona is, I’m here to talk about what I don’t share.”

Over the next 12 minutes, Rosenfeld spoke about overcoming her resistance to acknowledging and seeking treatment for chronic depression and anxiety. “My story is not one of triumph, but of living,” she said. The end of her speech was greeted with a standing ovation; the audience understood that this act of bravery would help others find the strength to seek help.

Mrs. Musia Baumgarten is no stranger to this courageous brand of vulnerability. After the birth of her first child, she was diagnosed with postpartum depression, a condition people often try to hide. Baumgarten chose a different path. She spoke up, allowing family and friends to rally around her so that with their support, she could heal. When women posted anonymously on large social media groups that they were struggling and didn’t know where to turn, she responded publicly, offering support, guidance and hope.

Several years ago, a family friend asked her to write about her experience in the N’shei Chabad Newsletter. She agreed, not anticipating how hard it would be, and the overwhelming response it would receive. Suddenly, she was the go-to for all things mental health.

“None of this was intentional,” Baumgarten told Anash.org. “There wasn’t this moment where I said, ‘people are so quiet about this, we have to break the stigma, and I’m going to do it.’ It was a progression of events. When people asked me how I was doing, I answered honestly, and I wasn’t afraid to write on the topic in my own name.”

At the Kinus Hashluchos in 2016, the same year that Rosenfeld shared her story, Baumgarten organized a workshop to address the topic. When the session ended, a fellow shlucha asked for help creating a support group. And that’s when Shluchos Stronger Together was born.

It began as a small Facebook group and progressed quickly from there. Every year brought a dozen or so new shluchos to the group, a place where, for the first time, they could share their struggles and receive advice from women who understood. A few years later, a whatsapp group was created for shluchos to turn to when they need immediate support or advice. And each year, there was a session addressing mental health challenges at the kinus.

Shortly before the kinus of 2019, shluchos in the group began to beg for a retreat.

“At the time, I was a one man show with no money,” Baumgarten said. “It wasn’t feasible to arrange a full getaway. But an afternoon of friendship and farbrenging in my parents’ living room? That I could pull off.”

That year, following the final session of the kinus, 11 shluchos gathered in the home of Rabbi Shmuel and Mrs. Tzirl Goldman for a Shluchos Stronger Together mini-retreat. The program included several workshops, dinner and a roundtable support group. Mrs. Rus Devorah Wallen, a respected Chabad counselor, met privately with each shlucha to discuss her situation and point her in the direction of appropriate help.

The following year, 50 shluchos crowded into the Goldmans’ living room for the post-kinus program. By that time, Baumgarten was already in touch with Rabbi Sholly Weiser of Yaldei Hashluchim, who was working to bring Shluchos Stronger Together under the Merkos umbrella. That day, before the workshops began, Rabbi Moshe Kotlarsky came to address the shluchos, a gesture which many of them found encouraging.

In the summer of 2021, with the help of Mrs. Chani Goldberg, Shluchos Stronger Together became an official Merkos organization, with Baumgarten remaining as the head of day-to-day operations. This year, the post-kinus program, which lasted a full day and concluded with a late-night farbrengen, was hosted at the JCM and attended by over 100 shluchos.

In addition to the annual event and the Facebook and WhatsApp support groups, Shluchos Stronger Together organizes webinars throughout the year, sends a Chanukah gift to each participating shlucha, and provides support in whatever areas it can. Baumgarten is often aware of personal circumstances that can exacerbate a shlucha’s emotional stress – a painful loss, a sick child, a challenging postpartum experience – and will send help and encouragement in the form of catered meals and care packages.

“People often call me with suggestions for promoting mental and emotional wellbeing in our community,” Baumgarten said. “Here’s what I want everyone to know: I don’t have a special set of skills or magical abilities. You can do this, too! When you see a need, instead of calling someone else with ideas, be the one to make a change.”

Today, Shluchos Stronger Together has more than 100 members. Many of them have been empowered by the group to share their own situations with family and friends, and some are receiving treatment and support for the first time.

“Everyone needs to know they’re not the only one,” Baumgarten said. “They’re not crazy and it’s not their fault! Sometimes, people tell me that they can’t speak to their family. They say, my mother and mother-in-law would never understand!’ And I wonder, what if you could be the person to help them understand?

“It hurts to know that there are people who are experiencing so much pain, and on top of that, they’re trying to hide it. But there is nothing to be ashamed of. The women in this group are normal, happy, productive shluchos. If you would see us together, nothing would indicate that we are connected by our shared understanding of mental illness.”

One day, Baumgarten hopes, mental illness will be seen for what it is – a chronic medical condition that can be effectively managed with treatment and support. In the meantime, she is content to celebrate with the Shluchos of Stronger Together as they overcome the stigma and reclaim their lives.

To partner with Merkos in supporting Shluchos Stronger Together, click here. For more information about the group and how to join, email [email protected].

Know of an initiative that belongs in this series? Email your suggestion to [email protected].

For the People – Anash.org profiles grassroots initiatives of anash around the world
Talmud La’am: Everyone Can Be a Lamdan
Mothers Offer Comfort and Healing, With Love
How the Smartphone Became My Best Parenting tool