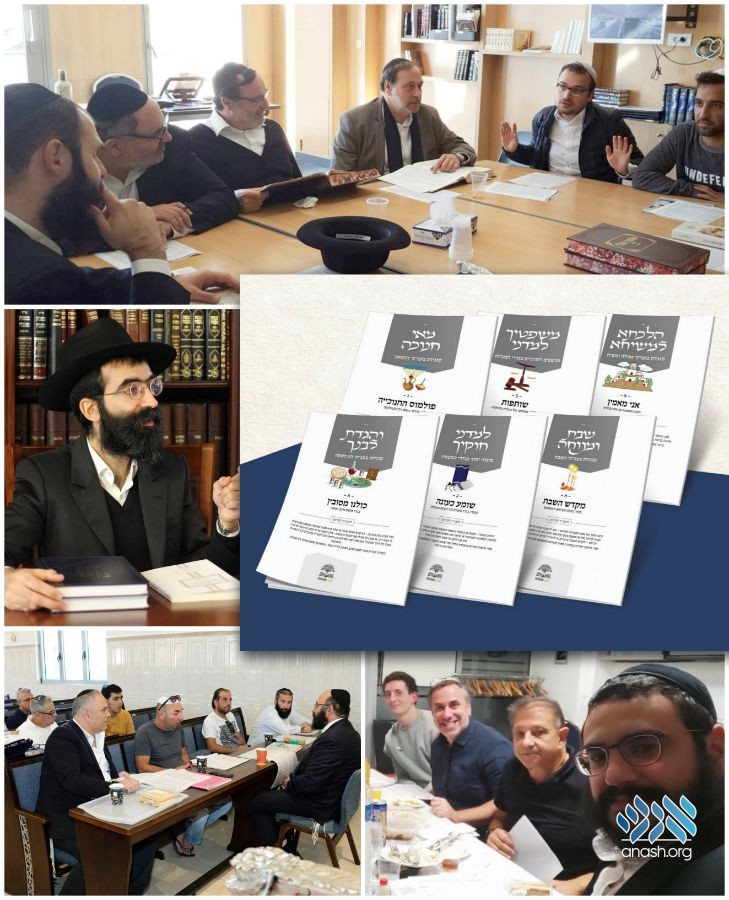 For the People: A new Anash.org series offers a glimpse behind the scenes of initiatives that are changing the way we live, learn, work and heal.

Rabbi Binyomin Bitton of Vancouver, British Columbia wears many hats. He is the spiritual leader of the Downtown Vancouver community and a father to eight beautiful children. He is also a renowned teacher of nigleh and chassidus whose online classes attract thousands of viewers.

A scholar in his own right, Rabbi Bitton is not content to give simple shiurim with basic explanations and stories. He believes his balebatim are capable of rigorous Torah study, and helping them experience this is a cornerstone of his shlichus.

At the outset, however, he met with a challenge that echoed a trend he had observed in his years as a yeshiva teacher. The enthusiasm his talmidim felt when they started out seemed to falter as they progressed to in-depth learning.

‘What happens to the geshmak?’ Rabbi Bitton wondered. He thought back to his own yeshiva days. What had made gemara b’iyun so enjoyable? After some reflection, he arrived at the answer: his rosh yeshiva, Rabbi Yechiel Kalmenson of Brunoy, had a gift for making the lomdus of gemara clear and accessible.

“He used to tell us that the sign of a good shiur is when talmidim say at the end, ‘This is so simple, anyone can master it!’” Rabbi Bitton told Anash.org. “If the students come away saying, ‘wow, that was very deep,’ they may not have fully understood.”

There are many resources available for basic shiurim. But when it comes to the next level – balebatim have been learning with their shliach, perhaps, and now they are looking for a bais medrash style of learning –  there is little out there. Rabbi Bitton set out to fill that gap, and Talmud La’am was born.

A project of the Tzfunot Institute, Talmud La’am is designed to empower teachers who aren’t satisfied with good students. They wish, instead, to create confident learners.

The shiurim are carefully crafted so that the talmid can glean the information for himself. First, the lesson is introduced with something that will grip his curiosity. The essence of the topic is then explained, and he can now delve into the gemara’s reasoning. The shiur ends on an inspirational note, with a practical hora’ah.

Throughout the lesson, the teacher is training the student to learn the gemara and its meforshim on his own. In time, balebatim without a yeshiva background are engaging in serious lomdus!

“The fact that one learns how to learn is unique for an introductory class,” said Mr. Daniel Friedman, an author and scientist who attends classes at Chabad of Richmond, BC. “Students of all backgrounds, often with very little background in Talmud, begin participating right from the beginning – a most valuable approach.

“One is learning how the process works, how the logic works, how the answers are derived, and with every session [he] gets more proficient at applying this process. I was able to give a class myself, something I never expected at this stage.”

“It was a huge challenge to condense it into 15 minutes,” said Mr. Hershler, an artist and college instructor in the field of education. “In the process of preparing, it struck me that Rabbi Bitton has an incredible ability to guide us step by step so that we’re in control of our own learning.

“When I first began learning Talmud, I had had a very minimal Torah education. I had no idea that it would be a possibility for me to give over something in gemara. Rabbi Bitton’s class gave me access to a level of learning that I felt was out of my reach.”

When choosing topics for shiurim, Rabbi Bitton looks for relevance and variety. “Even though we are speaking about gemara, which is reasoning and logic, when we delve into the definition of a mitzvah, we come out with practical ramifications. The shiur on lechem mishna leads into questions like whether you can take challah out of the freezer – something people are doing every Shabbos! This way of learning inspires balebatim to increase their observance of mitzvos.”

There are other considerations – can the Rebbe’s chidushim be brought out through this topic? Will it teach participants principles that can be applied to other subjects? Is this a good avenue for strengthening students’ skills such as analyzing the wording, getting to the essence of a subject, and deriving a nafka mina?

Once a topic is chosen for the series, Rabbi Bitton creates three shiurim. He carefully selects what to include and what to leave out so as not to overload the talmid. It sounds simple, but it involves a great deal of time and thought, and each shiur takes many hours to prepare. Once completed, it is sent to editor Rabbi Dovid Farkash, who makes sure the loshon and ideas are clear and easily understood.

After the editing and design have been perfected, there is one final step: before the course is published, Rabbi Bitton takes it for a test run. He teaches the shiurim locally and looks out for ways they need to be tweaked – maybe the order can be changed, or an idea should be clarified or removed.

The program is fairly new, but there are already a number of shluchim and anash across the United States, Canada, Israel and Europe that have begun utilizing these shiurim. At the suggestion of Rabbi Kalmenson, who praised and encouraged the project, they are even being used in several yeshivos! There are currently eight courses, but this is just the beginning – there are plans to create several each year.

Rabbi Bitton has witnessed it in many settings: when a teacher presents clearly and gives students – whether they are balebatim in a Chabad house, anash yungeleit, or yeshiva bochurim – the opportunity to expand their capabilities, their taste for gemara grows, too.

“You can see it on people’s faces,” Rabbi Bitton said. “As they begin to understand the material and grow in skill, they discover a real geshmak in learning!”

The Tzfunot Institute is currently offering a complimentary series to any anash community who commits to setting up a gemara shiur. For more information on Talmud La’am, reach out to [email protected]