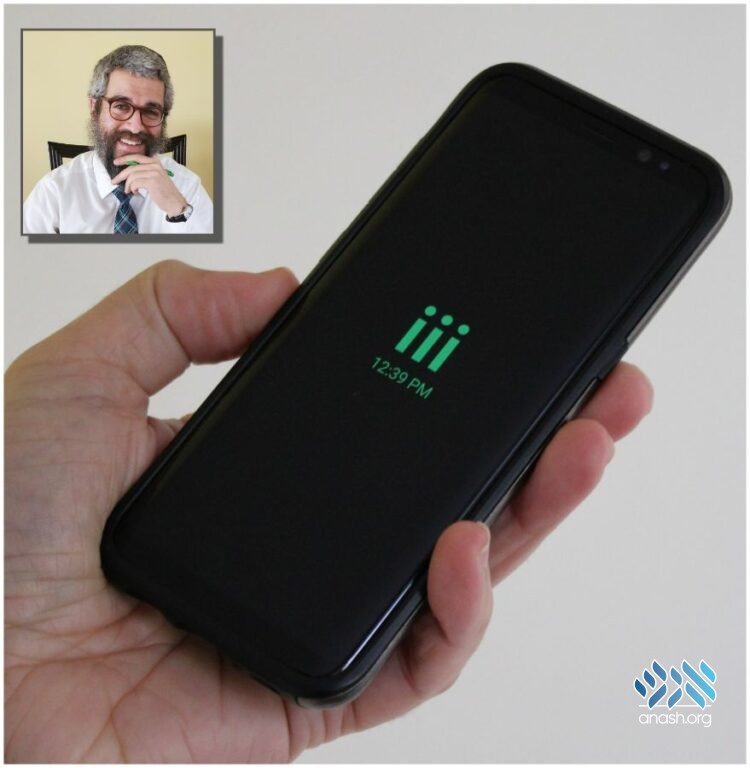 For the People: Rabbi Yossi Marozov, shliach to Pepper Pike, OH believes our most meaningful connections can be created through our devices, not in spite of them. “There’s an APP in hAPPy, and it’s called Present Mode,” he says.

Chana is a busy mother of six who lives far from family and friends. As a full-time teacher, she gets home from school together with her kids. She wants to give them her undivided attention, but it’s hard to ignore the pull of her family whatsapp – the lively conversations all seem to take place between 3 and 6 PM.

It’s also hard to ignore the constant to-do list running through her mind. Remind class parents to send in recyclables for a craft; order new sweaters for the kids; check the weather for the day of Meir’s upshernish.

By the time Chani looks up from her phone, it’s dinner time and she hasn’t even gotten her kids started on their homework. Her 6 year old is tugging at her sleeve and begging for her attention, and she sees the light going out of his eyes as he realizes – yet again – that when Mommy’s on her phone, she’s too busy to answer his questions. Her heart sinks and she wonders how she falls into the same trap over and over.

Rabbi Yossi Marozov of Pepper Pike, OH is no stranger to this sentiment. For years, he believed that his smartphone use was ‘bad’, and that he needed to break the cycle. The device is a powerful tool for his shlichus, and he sensed that if utilized properly, it could enhance his relationships and productivity. But what about the distractions it was creating – could he find a way to bypass the pull of a mindless escape?

Turning off the phone for hours at a time didn’t sit well with him. Rabbi Marozov is often called on to help people in emergency situations, and besides, that idea sounded nice in theory, but the practice was hard to sustain.

One Shabbos, as he was walking home from shul, Rabbi Marozov had an idea. What if there was a way to do it all? What if he could remain reachable, give his undivided attention to his family, and create better habits all at once? What if the phone itself was the key to enhanced relationships? From that flash of inspiration, The Present came to life.

What is The Present?

The Present is an app that pauses all smartphone functions and notifications aside from incoming calls. The user can choose to enable an auto-reply that will inform anyone who sends a message that Present Mode is activated and they can call if the matter is timely. The home screen is turned off, save for the Present logo that lights up.

“The magic is in that glowing logo,” Rabbi Marozov told Anash.org. “The screen becomes a visible signal to our family that they are precious to us, that our time with them is the only thing that matters to us right now. For ourselves, it’s an inspiring reminder of our choice to be fully engaged in the moment.”

Rabbi Marozov says that the app is not about making the best of a non-ideal situation. It’s about harnessing the very temptation as a force for positivity.  “Never has there been a tool that can create bonds between parents and children, between spouses, and between people and Hashem, like the smartphone. Come into my house and see my happy kids. It was not always this way! Each day, when I come home from work and hand my children the phone to put it on Present Mode, it affirms that my delight in their company is more powerful than the pull of the screen.

“The Present is just that: it’s a gift we give to ourselves and our families.”

As the app is used routinely, it builds mental muscle that enables the user to handle the urge to use the smartphone mindlessly. It’s different than putting the phone in another room or powering it down, because when using the Present, the phone itself contributes to these positive results.

Another benefit of using the app is that our children notice our balanced approach to smartphone use.

“We all want our children to develop a healthy relationship with the digital world when they are ready for it. Our primary goal, then, is to model a positive relationship with technology, to show them that it is a powerful tool for connection and a force for good.

“Children resent having values forced upon them that their parents do not live by. If we are not a dugma chaya in our own use of technology, we are sabotaging our cause. When, however, we model a healthy relationship with our own smartphone, our children will come to admire us for it. They may put up fierce resistance to the boundaries, but ultimately, they will accept them with respect and love.”

Rabbi Marozov says he has seen firsthand the profound effect of developing these boundaries. “A short time after I started using the app, I asked my son’s teacher how he is doing. She told me, ‘Lately, your son has become the best listener in the class, and he’s listening with his eyes.’

“I told her about my new practice of spending present time after work and connecting with my children eye to eye. She was amazed at how it had affected my son – he began the year as a somewhat challenging student, and now he was ‘listening with his eyes!’”

Rabbi Marozov advises people to start slowly by using the app consistently for half an hour at the same time each day and building from there. He cautions users against trying to impose the app on anyone else, especially a spouse. “See yourself as a dugma chaya, but let go of the expectation that others will reciprocate. This is a gift you give without expecting in return.”

Rabbi Marozov believes that it is significant that along with the revelation of chassidus came major advancements in technology. He further points out that touch technology was introduced shortly after Gimmel Tammuz, with the release of the Palm Pilot.

“The Rebbe gave us the teachings and tools we need to elevate and transform this technology. In the very first Maamar of Basi Legani, the Rebbe tasks us not only with subjugating the koch of the nefesh hab’hamis, but with transforming it into shtus dekdusha. Could there a better way to transform the challenge of smartphone temptation than using it to connect deeply with our children?”

The Present Mode app now has users in 58 countries! Visit www.PresentMode.com to download the app. Present for iOS in the works; in the meantime, it is available to Android users.