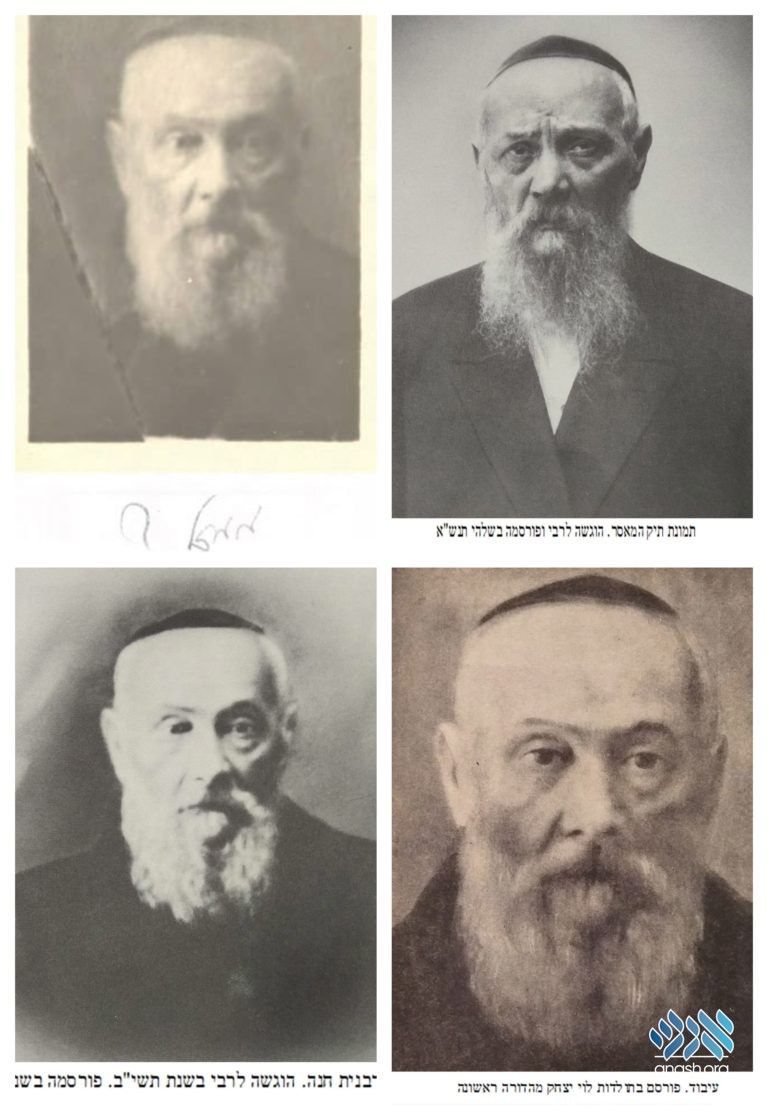 Who brought the picture we have of Rav Levi Yitzchok – the Rebbe’s father – to the Rebbe? Conflicting opinions and unanswered questions.

Was the photo restored by Moshe Groner in 5712/1952 and given to Rebbetzin Chana in the presence of Moshe and Reb Dovid Raskin? Or was it handed to the Rebbe by the mashpia Reb Moshe Vishedski in 5726/1966, after the latter was able to leave the Soviet Union and after a while come to the Rebbe?

On the back of which photo did the Rebbe write “אאז”ל?!” – meaning: is this my father?!

If Rebbetzin Chana was already in possession of the photo in 5712/1952, why then when her niece, the poet Zelda Mishkovsky (Schneersohn) – daughter of Rav Levi Yitzchok’s brother Reb Sholom Shlomo – asked for a photo of her late uncle did Rebbetzin Chana tell her that she had none?

These and other questions were addressed to me lately.

After I published the biography of Reb Moshe Vitebsker (Vishedsky), where I wrote about the photo and how it was brought to the Rebbe by Reb Moshe, I published a short response to these questions around Chof Av of this year, but the follow-up questions kept on coming, and the mystery just continued to grow. On Whatsapp, the questions just continued; people had answers but in the end, it seemed like there were two versions to the story of how the photo reached the Rebbe.

While conducting my research, I came to Rabbi Chaim Shaul Bruk of Lahak, the man who pursuant to the Rebbe’s hora’ah, printed the photos in 5751/1991. Here, in short, is what he told me. In addition to his responses additional research was done, so here are my findings:

Hagaon Hamekubal Rav Levi Yitzchok Zt”l was arrested in Nisan of 5699/1939 and exiled to Kazakhstan. Rebbetzin Chana joined him there, but most of their belongings – including family photos – stayed behind in Dnepropetrovsk. Two years later the Nazis entered Dnepr and destroyed all of their belongings. For decades after that, there was no picture of the Rebbe’s father.

The first photo that arrived to the Rebbe was the one from Rebbetzin Chana. This is what Rabbi Chaim Shaul Bruk heard directly from Moshe Groner, a”h, who was directly involved in the restoration of the photo:

In 5712/1952, Rebbetzin Chana showed Reb Dovid Raskin, a”h, who remembered her husband from Alma Ata, the photo she had of Rav Levi Yitzchok. Where she got the photo from is unknown. The photo was likely taken in Chiali, Kazakhstan, and was torn, so that only half of his face was visible. Rebbetzin Chana asked that the photo be restored, which is how it ended up in Moshe Groner’s hands. The photo was restored and several copies made and distributed.

When the Rebbe was presented with one such copy in the presence of Rebbetzin Chana, he asked: “ver iz dos?” (who is this?), implying that he doesn’t recognize his father after the years of exile and pain.

There is no picture

In 5713/1953, when Zelda Mishkovsky asked for a picture of her uncle, Rebbetzin Chana responded that she has none. So too, in later years, in her memoirs, the Rebbetzin writes that she has no photo with which to remember her late husband. We can assume that in her eyes, this restored photo wasn’t considered authentic or real.

The second photo arrived to the Rebbe in 5726/1966. The mashpia Reb Moshe Vishedski brought the Rebbe a photo of Rav Levi Yitzchok from his time in golus. The photo is similar – or identical – to the one from 14 years prior, so it may be the same actual photo or it may be taken at the same time and was very similar. Reb Moshe got it from Reb Hirshel Rabinovitch, who had been very close to Rav Levi Yitzchok and helped the family during those difficult times in Kazakhstan. Reb Hirshel had later lived with the Vishedskis in the same town, Chernovitz.

In her memoirs, Rebbetzin Chana writes that she had in her possession a photo of her husband from his golus days, but that she shad been afraid to take the photo of her husband with her on the way out of Russia in 5707/1947, fearing that authorities would recognize him and connect her to him. She also was not willing that the Rebbe see it and see how his father had suffered.

Rebbetzin Chana did not write in her memoirs what she did with the photo; we can maybe assume that she handed the photo over to Reb Hirshel for safekeeping and that he was the one who gave it to Reb Moshe Vishedski when the latter was allowed to leave the Soviet Union, so that he hand it to the Rebbe when he arrives at 770.

Reb Benzion Vishedski, Reb Moshe’s son, recounts that on that photo the Rebbe wrote “אאז”ל?”,”meaning that the pain and suffering is quite evident on Rav Levi Yitzchok’s face, but he’s most definitely the one in the photo – there was no question abut that.

In 5730/1970, in preparation of the publishing of the first volume of Likuttei Levi Yitzchok, the torah of Rav Levi Yitzchok, the Rebbe asked mazkir Rabbi Leibel Groner to publish the photo in the sefer. Rabbi Groner asked the Rebbe where to find the picture, to which the responded: “your brother Moshe has it, get it from him.” “There is another copy of that photo at my house,” the Rebbe added, “but there’s no time to look for it.” Moshe gave the photo to his brother to be published and Rabbi Groner returned it to his brother.

In subsequent years the Toldos Levi Yitzchok biography was published with Rav Levi Yitzchok’s photo at the beginning of the book. One can easily discern that the photo had undergone more professional restoration since the original photo was first publicized in Likuttei Levi Yitzchok.

The third photo was delivered to the Rebbe in 5751/1991. This was the photo that was part of the interrogation file of Rav Levi Yitzchok in 5699/1939. The photo came to the Rebbe in different sizes, and on of those photos the Rebbe inscribed the word “אאז”ל” – without the question mark this time. The photo was restored, with the Rebbe’s permission, in time for the publishing of the new sefer Toras Menachem – Tiferes Levi Yitzchok that was published in honor of Vov Tishrei, 5752. The original photo of Rav Levi Yitchok was also published then. Here too, Rabbi Bruk got the original 5712/1952 photo from Moshe Groner and then returned it. Rabbi Bruk once again heard the story of how he restored the original photo from Rebbetzin Chana in 5712/1952. from Moshe Groner at that time.

In 5756/1996, during the 4th exhibition of the Aguch Library, the photo of Rav Levi Yitzchok, the photo that the Rebbe had written the word “אאז”ל?!” was part of the exhibition, and it seemed b’pashtus that this was the Vishedski photo. All of those involved in the 5712/1952 photo attest that the Rebbe never made inscriptions on that photo. Rabbi Berel Levin, librarian of the library, and the one in charge of the exhibition agrees with that notion, despite not being part of the 5712/1952 event.

After making a “seder” of the photos, the following questions remain unanswered:

Why did the Rebbe ask that the Rebbetzin Chana version be the one published, and not the Vishedski version, the one that arrived almost fully intact? We don’t know the Rebbe’s reasons, but we can assume that either it wasn’t easy to find, or that the Rebbe preferred to honor his mother after her passing by publicizing the photo that she made sure to restore.

Anybody having additional information can e-mail Zalman Berger at [email protected] or call or WhatsApp him at 011-972-58-7700698.