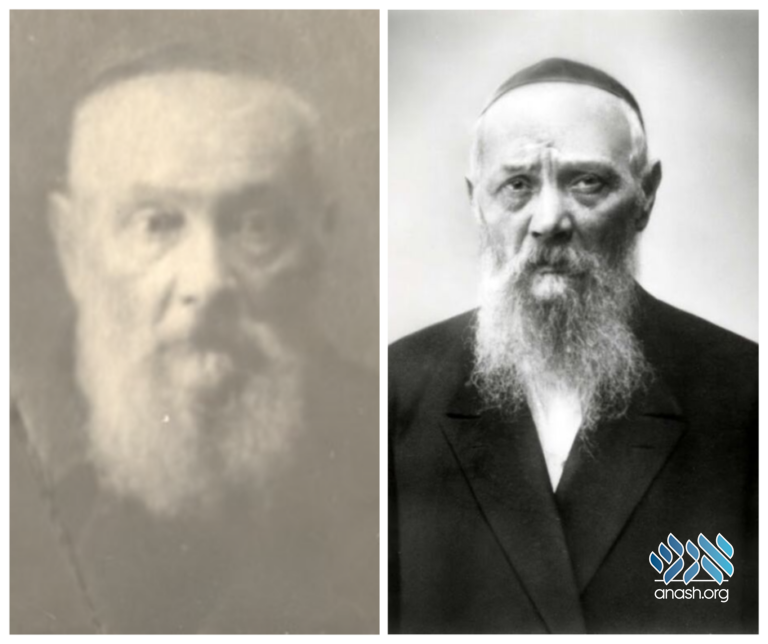 The Story of the two extant photographs we have of the Rebbe’s father, Rav Levi Yitzchok, who’s yahrtzeit we will be commemorating a week from today.

In the year 5712, the Rebbe’s mother, Rebbetzin Chana, once summoned Reb Dovid Raskin and requested a favor: she had in her possession an unclear photograph of her late husband, and she wished to clean it up a bit. Reb Dovid responded that Reb Moshe Groner dealt with photographs and would possibly be able to assist her.

The next day, Reb Dovid and Reb Moshe arrived at her apartment. The Rebbetzin showed them the picture that she had; it only contained half a face (it was torn down the middle), and was full of cracks and smudges. She asked Reb Moshe if he would be able to make anything of it, to which he responded that he knew of a studio in Manhattan where the photo could be properly completed.

The Rebbetzin thanked him, adding that this was the only photo she had, so he ought to be careful with it, and try to do as best a job he could.

Two weeks later, Reb Moshe returned with the altered photograph. The Rebbetzin pointed out a few corrections and Reb Moshe had them inserted. Seeing the photo again, the Rebbetzin added a few more corrections, and only upon Reb Moshe’s third return was she satisfied, and said, “This is how he looked two weeks before he passed away”.

She then requested of Reb Moshe to produce four copies of the photo; one for herself, another for her son – the Rebbe, another for Reb Moshe himself, and one more for Reb Dovid.

During the Rebbe’s next visit in his mother’s home, Reb Moshe and Reb Dovid stood nearby in hiding. When the Rebbetzin handed the photograph to the Rebbe, he asked her, “Who is this?” and she replied, “This is your father!”

Seeing how different his father’s appearance had become after enduring the hardships of exile, the Rebbe began to tremble in disbelief and placed the picture face-down on top of a nearby dresser.

Years later, in 5730, when Kehos printed the first volume of Lekutei Levi Yitzchok, the Rebbe wished to have the picture appear at the beginning of the Sefer. When the Mazkir, Rabbi Groner asked the Rebbe where they would obtain a copy of it, the Rebbe responded that he had one at home, but he wouldn’t have time to locate it now. “T believe your brother Moshe has one as well”, the Rebbe said. “You can get it from him.” Reb Moshe brought his copy of the picture to the  Rebbe and it remained on the Rebbe’s desk for one night, after which the Rebbe gave it over to be used for the printing of the Sefer.

In 5751, after the fall of the Communist Regime of the USSR, many new files containing documents pertaining to Lubavitch became accessible, among them also the file regarding the arrest of the Rebbe’s father, Rav Levi Yitzchok. It was there that a new photograph was found as well, taken shortly after his arrest when he looked much younger and in better health.

Although in the newly found photograph Rav Levi Yitzchak undoubtedly looked better than in the picture that was available until then, Kehos refrained from publishing it, due to some minor flaws.

When the members of Vaad Hanochos B’LaHak prepared to publish the second volume of “Toras  Menachem – Tiferes Levi Yitzchok” (a compilation of the Rebbe’s Sichos explaining his father’s Ha’oros on Zohar), it was decided that the newly found picture should be placed at the beginning of the Sefer.

They located a professional artist in Manhattan who would be able to fix the photo and prepare it for publishing, and they hoped that the Rebbe would agree with their idea.

After they collected the ready picture, they sent it into the Rebbe with the Mazkir, Rabbi Krinsky, along with a letter explaining their idea and asking the Rebbe’s permission to go ahead with it.

When the Rebbe saw the restored photo, he asked Rabbi Krinsky “Can this remain with me?” Rabbi Krinsky explained that they needed to have the photo back for printing (to obtain one copy of the photo cost an immense amount of money). The Rebbe responded, “Can it stay with meat least over-night?”

The next day, the Rebbe went to the Ohel. While in the car on the way, the Rebbe wrote a response to the letter of the members of LaHak. The Rebbe suggested that they publish both photographs, and point out that one was taken before Rav Levi Yitzchok suffered in his years-long exile, and the other was taken afterward, which can give us a bit of understanding as to what he had undergone.

Indeed, that is what was done and in the introduction to the Sefer, they wrote:

At this time, we are publishing for the first time a photograph of Rav Levi Yitzchok depicting his holy face at the time when he was taken to prison (in Nissan of 5699), before enduring the terrible suffering of prison and exile for a lengthy period of time, which weakened and deteriorated his health (to the point that he passed away in exile). This is apparent by noticing the difference between this photograph and the already published one, taken while he was in exile in Chili, where his face is hardly recognizable.

Observing the difference between these two pictures helps us appreciate the true greatness of Rav Levi Yitzchok: even while in exile in Chili, pained under the worst of conditions, his genius wellsprings of wisdom flowed nonetheless, which he jotted down on the margins of the Seforim which he had with him at the time, eventually being published in the set of “Lekutei Levi Yitzchok.”