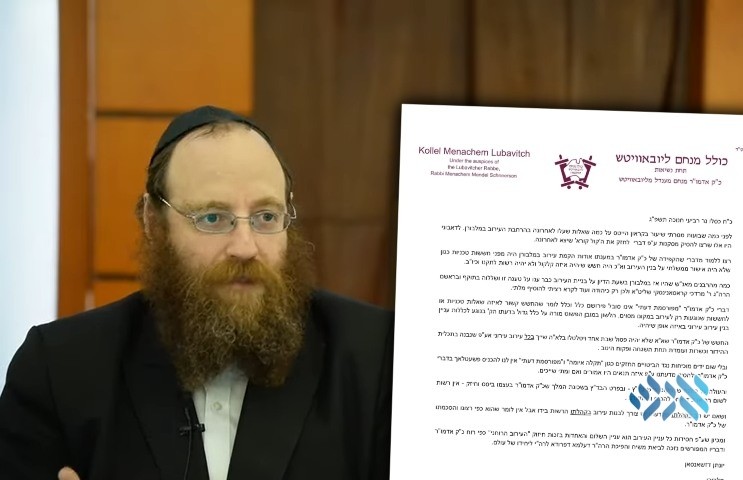 In a public letter, Rabbi Yonason Johnson, Rosh Kolel of Melbourne, responds to rumors circulated about him and lays out the Rebbe’s unequivocal stance on the subject.

After delivering a shiur in Crown Heights on the general topic of eruvin, individuals spread a claim that the Melbourne Rosh Kolel Rabbi Yonason Johnson supports the “Brooklyn Eruv.”

In his letter, Rabbi Johnson specifies that the claim that he supports the eruv is fabricated and that the Rebbe’s words can only be understood one way: against the construction of an eruv.

The following is an excerpt from his letter:

“A few weeks ago, I gave a shiur in Crown Heights about questions that have recently arisen during the expansion of the Melbourne eruv. Sadly, there were those who wanted to draw conclusions from my words to strengthen the eruv letter that came out recently.

“They wanted to learn from my words that the Rebbe’s concern in his response about the establishment of eruv in Melbourne was due to technical concerns such as the lack of government approval for the eruv building, leading to a concern that there may be some sort of damage and there would be no permission to repair it, and the like.

“A number of rabbonim of Anash who were in Melbourne at the time of the discussion on the construction of the Eruv – most notably Rabbi Mottel Krasniansky – have already answered this claim and denied it vehemently. I would like to just add my own thoughts to theirs.

“The Rebbe’s words “my position is well known” cannot be interpreted at all to mean that the concern is related to some technical questions or to concerns that only apply to a specific eruv. The language in the simple sense dictates a general rule in Rebbe’s opinion regarding city eruvin in whichever manner.

“The Rebbe’s concern that it’s impossible that it won’t be possul one Shabbos and people will carry regardless applies to every city eruv, even if built with the utmost hiddur and kashrus and is under a close supervision.

“Without any clear indication against the Rebbe’s strong expressions such as “dreadful hazard” and “my position is well known” we cannot insert pshetlach into the Rebbe’s words and draw our own conclusions about under which conditions they were said, and if and when they should apply.

“Most significantly, wherever there is a Beis Din – especially the Crown Heights Beis Din which the Rebbe himself established and strengthened – no other rov or Beis Din has the authority to intervene.

“If there’s a rov in his own community who thinks that it’s necessary to build an eruv in his community he may do so, but he can’t say that it fits with Rebbe’s will and consent.”