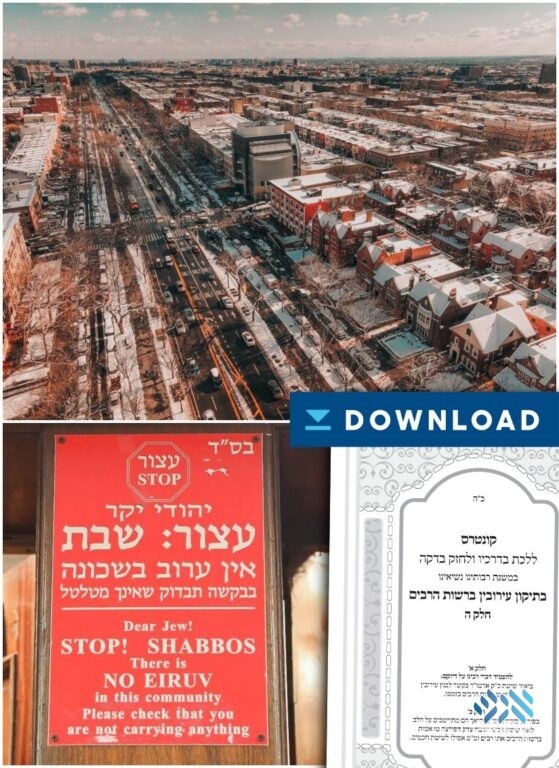 A new publication by Rabbi Shmuel Zajac outlines in detail the Rebbe’s position regarding city eruvin and refutes the argument that the Rebbe was not concerned for reshus horabim in our cities.

For decades, the practice of anash in Crown Heights, which was upheld by the rabbonim there, was not to construct an eruv there, and anash around the world knew that the Rebbe was not supportive of constructing eruvin in cities. This was verified by multiple firsthand accounts, as well as written responses.

Some weeks ago, a new landmark response from the Rebbe was released specifying the Rebbe’s opinion on city eruvin. In that response, the Rebbe expressed his displeasure with eruvin in cities, out of concern that people would carry when the eruv is down. More significantly, the Rebbe spelled out that there are reshus horabim today in large cities, and that a string and pole eruv would not be kosher.

Following its publication, some have tried to reinterpret the Rebbe’s response to allow eruvin. To most who are unfamiliar with the sugya, it can be confusing.

To this end, Rabbi Shmuel Zajac, published a new booklet to clarify the matter and clear up some misconceptions. Rabbi Zajac is a well-known talmid chochom, Maggid Shiur in the Morristown yeshiva, and an expert on eruvin, especially the Rebbeim’s opinions.

Unlike his previous booklets which were primarily geared to talmidei chachomim, this essay is written in a clear and easy style that anyone can follow. The arguments to reinterpret the Rebbe’s words are refuted one by one, and a clear presentation is given of the Rebbe’s stance.

For those unable to read the full essay, there is a summary of the key points at the beginning of the booklet.