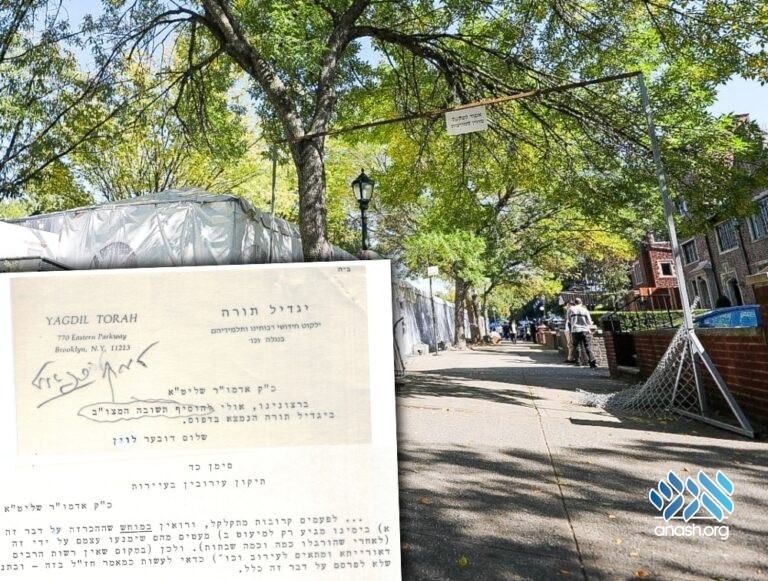 A never-before-published response from forty years ago, released now by Rabbi Shalom Ber Levine of the Rebbe’s library, clarifies the Rebbe’s basic requirements for building a city eruv.

A never-before-published response from forty years ago, released now by Rabbi Shalom Ber Levine of the Rebbe’s library, clarifies the Rebbe‘s requirements for a city eruv.

As is known, the Rebbe had a strong stance on the installation of eruvin in large cities. Aside from the halachic impossibility of making a string eruv in a city with 600,000 people (reshus harabim), the Rebbe had multiple concerns about the issues that a city eruv can bring. This new maineh, clarifies some of those concerns and spell out the Rebbe’s two basic requirements for an eruv: (a) that it is not a reshus harabim and (b) that the place is deemed appropriate for an eruv.

In a conversation with Anash.org, Rabbi Levine explained the context of the response.

“In my work on the Yagdil Torah journal,” Rabbi Levine shared, “I had collected various halachic writings by the Rebbe to include in the publication. Before each publication, I would submit my suggested submissions to the Rebbe for approval.

“In 5742 (1982), I submitted a response that the Rebbe had written on the requirements for eruv in a city, delineating that it not be a reshus harabim and that the place be suitable. Obviously, the Rebbe recognized that there are in fact reshus harabim nowadays and felt the need to specify that as an issue that must be avoided.

“Even when those conditions were met, the Rebbe expressed concern that people would continue carrying when the eruv is broken, and therefore allowed it to be built only in complete secrecy.

“When I submitted this piece to the Rebbe, the Rebbe acknowledged it, but wrote not to include it in the Torah journal.”

The following is a translation of the Rebbe’s halachic response:

“Oftentimes the eruv breaks, and we see clearly that an announcement about this (a) nowadays only reaches a minority of the community (b) few of those will abstain from carrying because of this (after having gotten used to carrying for many Shabbosos). Therefore (in a place where there is no reshus harabim and it is suitable for an eruv etc.) it is worthwhile to build one as Chazal say – on condition not to publicize this at all.”