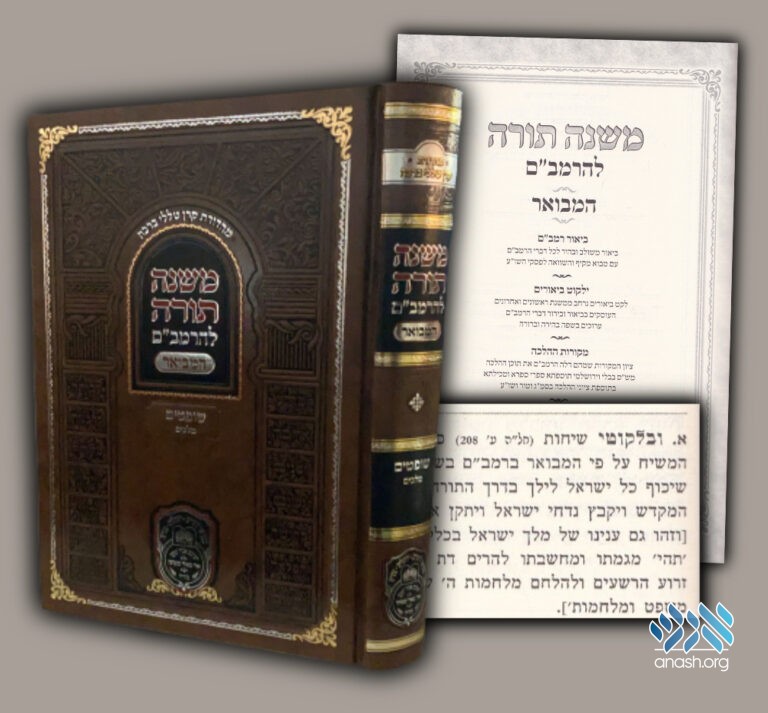 Chabad chassidim who purchased the newest volume of Rambam Hamevuar published by Oz Vehadar were pleasantly surprised to see the Rebbe quoted tens of times, a welcome change from the past.

Chabad chassidim who purchased the newest volume of Rambam Hamevuar published by Oz Vehadar were pleasantly surprised to see the Rebbe quoted tens of times, a welcome change from the publisher’s previous policies.

As with many of their recent publications, the new set is being published in conjunction with the Ohr Layesharim institute. At the helm of Ohr Leyesharim stands Rabbi David Chai Abuhatzeira, a grandson of the Baba Sali, and son of the Baba Meir, both who had close connections with the Rebbe.

Since the start of Ohr Leyesharim’s partnership with Oz Vehadar, a notable change has been taking place in the latter’s publications. Whereas until that point, a mention of the Rebbe’s Torah was a rare sight in an Oz Vehadar publication, from when the two partnered, almost every sefer produced has numerous quotes and references from Chabad Chassidus in general, and the Rebbe’s works in particular.

Nonetheless, the newest sefer, which contains explanations on the final section of the Rambam – Hilchos Melachim Umilchamoseihem – goes beyond even that. The editors drew extensively on the many explanations of the Rebbe, quoting Likkutei Sichos and other works of the Rebbe hundreds of times throughout the sefer.

In a conversation with Anash.org, Mendel Ezagui, who produced a full sefer of the Rebbe’s explanations just on the final two perokim of the Rambam, said he was pleasantly surprised when he saw the new sefer.

“At first I was disappointed that Oz Vehadar had published the sefer before I had a chance to send them my ‘Dvar Malchus’, which showcases hundreds of pages of the Rebbe’s explanations,” he said. “But then, when I started reading the sefer, I saw that the Rebbe is quoted in nearly every halacha!”

“Besides for the explanations on the Rambam’s words, the yalkut biurim section also quotes the Rebbe time after time,” he said. “The editors also quoted from a wide range of the Rebbe’s Torah, from Likkutei Sichos, Sichos Kodesh, and other seforim.”

The new trend is not limited to Oz Vehadar. In a book published just this year by Artscroll, a full-page spread featured the Ohel of the Rebbe and Frierdiker Rebbe in a recent book. Other prominent publishing houses have taken to quoting the Rebbe openly and frequently as well.