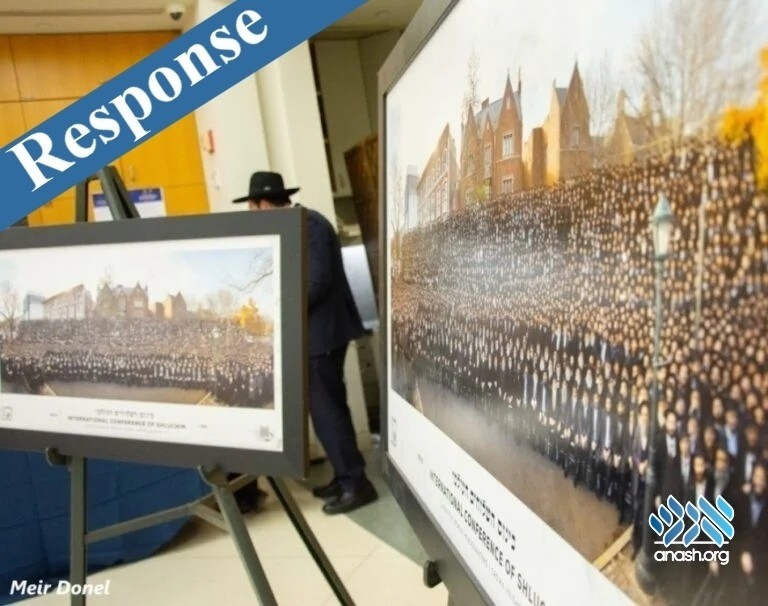 Over the past weeks, two Anash.org articles about shlichus captured the attention of Chassidim around the world. A third opinion piece argues that neither column truly got “the point”.

Over the past few weeks, the discussion in the streets seemed to all be about two articles on Anash.org: The op-ed by Rabbi Gershon Avtzon (Should We Rethink The Way We Talk About Shlichus?) and the response by Rabbi Shimon Posner (Perhaps The Dissatisfaction Is The Point?).

To me, they both seem to be dealing with a much more general age-old question: Is it good to have expectations of yourself?

“The key to happiness is low expectations”, and seeing the disappointment of those who have not fulfilled their expectations, argues the first op-ed (as I understood it), “maybe it’s time to lower ours.”

The response argues: “Why lower our expectations, better to increase the urgency.”

I don’t know which one is right. Neither is my English as rich as Rabbi Posner’s.

But let me suggest a third approach:

Lubavitch is not a derech, as much as it is a nekudah (a point; an aim). A derech takes you in one direction, a nekudah faces different directions at once1.

If you start from the nekudah and only take one path, you may reach the destination of that path, but you have plucked it away from its (source, and multi-faced) nekudah. Eventually, that path will dry up.

One path: The Rebbe has a goal, a mission, and we are his soldiers. The Rebbe’s chinuch is mesiras nefesh and “who said we are meant to be comfortable.” If you travel on shlichus the Rebbe is proud of you, and if not, you missed the train, and “the least you can do about it is feel anguished…”

“The fire is burning, and we won’t lower our ‘expectations’ until Moshiach comes,” they continue.

I would venture to say that even if someone takes solely this approach (to the extreme) and succeeds, then even while on shlichus, he will not feel happy inside and always feel like he isn’t good enough… (“But it is good to feel that way,” they proudly argue, while pulling out 7 different volumes of Sichos Kodesh to prove their point).

As the dust settles, ultimately, such a conscience will manifest in friction with others and a need to look and put down the “lower class,” since they look down at themselves. This is a trend which is merachek and gives a bitter taste to the idea of shlichus.

(Please note: this is (as stated above) an extreme and obviously not the norm ch”v, but we can all relate to an extent. Just look inside yourself, even as you’re reading this, a part of your brain is subconsciously looking for a subtle flaw in what I’m writing, thereby proclaiming yourself a nuanced thinker…)

Second path: “It’s all nice and fine, just lower the volume, please. The train has boarded and filled, and you’re lucky if you get a back seat.”

“Every Yid is a shliach.” is the banner they carry with pride. (Ironically, that is a term heard always heard around the Kinnus, and less so on a random Tuesday afternoon). “Shlichus is a mindset,” they tell you with an enlightened twinkle in their eye (as if that’s less demanding than the practical term of shlichus). And “unreasonable expectations are not good for your mental health.”

Is there a third? Is there a core point (nekudah) that can bring out how the view of both Rabbis Avtzon and Posner work hand in hand, without the compromise of the first or the heartache of the second?

Imagine a mother telling her child: “You’re a good boy, but it’s really a tough world out there, and I just don’t know if you’ll make it. Well, thankfully there’s an extra room in our basement, so let’s get a bunk bed, and you’ll move in here with your wife…”

Or, imagine a mother telling her child “It’s a tough world but you’re tougher. And lest you think you can just opt out and not live up to our prestigious family name, you should know, you’ll always be second to the best.”

Both should make you shudder.

Expectations coming from a void, from needing to prove yourself to others or yourself, is just a tormented ego mapping its own destruction. It will leave you feeling either dented (when lost) or swollen (when achieved) and forever awkward and out of place with yourself and others.

But if coming from where you are already3, it leaves no room for heartache, guilt or inferiority. It’s all an expression of where you were before you even started. If you failed the first time, just reboot and start over.

Ultimately, you know you are in the right place. And there is no lack of confidence when claiming what is yours4 already.

In such contexts, lowering the bar is just a symbol of dishonesty and lack of confidence in what you have to offer.

So too in chinuch. A teacher is one who can honestly tell his student “I see you are a shliach even if you don’t travel on shlichus, but that’s why I know that (one day) you will.” If he can’t say that, then even when he sees a shliach, he is just looking at a costume. No wonder then, that his message will sound either diluted or brutal.

The Rebbe taught us how to approach a fellow Yid. “You’re a Yid and a perfect one. No matter what. And that’s exactly why you should put on Tefillin.”

It’s time we apply this method to ourselves…