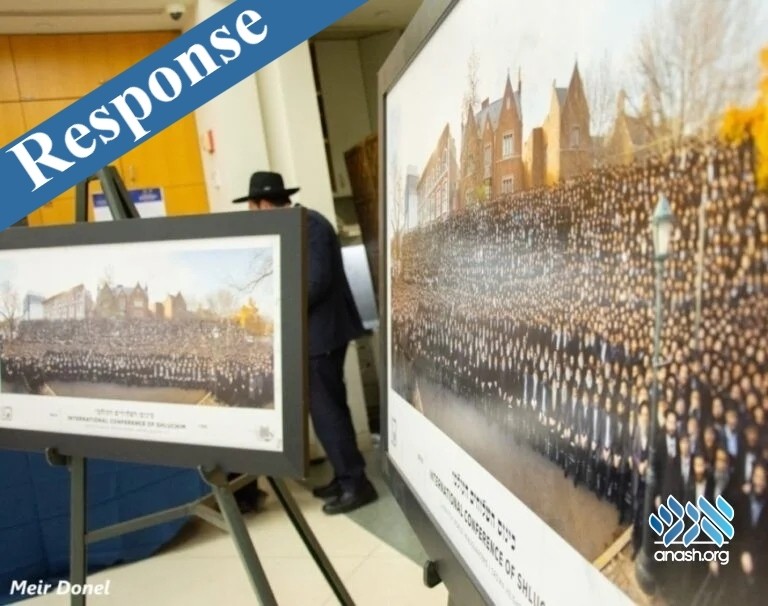 Rabbi Shimon Posner responds to Rabbi Gershon Avtzon’s oped ‘Should We Rethink The Way We Talk About Shlichus?: “The message is the same for those longing for shlichus and those smugly, naively, ensconced in it.  Who said we were meant to be comfortable?”

So the often-voiced question of surplus yungerleit for shlichus positions has been confined to print and bearing in mind my mother’s admonition “if you don’t say something, people can think you’re agreeing with them” I gingerly approach a topic where angels tread lightly.

When I entered Kollel, shortly after our wedding, there was a guy on his way out of Kollel who went through every city on the map and showed conclusively that there are no places left to go on shlichus so he ended up pursuing other interests.  That was in 1988.

He wasn’t wrong, technically.  All of the cities with a Jewish population to speak of were accounted for.  How was he to know and glasnost/perestroika (haven’t heard those words lately) were already clandestinely well under way and within months shluchim would be clandestinely on the way over.

How was he to know that the Far East was to be fertile, untapped ground for a heretofore untapped market of post-army Israeli backpackers?  How was he to know that there was this new technology where people sit at their desks and “kinda-like send faxes to each other, but it’s not really like faxes”?  Yossi Kazen AH would meet me outside 770 Friday nights with printouts of conversations he’d be having with people all over the world.  It seemed interesting that there were so many like-minded geeks, but I totally missed recognizing the advent of the internet and Chabad.org? How was I to know?

This guy, leaving Kollel at a time he believed that new places of shichus was over, was not wrong — technically. The oft-told quote that probably was never said has the Commissioner of US patents ready to close the office because “there is nothing left to invent”. That was (supposedly) in 1899.  The point is, that opportunity is always there for those who follow it, be it in the markets, medicine or…shlichus.

I can say (with reservation) that their energy, their disappointment, poignantly reminds me that what I am doing is important.

Then there are those who think that shlichus is a birthright, akin to joining the family business. I’ve met a fair number of men who entered their family businesses. Some think they are going to “take it to the next level” without having any clue what the foundation was or even that there was one. Some get braggadocios and others depressed (related conditions) at realizing that they won’t be replicating their dad, whom they either adore or despise. In extreme cases they commit suicide.

Their mistake is simple and often overlooked. The market is constantly shifting and new talent and new means are constantly affecting your products and services. You never inherit a business as much as, by way of inheritance, you get a foot in the door. Whether they know it or not, if they think that arrival is designated by birth rather than by achievement, the market will overtake and replace them in quick order. And if this is true in the market, how much more so in the marketplace of ideas? How much more so on shlichus.

What is shlichus? Today’s parsha gives us good insight in G-d’s narrative of Avraham “Ki Ye’daytiv, for I have known him that he commands his sons and his household after him, that they should keep the way of the L_rd to perform righteousness and justice.” It is a home imbued with the intimacy evoked in the word yidaytiv, where chassidishe nigunim prevail, a home that exudes a quest for menschlichkeit.  These are not inherited, these are developed, percolated through the ups and downs of life by a resolve to integrity.

I do not know why these yungerleit have to suffer so. It evokes the image of the chosid who was told he must be a baal agolah because in some far off kretchmeh awaits a soul that he must touch with his anguished krias shema.

My Zaide Sholom (Posner) was a shliach in Pittsburgh (I’m not sure if the title shliach existed at that time).  He succeeded in changing the face of the city.  He became affectionately recognized as the Z’kan, the elder of the Shluchim.  He arrived in Pittsburgh when he was over forty.

The message is the same for those longing for shlichus and those smugly, naively, ensconced in it.  Who said we were met to be comfortable? Who said we were to be content in our lives and arrived in our station? Is not the fire in the belly preferred?  Not simply because this the market rewards and complacency it denies, Is not anguish, the what I would want it be, rather than the what is, hallmark of chassidus? The preference of our gehinnom to the gan-eden of the unschooled? Are we not suffering from the addiction of the comfort zone, junkies of serenity?

Yes, these things are all brochos, but is not a bracha an inherent challenge?

Rabbi Hadakov once called my father late at night, if I’m not mistaken he woke him up.  Reb Zalman, do you have a Jewish school in Nashville.  Yes, my father answered.  Reb Zalman, are all the Jewish children in Nashville in the school?  And he hung up the phone.

Don’t try this at home.  Rabbi Hadakov could get away with it because he adored my father and let him know it. Famously curt and stoic, when he saw my father he reached up and placed his hands around his neck.

The message is worthy. A sense of displacement, of dissatisfaction, of anguish that why can’t I do more, why can’t I do better, is all-powerful. (If you find yourself conflating anguish with depression (which we all do from time to time) there’s this book out called Tanya that teases out the nuance between the two.  Good read.)

Rabbi Mentlik AH, farbrenging in 770, once burst into tears and in anguish cried I don’t know how to explain it, but it must be different, ess muz zein andersh!!!

And from there, wherever we stand in life, we march forward, besmicha, as chassidim.