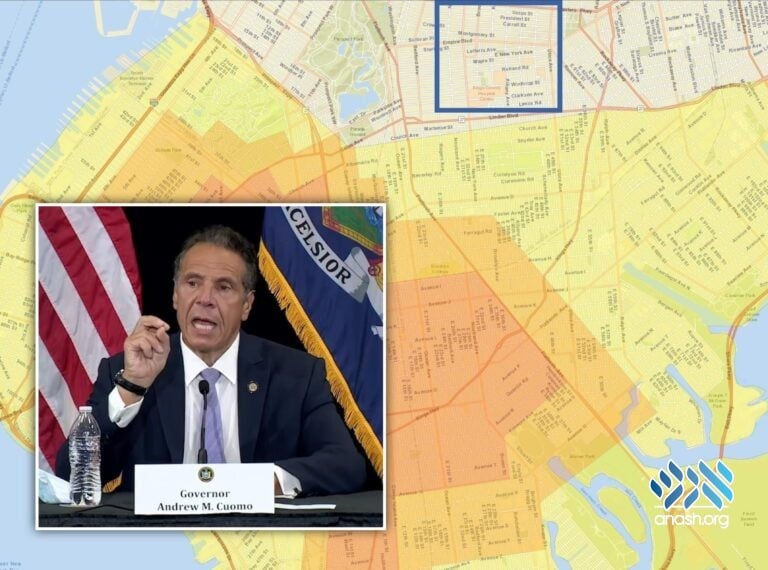 The color-coded, COVID hotspot zones established by former Gov. Andrew Cuomo last October did not follow specific metrics, vindicating allegations by Jewish communities that their neighborhoods were targeted for shutdown.

The color-coded, COVID-19 hotspot zones established by then-New York Gov. Andrew Cuomo last October did not in fact follow specific metrics, according to a new report by Hamodia.

The admission is an apparent vindication of Orthodox Jewish communities who alleged their neighborhoods were targeted for shutdown by the since-disgraced governor.

Attorney General Letitia James this week released the full transcripts of the interviews by the investigators, who were looking into allegations including Cuomo’s harassment of state employees, his handling of COVID, and his publishing a book about his leadership during COVID.

Jewish activists who had fought the shutdown said the Health official’s statements provide proof of what the activists had alleged since the Cluster Action Initiative was first enacted.

Just hours before announcing the Initiative, Cuomo held a conference call with rabbis and community leaders, and he indicated that if they kept shuls at 50% of maximum occupancy, further restrictions wouldn’t be necessary. “The current rule is no more than 50%. In any indoor gathering 50% of capacity,” Cuomo told the Jewish leaders. “We have to follow that law. If we don’t follow that law then the infection rate gets worse. Then we’re going to have to go back to closedown. And nobody wants to do that. But I need your help in getting the rate down, and the rate will come down if we follow the rules on the mask and the social distancing and the 50%.”

But Cuomo then shocked the leaders by announcing his Cluster Action Initiative with severe restrictions: In the most-restrictive “red” zone, guidelines included limiting services at houses of worship to 10 people or 25 percent of maximum occupancy, whichever was fewer.

Jewish leaders argued they were being targeted by Cuomo, saying there were no metrics to justify delineation of the various zones that were enacted by the whims of the executive acting with emergency authority.

In an appeal to the U.S. Supreme Court, the Agudah brief argued that Cuomo’s “efforts to whitewash the Cluster Initiative’s discriminatory origins with later-adopted and ever-evolving metrics and inconsistent re-designations demonstrate that the Cluster Initiative is not based upon science or data but on one man’s ever-changing notions: whether those notions are to target a religious minority to tamp down the ‘fears’ of the majority, or to evade this Court’s review for his discriminatory words and actions.”

The Supreme Court ultimately tossed the Cluster Action Initiative following the lawsuit by Agudah and the Brooklyn Catholic Diocese, saying the Initiative unfairly restricted religious worship because “essential businesses” were allowed to remain open with fewer limitations than houses of worship.

Kalman Yeger, a New York City Councilman who represents former red-zone neighborhoods of Boro Park and Flatbush, said, “When we said last year that Gov. Cuomo was clearly targeting our community for destruction, we were laughed at and derided as conspiracy theorists. These transcripts prove we were right all along. Gov. Cuomo was deliberately targeting our community. His despicable behavior is now out in public.”