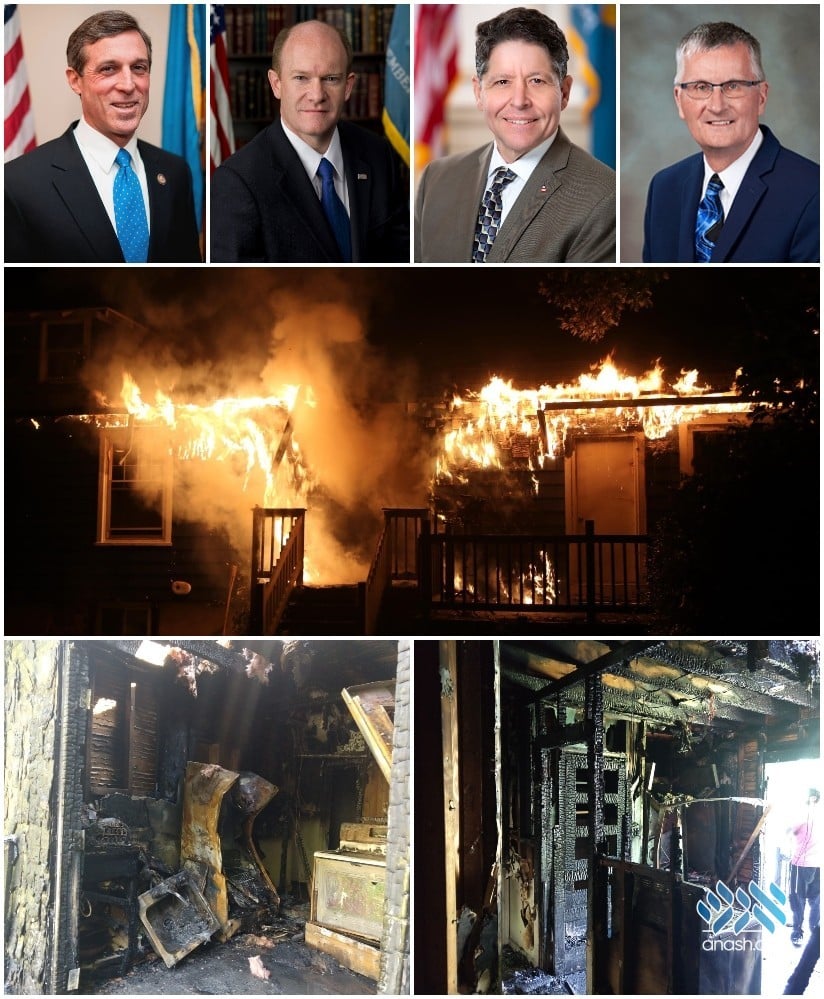 A list of elected officials joined Hillel and other Jewish organizations in condemning the arson at University of Delaware’s Chabad House. Shliach Rabbi Avremel Vogel said that “they are shaken by the event, but humbled by the response.”

Elected Delaware officials, University of Delaware joined Jewish organizations in condemning the arson at the Chabad Center for Jewish Life and affirming their support for the Jewish community.

The Tuesday night fire devastated the Chabad House led by Rabbi Avremel and Shulie Vogel. Investigators ruled the fire to have been arson, but the motive is still under investigation.

Shliach Rabbi Avremel Vogel said that they are “deeply pained by the willful destruction that took place at the Chabad Center at UD yesterday with damages of at least $200,000.”

“While we are shaken by everything that has happened, we are very grateful to the fire department for their quick response, to the university, faculty, campus police and the UD community for their support and especially to the students and alumni, who have been so great, and are working closely with the authorities in their ongoing arson investigation and are firm in our resolve to rebuild and do even more than what we were able to before this happened,” he said.

“It is heartbreaking to learn the fire at the Chabad Center was set intentionally,” Mayor Jerry Clifton said. “This is a sickening act of hostility that threatens the safety and security of our inclusive, welcoming neighborhoods. My thoughts are with the Jewish community and those affected by this tragedy.”

UD President Dennis Assanis wrote in a letter to students that the UD Police are assisting the fire marshal and Newark Police with the investigation.

He called the arson a “disturbing incident”, and noted that the university has counselors available for students who need them.

“Our thoughts are with our colleagues, friends and students at Chabad at the University of Delaware. We are one Jewish Blue Hen Community and will do whatever we can to help you build back,” they said.

“It’s upsetting to learn this fire at the Chabad Center for Jewish Life was intentionally set,” he said. “This is a place of worship and community, and this kind of violence is unacceptable. Thinking of and praying with Delaware’s Jewish community.”

Sen. Chris Coons said his “heart goes out to the Delaware Jewish community.”

“The fire at the University of Delaware’s Chabad Center, which appears to be intentional, reignites concerns around potential hate crimes and is unacceptable,” Coons said. “I am committed to protecting Delawareans and Americans of all faiths and uprooting the painful prejudices that are all too familiar for far too many Americans.”

State Rep. Paul Baumbach said he is confident Newarkers will rally around the Jewish community, as they have done after similar incidents in the past.

“It is time for our community to respond, with love, to show that #HateHasNoHomeHere,” Baumbach said. “I expect that a rally which demonstrates the broad and deep love and commitment for our Jewish friends and neighbors will be announced in the coming days.”

Classes at Delaware University are scheduled to start next week. Under the current circumstances, the Shluchim need to find a new building for the new school year and Tishrei as soon as possible. Donations can be made at: UDFireRelief.com