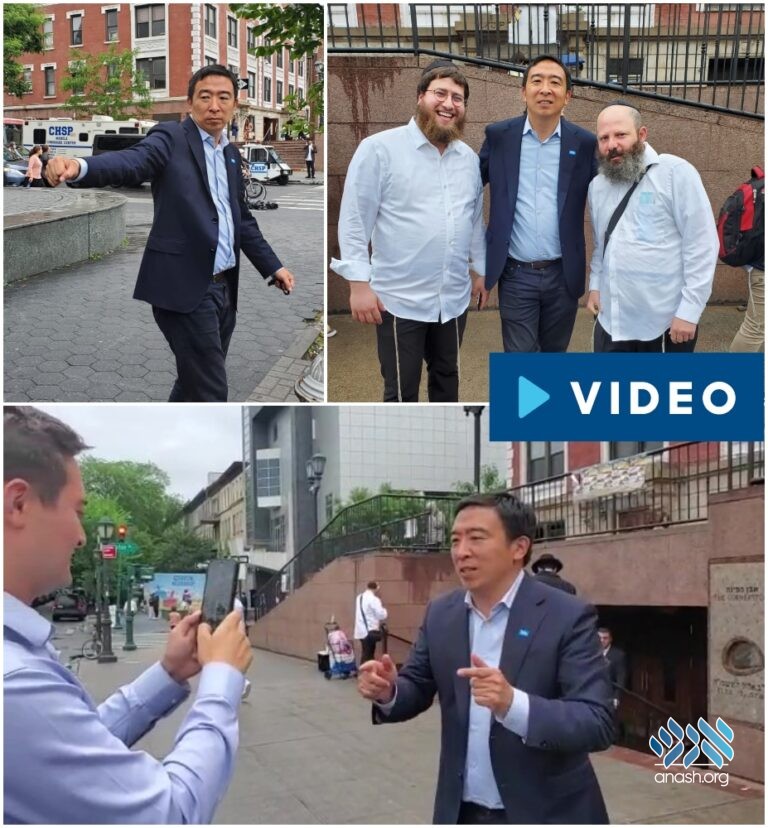 Mayoral candidate Andrew Yang paid a brief election day visit to Crown Heights, where he recorded a video praising Chabad for their work around the globe, and urging residents to go out and vote.

Arriving by surprise, Yang was greeted by bochurim and residents milling around 770. During his brief visit, which lasted for approximately 20 minutes, Yang recorded a video message to his supporters, urging them to go out and vote.

“I am standing in front of Chabad World Headquarters. Chabad does incredible work, bringing people all over the world closer to their faith,” Yang said. “We gotta get out and vote before 9:00 PM so we can change New York City to work for us and our families.”

Yang’s visit followed the visit of Eric Adams the previous night, where Adams, the leading candidate, was praised by Crown Heights activists and residents as an “old friend” of the community. The Tuesday visit stood in stark contrast, with no activists and only a few bochurim interacting with Yang on his rushed visit.

Polls released on Monday showed Eric Adams with a solid lead over Yang, with the Brooklyn borough president the first choice of 28 percent of Democratic voters, followed by Andrew Yang at 20 percent, former Sanitation Commissioner Kathryn Garcia with 15 percent and former City Hall lawyer Maya Wiley in fourth with 13 percent, according to an Ipsos survey.

Adams was also endorsed by United Crown Heights, as well as a long list of Jewish communities across the state. In a list of endorsements released by the group, only Adams was listed as endorsed for Mayor.