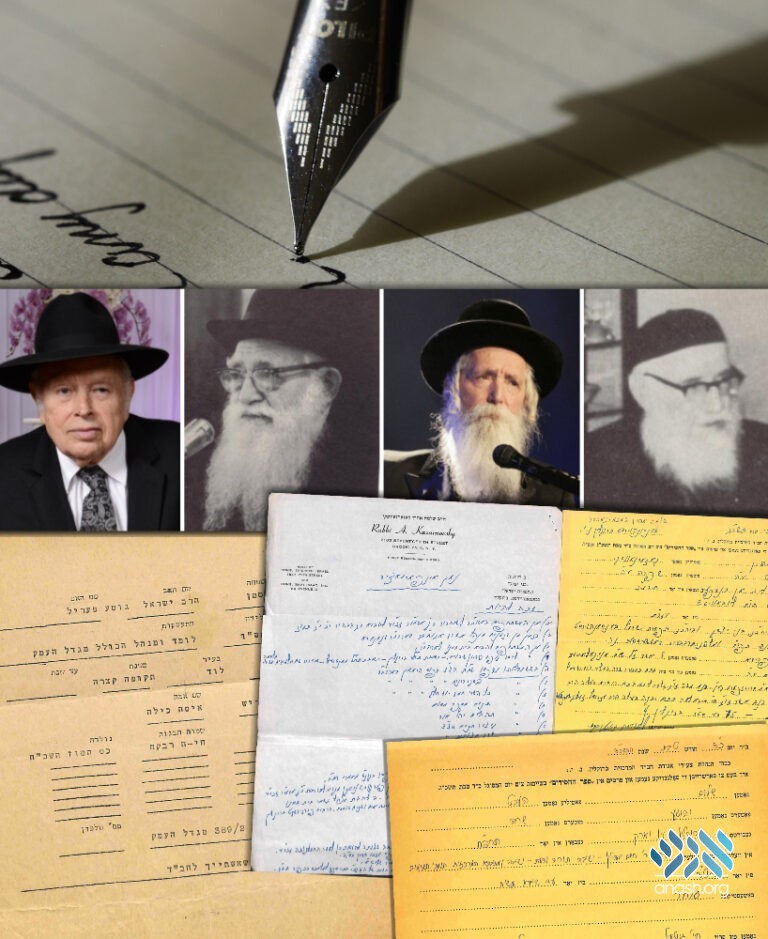 In the letter describing why he was starting the ‘Sefer Hachassidim’, the Frierdiker Rebbe wrote that the book will be a “a book for eternal remembrance…a book of life.” Anash.org presents a second installment of some of the most intriguing cards

In the letter describing why he was starting the ‘Sefer Hachassidim‘, the Frierdiker Rebbe wrote that the book will be a “a book for eternal remembrance…a book of life.”

Indeed, reading the terse lines inscribed by the hundreds of chassidim, one can almost picture the chassidim who filled them out, and it almost brings these personalities, whom we’ve heard so much about, back to life.

A previous Anash.org article sharing some of the most enthralling cards garnered much interest, and many readers reached out with more of the cards that had been filled out with more than just the basic information.

With many thanks to the readers, we present a second installment of some of the most interesting cards, shedding light on the lives and personalities of chassidim we knew or heard about for decades.

Did you discover any new information or fascinating story in the cards? Let us know in the comments below.

Rabbi Sholom (Sidney) Hecht, who passed away recently, was the youngest brother of the famed Hecht family merited to have a special connection with the Rebbe. It is said that he had an ‘open-door policy’ by the Rebbe, and had permission to enter the Rebbe’s room whenever he so desired.

In his card he wrote his name, his parents’ names, and the name of his wife, like many cards before and after his.

However, in the line where one was to fill out where he learned in yeshiva, one small line stands out. He wrote that he first learned in Yeshivas R’ Chaim Berlin, then in Torah V’daas and then in Tomchei Tmimim. He begun his studies in 5694, he wrote.

What year did he conclude his studies in Tomchei Tmimim? R’ Sholom, by then already married and in business wrote “Until Moshiach comes!”

Rabbi Shlomo Aharon Kazarnovsky was one of the prominent activists in Chabad history. He served on the boards of virtually every one of Chabad’s central institutions and was entrusted by the Frierdiker Rebbe and Rebbe with many sensitive missions.

In his submission he filled out a full paper detailing a long list of activities he had done over the years, including getting US politicians to push for the Frierdiker Rebbe’s release from Soviet Russia, being involved in the printing of a list of seforim, helping purchase the Rebbe’s house on President St., and fighting in court for the right to build the Frierdiker Rebbe’s Ohel.

Yehi Ratzon that I should have a shaychus

Rabbi Yitzchak Dovid Grossman is the Chief Rabbi of Migdal HaEmek, founder and dean of Migdal Ohr educational institutions, and is known for his work with children from disadvantaged and troubled homes, having rehabilitated tens of thousands of youth. He is also very close to the Rebbe and Chabad, and served as the Rosh Yeshiva of Tomchei Tmimim Migdal HaEmek for a while.

In his card, filled out by typewriter, the normal information is all in its right place, including the fact that he learned in Tomchei Tmimim Lod for a short while.

At the end of the card, the Israeli version added a line that the American cards did not have. “What is your connection to Chabad?” it asked, seemingly due to the number of cards filled out by those that wouldn’t necessarily be considered Lubavitchers in the average sense.

Rabbi Grossman responded to that query as well.

“Yehi Ratzon that I should have a shaychus to Chabad.”

Harav Chaim Mordechai Perlov learned in the original Yeshivas Tomchei Tmimim in Lubavitch, was a renowned rov and a prominent talmid chochom. Yet, he is also remembered for publishing a book of stories, and perhaps his card can give a glimpse into the reason why.

After filling out the regular card Harav Perlov filled out a separate paper with a story, writing that he is not sure how much it would interest the questioners.