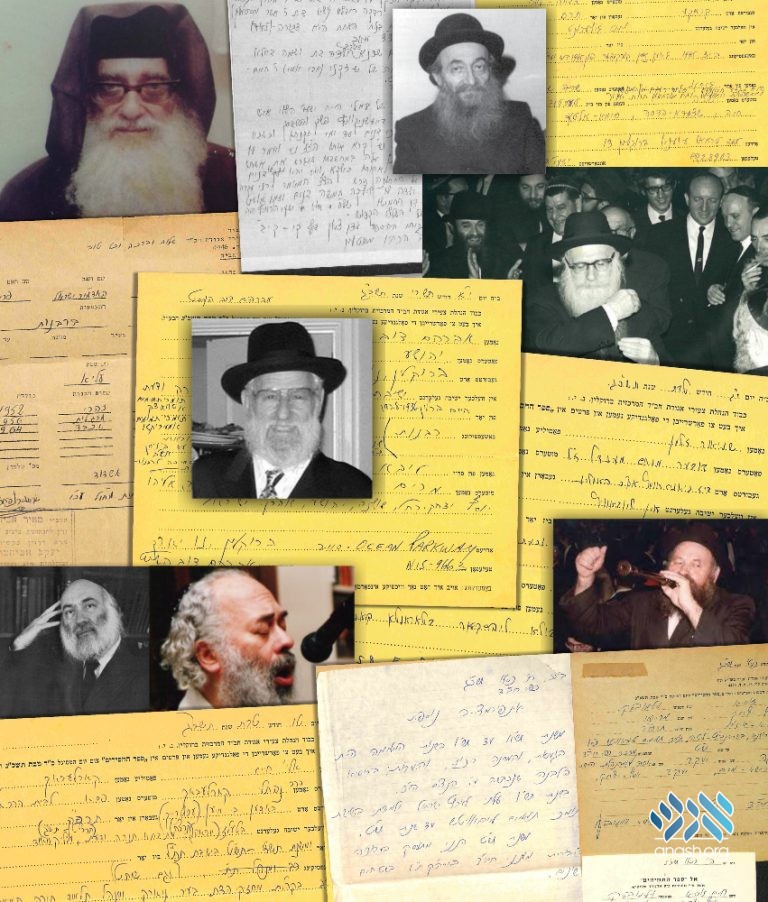 The cards filled out for ‘Sefer Hachassidim’ and just recently published for the first time by the Central Chabad Library contain many fascinating stories and vignettes, shedding light on the lives and personalities of many chassidim.

The cards filled out for ‘Sefer Hachassidim’ and just recently published for the first time by the Central Chabad Library contain many fascinating stories and vignettes, shedding light on the lives and personalities of many chassidim.

Each card contains the names of the chossid who filled out the card, together with the names of their family members, their date and place of birth, and the period of their study at Chabad yeshivas.

The newly released information sheds light on the history of hundreds of Chabad families, giving them a glimpse into the lives of their grandparents, uncles, aunts and family members.

Anash.org chose a sampling of some of the most interesting to read and enjoy.

One card was filled out by Harav Meir Abuhatzeira, the Baba Meir, son of the renowned Baba Sali.

The Baba Meir had a close relationship with the Rebbe. Throughout the decades, they exchanged many letters, and the Baba Meir signed on many proclamations encouraging his followers to fulfill the Rebbe’s mivtzoim.

It is unclear why the Baba Meir filled out the card, being that he was not a Lubavitcher per se. In the line where one had to write his connection to Chabad, the Baba Meir wrote “a friendly connection”.

The card filled out by Rabbi Eli Chaim Carlebach is for the most part unremarkable. The names, dates and information is similar to the tens of other cards in the collection.

What catches the attention is one line at the very end of the card, after the signature.

“Don’t forget my brother Shlomo, my twin,” he writes, referring to Shlomo Carlebach, who by then had long left the Lubavitch movement. The line seems to be calling out to the Rebbe, pleading that despite all, his brother be kept in mind. “His information is the same as mine!”

Now, From Hashem, Without Any Keli

Rabbi Zalman Duchman was an unforgettable chossid, known for being a shadar, chazzan and a storyteller.

His personality shines across even in the short few lines recorded on the small card. One of the questions asks about the current occupation of the one filling out the questionnaire.

Reb Zalman writes “First trade, then working, and now [I receive sustenance] from Hashem without a keli – utensil.

In a Ghetto, a Concentration Camp and the Forests.

At the bottom of each card, a line was printed, requesting that if one had any additional important information, they should write in on a separate card.

While not too many chassidim filled out an additional paper, the ones that did provided invaluable historical information. One of the most striking is the letter included by Reb Zushe Wilmovsky, known as Reb Zushe Partisan.

The letter is brief, but when reading it, one can get a sense of the intensity in the words.

“I was in the ghettos, in a concentration camp, and then in the Russian forests,” he writes, before describing his years in Eretz Yisroel.

After arriving in USA, Harav Yeshaya HaKohen Matlin merited to be the Rebbe’s sofer, who the Rebbe entrusted to check his tefillin. He also was one of the select individuals who the Rebbe sent Shaloch Manos to.

In his card, one line catches the eye. Where one was supposed to fill out where they had learned in yeshiva, Reb Yeshaya simply wrote “I didn’t learn [in a yeshiva].”

One of the First Ten Temimim

“I was one of the first ten temimim with whom the yeshiva of Tomchei Temimim in America was founded, at the instruction of the Frierdiker Rebbe,” wrote Harav Avrohom Dov Hecht.

Rabi Hecht, who later became one of the most prominent rabbis in North America and the leader of the largest Sephardic shul in the U.S.A., always recalled the great merit he had in being one of the first ten, and that pride is clearly evident on the card he filled out.

Did you discover any new information or fascinating story in the cards? Let us know in the comments below!