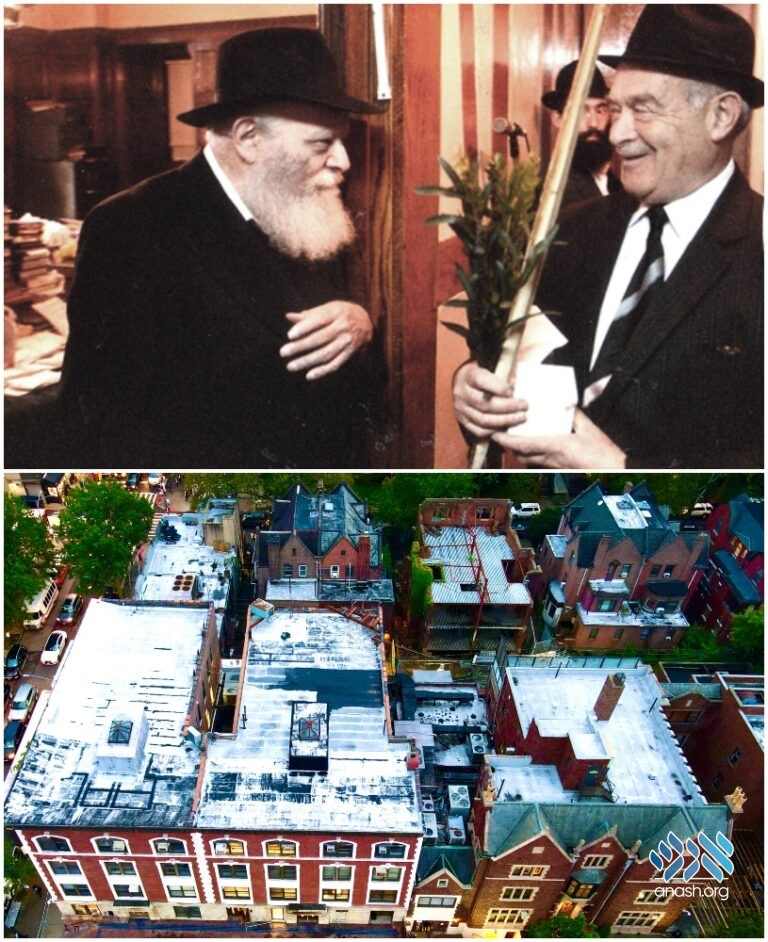 For a number of years, the Rebbe allowed R’ Zalmon Jaffe to stay in an apartment on the top of the Union Kollel during their visits to New York. On one occasion, the Rebbe visited the building personally to inspect its state, stopping first in the Kollel, which is now set to be rebuilt.

For a number of years, the Rebbe allowed R’ Zalmon Jaffe to stay in an apartment on the top of the Union Kollel during their visits to New York. On one occasion, the Rebbe visited the building personally to inspect its state, stopping first in the Kollel, which is now set to be rebuilt.

R’ Zalmon recorded the story in his classic style, and published it in his “My Encounter With the Rebbe” series.

My Encounter With the Rebbe
5th Installment – Shavuos 5733

Roselyn, as was her usual custom, waited in the hallway for the Rebbe to walk past her on his way into the shul (synagogue). She was not disappointed. When the Rebbe left his office and passed Roselyn, he gave her a lovely, glorious smile. Nu, one satisfied customer.

I received my “rations” in the shul. Our Sages say, “Words that issue forth from the heart reach directly to another’s heart.” The Rebbe’s eyes are most eloquent and expressive. He does not have to say anything and when his eyes lit up with that wonderful, superb smile, the message that the Rebbe was pleased to see me came over loud and clear. There could be no misunderstanding.

Within minutes of our arrival from England, both Roselyn and I had, thank G‑d, already received our reward for coming, and this was only the beginning!

We soon found out that yesterday the Rebbe visited “our” apartment. (For a number of years, the Rebbe would loan us the apartment upstairs from the kollel (study hall) for our stay in Crown Heights.)

Unfortunately, we were out. In fact, we were still in England. What a pity we were not present to welcome the Rebbe, to be his hosts, on such a unique occasion. We still felt that the Rebbe’s actually being in that abode – even in our absence – was a great zechus (merit).

I do not know exactly what transpired, nor do I know why the Rebbe decided to inspect the premises. However, the net result was that for the first time ever, our apartment – and indeed the kollel itself – was spic-and-span, neat and tidy!

But 770 was in turmoil! Angry accusations and complaints were leveled at me. “How dare you request the Rebbe to inspect your apartment to ensure it was clean?” some demanded!

One fellow remonstrated with me in the following terms: “If it’s your apartment, what business do you have asking the Rebbe to check on its condition, and if it’s the Rebbe’s, then what does it have to do with you?” A real gemora kepple (Talmudic mind).

Of course, I would never have had the chutzpah to suggest such a thing to the Rebbe. Moreover, I am not so foolish or “big headed” as to believe that had I made such a request, it would have had any effect whatsoever!

Still it was interesting to find out what did occur.

It seems that when Rabbi Binyomin Klein called at the Rebbe’s home on President Street to drive the Rebbe to 770 (as usual), the Rebbe asked him to first drive down Union Street in order to stop at the kollel. This was the first time ever that the Rebbe visited the kollel, and there was no prior warning or intimation to anyone.

Just imagine this scene: a very untidy room with bottles, cigarette-ends and papers strewn on the floor and tables. Some of the young men are studying while others are just lounging or lolling about. Everyone’s attire is extremely casual in their shirtsleeves, when in walks the Rebbe! I would not like to have been in their shoes for anything.

I would hate to have been one of those young men who had pleaded with the Rebbe to be allowed to remain to study in the kollel for additional time, and who – on this most important occasion – was conspicuous by his absence.

Overall, the Rebbe was very pleased to see the young men learning, except that they were all studying different mesechtos (tractates), instead of the same one.

The Rebbe ascended the two flights of stairs (to the apartment) and inspected the place, with the result as aforementioned, a nice, clean apartment. The next morning the kollel men received a strongly worded memo from the Rebbe enumerating all the points that must be attended to in the next three days or else the kollel would be closed down.

When we initially arrived at the kollel, there was still a great deal going on. It was a hive of industry and much activity. The men were painting, cleaning and scrubbing, hammering and banging. An electric saw was being used and furniture fitted. They did a magnificent job and the whole place was rejuvenated. It was a striking improvement. Rabbi Chodakov (the Rebbe’s head secretary) later remarked to me that it was a great chizuk (source of strength) for them, and that they would all ultimately receive great benefit from the Rebbe’s surprise visit.

My son-in-law, Shmuel Lew, was also in Brooklyn for Shavuos together with two of his sons – my grandsons – Yosef Yitzchok (a few days shy of his ninth birthday) and Menachem Mendel (7). Shmuel, together with (our haulage contractor) Yossi Shemtov brought our six cartons from Mendel and Sarah Shemtov’s house – our storage depot. These boxes, which had been stored for the past twelve months, contained our cutlery, crockery, cloths and the rest of our household equipment needed to make our apartment habitable. Shmuel remarked that Jewish families generally have a complete change of utensils for Pesach. Well, we also have it for Shavuos!