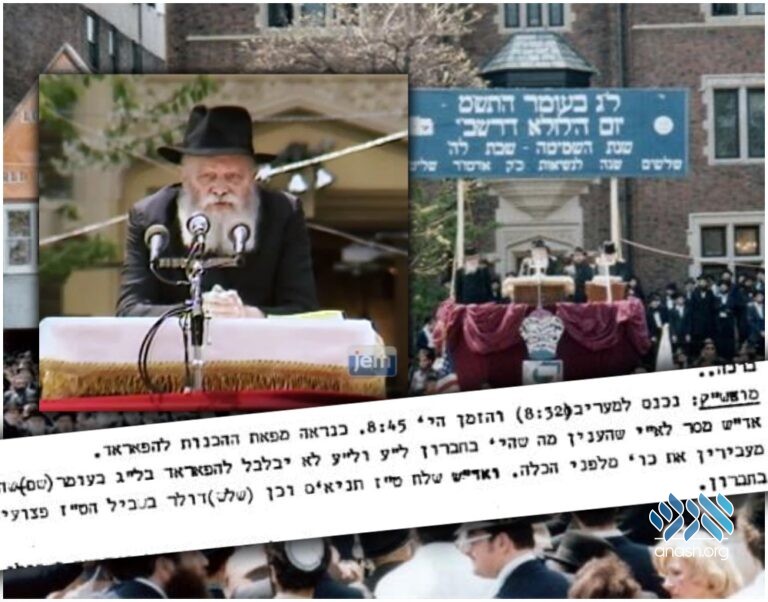 In the year 5740, there was a terrorist attack in Chevron on the night before Lag B’omer. The parade organizers asked the Rebbe whether they should cancel the event, feeling that they couldn’t celebrate in their deep pain. The call came in at 2 AM with the Rebbe’s powerful response.

As the Jewish world is reeling from the recent unfolding tragedy in Meron, our instinctual reaction is always the same: We look to the Rebbe’s words, where we know we will find direction and light to move ahead through the darkness.

In the year 5740, the Rebbe encouraged shluchim to make Lag B’omer parades in as many locations as possible. In accordance with the Rebbe’s wish, a parade was planned in Chevron as well.

But just Lag B’omer, tragedy struck. A terrorist opened fire at a group of Yidden heading back from Me’aras Hamechpala on Friday night, the night of erev Lag B’omer. Six Yidden were killed, five of them yeshiva bochurim. The levaya was planned for Sunday, Lag B’omer, and the community was thrown into a state of deep pain and shock. Everyone agreed that there was no point in continuing with the parade, since no one would come in any case.

Rabbi Halperin, who was one of the organizers of the parade, told his side of the story:

“The night of Lag B’Omer, I sat in bed and tried to reach the Rebbe’s office, calling over and over again. Boruch Hashem I eventually got through, and asked the urgent question – Should we continue with the parade in Chevron, or cancel it because of the terrible tragedy?”

“At 2:00 AM, the phone near my bed rang. My heart skipped a beat. Rabbi Binyomin Klein was on the line, the Rebbe’s secretary. R’ Binyomin said that he had an answer from the Rebbe. He read it me word for word. My body trembling, the Rebbe’s words were loud and clear: ‘Maavirin es hames milifnei hakallah – When a mes and a bride confront each other, the mes is turned so the bride can pass. Azkir al hatzion – I will mention it at the Ohel.’ “

It was 8:45 pm in New York when the Rebbe gave over the message that the parade should continue despite the tragedy. The Rebbe then sent 16 Tanyas and 3 dollars for the 16 who were injured.

And the parades go on…