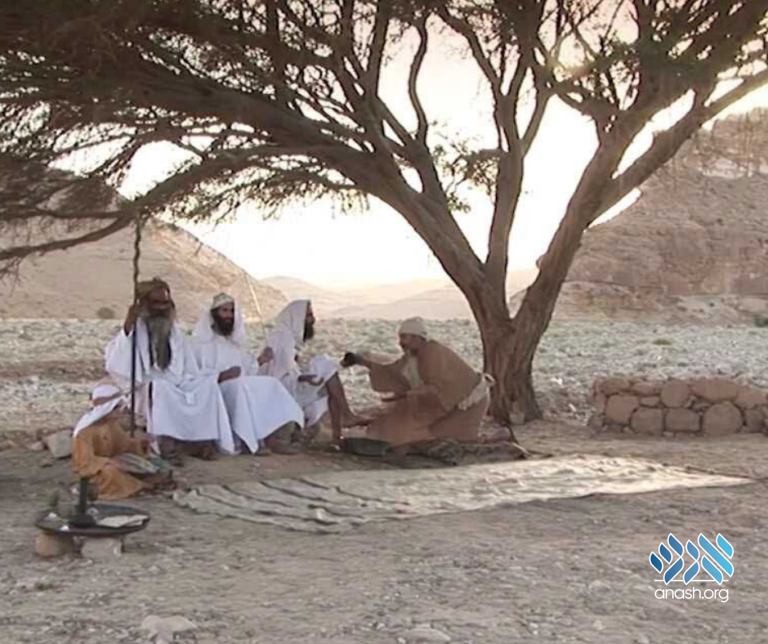 Did the Malochim sin when they ate meat after milk? And what are the halachos regarding pet food? Rabbi Aryeh Citron discusses these questions.

The beginning of the Torah portion of VaYeira describes how Avraham Avinu hosted three men who turned out to be angels. As far as what he fed them, the verse says “And he took cream and milk and the calf that he had prepared, and he placed [them] before them… and they ate.” This seems to indicate that Avraham served the angels both meat and milk and that they ate it.

The Midrash (Shochar Tov 8:16) touches upon this when it recounts the following: When G-d wanted to give the Torah to the Jewish people, the angels argued that the Torah should be given to them since they are pure and eternal just like the Torah. G-d replied to them that many of the Torah’s laws don’t apply to them, such as the laws of procreation, death, illness, and impurity.

Later, when the Jewish people sinned with the golden calf and Moshe came to receive the second set of Tablets, they repeated their claim that the Torah should be theirs since the Jews had sinned. G-d said to them, “You’re always arguing with the Jewish people. [But] when you went to Avraham, you ate meat and milk, whereas a Jewish boy who returns from school would refuse to eat meat and milk even if his mother would place them in front of him.”

Certainly angels are not obligated to keep the Torah. It was nevertheless not befitting of them to receive the Torah after they had “transgressed” one of its laws (Pardes Yosef in the name of his uncle, the Rabbi of Lask).

What Did They Do Wrong?

It is actually not clear exactly how the angels “transgressed” since one may eat meat after eating milk and cream if one has cleaned out his mouth by eating and drinking. (Some also wait a half hour or an hour. See Y.D. Siman 89.)

Some say that Avraham served them the meat in a heated pan and that they added the milk and cream to it (Pardes Yosef).

The Chatam Sofer (Torat Moshe and Chatam Sofer on the Torah, pg. 74) says that if one eats dairy and then wishes to eat meat he must eat and drink something else in between (see Yoreh De’ah 89). The angels, however, did not do so because, as Rashi points out, Avraham did not serve them any bread. (Although the necessity to eat and drink between dairy and meat is of Rabbinic origin, by not observing this Rabbinic decree they were disqualified from receiving the Torah [see Chatam Sofer on Chullin 105a D.H. Ain].)

Reb Simcha Bunim of Peshis’cha explains (quoted in Pardes Yosef) that milk represents G-d’s kindness (chessed) while meat represents G-d’s severity (gevurah). The Torah forbids the mixing of these foods as this can cause these disparate Divine energies to clash.

This is the mystical reason as to why one may not eat dairy after meat. The halacha states (see Y.D. 92) that when one pours one food onto another one, the temperature of the bottom food overpowers that of the one poured onto it. This is called tata’ah gavar (the bottom one overpowers). Since the meat (gevurah) was eaten first and is below the dairy (chessed) which is being consumed afterwards, this results in a Divine severity overcoming Divine kindness. As such, it is forbidden. On the other hand, when one eats dairy and then meat, the chessed (kindness) overpowers the gevurah (judgment) and the result is an addition of Divine kindness.

All of the above is based on the perspective that this (physical) world is the most significant one and is the focal point of the world. This is why the ruling is that tata’ah gavar – the lower one overpowers. Whereas according to the claim of the angels that they should receive the Torah and be the focal point of creation, the ruling should be that ila’ah gavar – the higher one should overpower. From this perspective then, they should have refrained from eating meat after dairy as the net result (according to this perspective) will be one of Divine severity.

What Was Avraham Thinking?

Based on the above we have to understand how Avraham could serve them meat and milk since he kept the entire Torah. Several answers are offered:

Reasons for the Prohibition of Meat and Milk

Now that we are on the topic of the prohibition of mixing meat and milk, we will discuss some of the reasons as to why the Torah forbids this:

Several commentaries explain that cooking a kid goat in its mother’s milk is a display of extreme cruelty – to cook a baby in the very liquid that was supposed to give it life. As a fence to protect against this practice, the Torah forbade the cooking (and eating or benefitting) of meat and milk together. (Rashbam and Ibn Ezra on Exodus 23:19 and Ramban on Deut. 14:21 cited in Likutei Sichot 6:150 and on)

The Sefer HaChinuch writes (Mitzvah 62 and 92) that there are certain objects in nature which the Torah forbids us to mix as doing so would weaken the spiritual energy that enlivens those items. Meat and milk is an example of this. This is why the Torah specifically forbids the cooking of these foods together as through this kind of mixture these forces can be weakened. The Torah also forbids eating and benefiting from it in order to ensure that no one will cook it.

In a similar vein, Rabeinu Bachaye (Exodus 23:19) says that mixing these two foods can draw together spiritual forces which are supposed to remain distinct. This, in turn, can increase the forces of negative energy in this world. As such, in the Messianic era, when we will no longer have an evil inclination, this mitzvah will become defunct. Similarly, it does not apply to angels who have no evil inclination (see above). (See Likutei Sichot vol. 29, page 122 note 13, for additional sources. See also there note 15 for another reason for this mitzvah based on the Zohar vol 2, pg. 124b.)

The Rambam (Guide to the Perplexed 3:48) suggests that eating a dish of meat and dairy may have been an idolatrous ritual. This may be why the Torah writes this prohibition after the mitzvah of the three pilgrimage festivals (see Exodus 23:17-19 and 34:23-26). The Torah is instructing us not to worship G-d with the idolatrous ritual of cooking and eating this particular dish. The Torah forbids one to even benefit from this dish just as it is forbidden to benefit from idols and from objects used for idol worship (see Deut. 7:26).

Rabeinu Bachaye explains that the body transforms blood into milk. When milk is cooked with (red) meat it reverses that process, and the milk gets the properties of blood. As such, the Torah forbids us to eat this dish since eating blood can cause one to have negative (animalistic) character traits. The Torah associates this mitzvah with the pilgrimage to the Bait HaMikdash as G-d wants us to have clear hearts and minds when we go to “see” Him rather than having a cloudy mind and a (spiritually) murky heart.

Despite all of the above explanations, many commentaries say that this mitzvah is a prime example of a chok – a mitzvah whose reason remains beyond our comprehension. (See Rambam, end of Hilchot Me’ilah and Rabeinu Bachaye ibid).

It is forbidden by Torah law to benefit from dairy and meat that is cooked together. As such, one may not feed such a food to one’s animals.
Some say that it is also forbidden to feed a Bassar Bechalav (meat and dairy that were cooked together) to any human being, even a stranger, or an animal even if it is a stray animal (Issur veheter ha’aruch of Rabeinu Yonah, 21:12 and Toras Chatas, 85:3).

This is based on the Jerusalem Talmud (Pesachim 2:1) that says one may not feed chametz (leavened bread) on Pesach to any animal even though this does not provide the person with any benefit. Some add that doing so is considered a benefit as it is a pleasure to feed another living being (Mishnah Berurah 448:28 based on Magen Avraham 448:9 and Levush 448:6).

Others say that the prohibition against feeding stray animals only applies to Chametz on Pesach concerning which the Torah writes (Exodus 13:3) lo yei’achel (it shall not be eaten), whereas in the case of other foods from which one may not benefit, this prohibition does not apply.

It is permissible, however to discard a meat and milk mixture in a place where an animal may find it and eat it at some point in the future (based on Magen Avraham 448:2).

Meat of a Non-Slaughtered Animal

One may not cook the meat of a kosher animal that was not slaughtered ritually (this is called neveilah) with dairy. Doing so would be a Torah violation (Rambam, Laws of Ma’achalot Asurot 9:6).

If such meat was cooked with dairy, however, the Rambam writes, one who eats it (G-d forbid) would not transgress the prohibition of meat and milk, per se. Of course, the mixture would be forbidden to eat as non-kosher (i.e., non-slaughtered) meat. But if, one were to eat it, one would be transgressing on only one prohibition (of eating non-kosher meat) and not on eating Bassar BeChalav.

The Rambam explains that the reason for this is that since the meat is already prohibited, it does not become doubly forbidden when cooked with dairy. This principle is called ein issur chal al issur (a prohibition does not take hold on something already prohibited).

The exceptions to this rule are:

None of these exceptions apply in this case.

Others say that it is absolutely forbidden to benefit from non-kosher meat that is cooked with milk. (Bait Hillel 87:1. It is noteworthy that the Beit Hillel doesn’t address the Rambam’s opinion at all. Kanfei Yonah by Rabbi Yonah Landsdofer of Prague 1678-1712, beginning of Y.D. 87. And Chatam Sofer Y.D. 92 based on the Tosfot, Rashba, Kanfei Yonah and Pri Megadim.)

Pet Food with Meat and Dairy

In practice one should avoid feeding one’s pets any food that was made by cooking meat and milk together. One who already has such food should simply throw it out according to most authorities. (Perhaps one may return it to the store from which it was bought it although one will receive money for the item. It would seem that this is considered as voiding the original transaction rather than selling the item for money.)

May we merit that all Judgments be Sweetened to Kindness! Wishing you a Shabbat Shalom UMevorach.

You can sign up to Rabbi Aryeh Cirton‘s weekly parsha halacha email here.