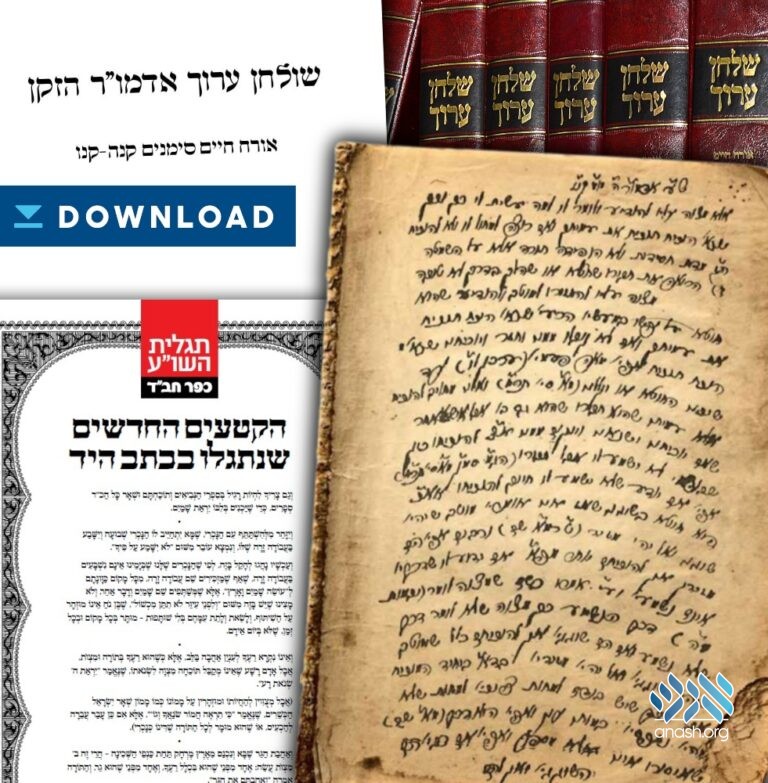 The news that previously-unknown sections of the Alter Rebbe’s Shulchan Aruch had been discovered excited chassidim and Torah scholars world over. But what is contained in those new sections?

The news that previously-unknown sections of the Alter Rebbe‘s Shulchan Aruch had been discovered excited chassidim and Torah scholars the world over. But what is contained in those new sections?

As reported on Wednesday, Chabad scholar Rabbi Avraham Alashvili discovered the new sections while combing through the thousands of manuscripts released by the Rebbe’s library. With few manuscript editions of the Alter Rebbe’s Shulchan Aruch in existence, the manuscript provided a rare look at the Shulchan Aruch before the Tsarist censors redacted large portions.

When comparing the manuscript to the printed version, scholars noticed a large number of differences. Some were major, adding full phrases, and other were minor edits or changes. The largest differences were due to passages removed by the censors, due to their “offensive” nature, as they were discussing dealings with non-Jews, or the laws of geirus, a criminal offense in Russia at that time.

But scholars noticed other differences that could not be attributed to censors, such as the omission of a line in Hilchos Talmud Torah that discussed the obligation to learn Nach. This led some scholars to debate if the manuscript was perhaps and earlier edition that had been edited later by the Alter Rebbe.

In this week’s Kfar Chabad Magazine, where the story first broke, the editors printed a full-page containing each of the larger phrases and paragraphs, where one can clearly notice the difference between the editions.

Another publication, prepared by Rabbi Sholom Ber Shuchat, presents the full text of Chapters 155 and 156, contrasting the printed edition with the manuscript edition, allowing one to compare even the smallest edits.

Anash.org presents both publications, to allow readers to learn and enjoy the newly revealed treasures.