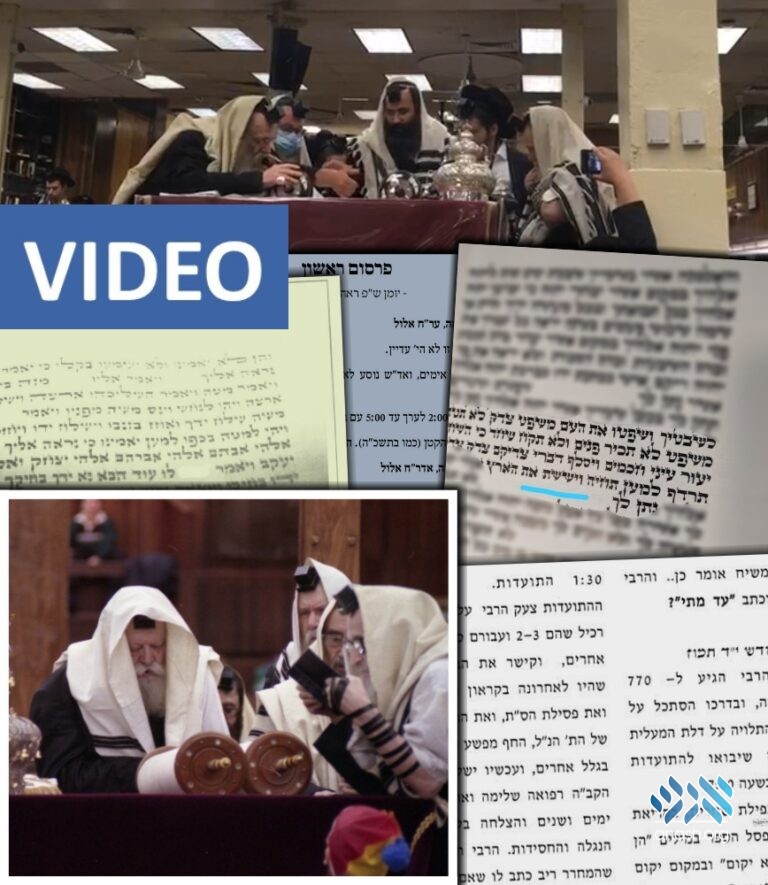 The incident in 770 on Monday, where a mistake was found in the Sefer Torah left many wondering what the proper response would be to such an event. In years past, such occurrences have been addressed by the Rebbe and by community rabbonim.

As per the hora’ah of the Baal Shem Tov that everything we encounter holds a lesson, this event begs the question: What is the message for us, and most importantly – what would the Rebbe say?

Errors in Sifrei Torah were found on a number of occasions before Gimmel Tammuz, and there were times that the Rebbe commented on it, using it to encourage greater adherence to a specific mitzvah or inyan. The context of the mistake itself often indicated the lesson to be learned.

On a Shabbos in the summer of 5747 – 1987, a mistake was found during leining, in the words of Bilam’s bracha to the Jewish people: הֶן־עָם֙ כְּלָבִ֣יא יָק֔וּם. In this case, the word יָק֔וּם was written as יָק֔ים.

During the farbrengen that followed, the Rebbe connected the incident with another two misfortunes that had recently occurred, all of which, the Rebbe pointed out, were due to a lack of Ahavas Yisroel in the community.

A tremendous lightning storm had overtaken the city shortly before, and a bochur had been involved in a serious accident, from which he was still recovering. The Rebbe declared in strong terms that all three incidents were due to slander being spread by a number of individuals, and as a result, innocent people were being harmed.

The sicha was so strong, and so shocking, that it wasn’t published in any transcripts. In Toras Menachem and Sichos Kodesh, one only finds a few lines saying that the Rebbe discusses the concept of Ahavas Yisroel and negated the lack thereof.

Another such incident happened a little over a year later, on Shabbos Parshas Re’eh, Rosh Chodesh Elul 5748. The yoman of that event was published for the first time just this past Shabbos in a kovetz dedicated to ha’oros on the Rebbe’s Torah.

Another similar incident happened after Gimmel Tammuz, on a Shabbos in 5755 – 1995, when the word לִ֔י was missing entirely from Moshe’s words to Hashem: וְהֵן֙ לֹא־יַֽאֲמִ֣ינוּ לִ֔י. In that possuk, Moshe is expressing his concern that the enslaved Jewish people may not believe he as sent by Hashem to redeem them.

The Torah in which the error was found had just been examined that Erev Shabbos and yet the mistake had gone unnoticed!

The general feeling among those in 770 at the time, as described by a bochur in his diary, was that this was a direct message for the Chassidim to strengthen their emunah in the Rebbe’s words concerning the imminent Geula.

The chassidim were shaken by this event, and the Crown Heights Beis Din called an emergency meeting on Motzei Shabbos for the entire community, where rabbonim and mashpi’im spoke of the need to strengthen their emunah. The video of that event is posted below, being published for the first time.

Over two decades later, on Monday 27 Av 5780, a mistake was found in the posuk containing the mitzvah to appoint proper judges. There is no question that such a painful occurrence, finding a Sefer Torah to be possul, has a lesson to teach us.

The only question that remains, is what is that lesson?

Special thanks to RebbeDrive for supplying the video.