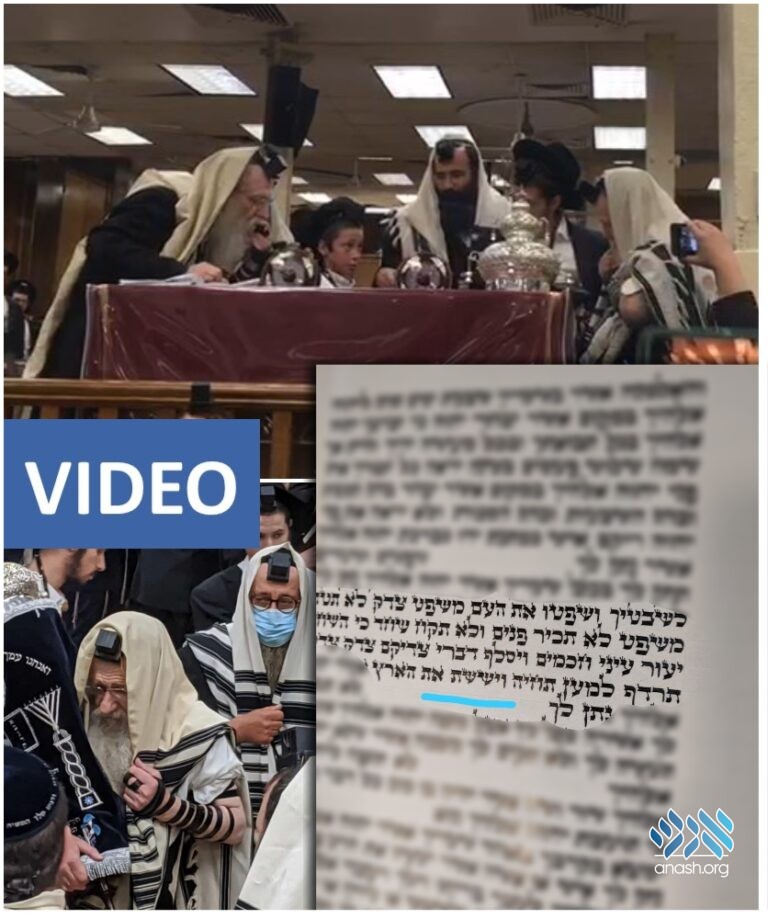 During krias hatorah on Monday in 770, a word was found to be written incorrectly, invalidating the Torah. Participants say it reminded them of a sicha of the Rebbe.

A painful incident took place today during krias hatorah in 770, which participants say reminded them of a sicha of the Rebbe.

The morning began as usual in 770. Shacharis started at 10:00 AM, with hundreds in attendance. Following chazaras hashatz, Kaddish was said instead of tachanun, as a chosson was in attendance. A Sefer Torah was then taken out of the Aron Kodesh and brought to the Bima for the Monday krias hatorah.

The first aliya was given to a Bar Mitzvah boy, while his father proudly watched from behind. Suddenly, towards the end of the first aliya, those on the bima noticed something strange in the Sefer Torah. The final possuk of the aliya begins “צֶ֥דֶק צֶ֖דֶק תִּרְדֹּ֑ף לְמַ֤עַן תִּֽחְיֶה֙ וְיָרַשְׁתָּ֣ אֶת־הָאָ֔רֶץ”. However in this Sefer Torah, the word וירשת had a shin instead of the reish, spelling ויששת…

A Sefer Torah with such a mistake in possul, and must be corrected before being used. But what should be done now? An answer was needed on the spot.

The decision was made to have the oleh recite the brachos after his aliyah, after which a new Sefer Torah was brought out. The baal koreh then began from the beginning of the parsha, and read the first three pessukim for the second oleh as well.

“The decision was made on the spot due to the situation,” Rabbi Yosef Yitzchak Kratz, 770 caretaker, told Anash.org. “I later checked with Harav Yosef Heller and he said that we had done the correct thing.”

“Harav Heller added that there was no need to re-read the first pessukim, but after the fact, what was done was fine,” Rabbi Kratz said.

Families members of the one who commissioned the Sefer Torah told Anash.org that the Torah had been computer checked twice, and checked by a sofer twice as well.

“Before the Sefer Torah was brought to 770, we made sure to have it checked and doubled checked,” they told Anash.org. “This is totally shocking to us.”

Others noted that the same Torah had been used earlier that morning but the mistake was only found by the main minyan.

Many of the participants said that the incident reminded them of a sicha of the Rebbe. The Rebbe once related that when an individual approached the Rogatchover Gaon to receive smicha, he was surprised to receive a test on hilchos krias hatorah. Seeing his surprise, the Rogatchover explained that during other situations, one has the time to check up in seforim before saying the halacha. However if one is a rov and a question arises about a mistake in a Torah during krias hatorah, he has to have the answer immediately.

Others recalled a similar incident in 5755, when a Sefer Torah in 770 was found to be possul. At that time, the Rabbonim of the community announced a gathering for the whole community and spoke of the lessons that must be learned from such a painful incident.