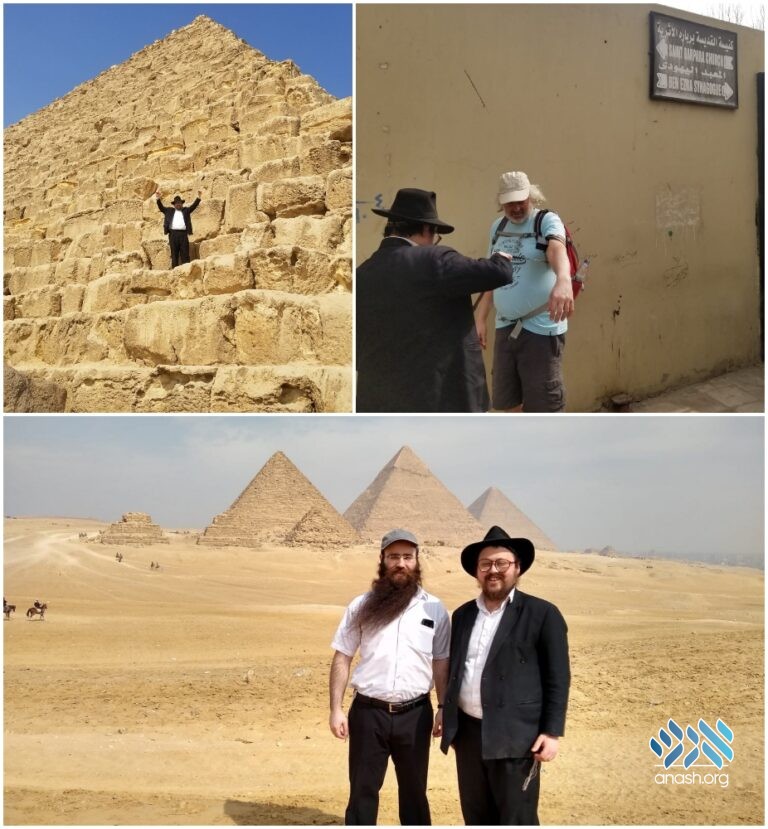 While on a stopover from Morocco to New York, two Lubavitch bochurim walked the streets of Egypt while proudly displaying the classic Chabad hat and jacket. They even got a chance to do mivtzoim.

For two Lubavitcher bochurim, modern-day Egypt was no reason to hide their Jewish dress either, as they walked the streets of the country proudly displaying tzitzis, hats and jackets.

The two bochurim, Chaim Grossbaum of Minnesota and Mendy Eidelman of Vienna were in Egypt on a stopover from Morocco to New York, after they had visited Casablanca, Morocco, where Mendy’s grandparents built a empire of Yiddishkeit, and where his grandmother heroically continues to run the Chabad House, even after her husband’s passing.

The trip back to New York took the two through Egypt, where they had an extended stopover. While there, the two took advantage of the time on their hands and visited some of the famous Jewish and historic sites located in the areas around the airport.

As proud Lubavitch bochurim, the two were not fazed by the fact that Egypt is a Islamic country, nor by the fact that it had been at war with Israel for decades, resulting in some deep-rooted anti-Semitic feelings among some residents. They walked the streets with tzitzis hanging from their belts, yarmulkes on their heads, and wearing the classic Lubavitch hats and jackets.

“We didn’t experience any anti-Semitism at all, and everyone we met was friendly to us,” they told Anash.org. “A few people asked if we were ‘Yahood’ out of curiosity, and still welcomed us when we confirmed our identities.”

“One individual asked if we were Neturei Karta, and when we said no, he asked ‘but you’re not Zionist, right?’,” they said. “That was the extent of our conversations about our Yiddishkeit.”

The pair even got an opportunity to do mivztoim on the streets of Egypt. One of their destinations was the Ben Ezra Shul, the famous shul where the Cairo Genizah was found. When they arrived, however, they discovered that the shul was closed for renovations and tourists were milling around, disappointed. They discovered a group of Israelis, and when asked one tourist gladly agreed to put on tefillin, right then and there.

So in middle of a central street in Cairo, Egypt, just a few weeks before the Yom Tov of Yetzias Mitzraim, and 55 years after the Rebbe launched mivtza tefillin in response to a war against that very country, a Yid rolled up his sleeve to put on tefillin…