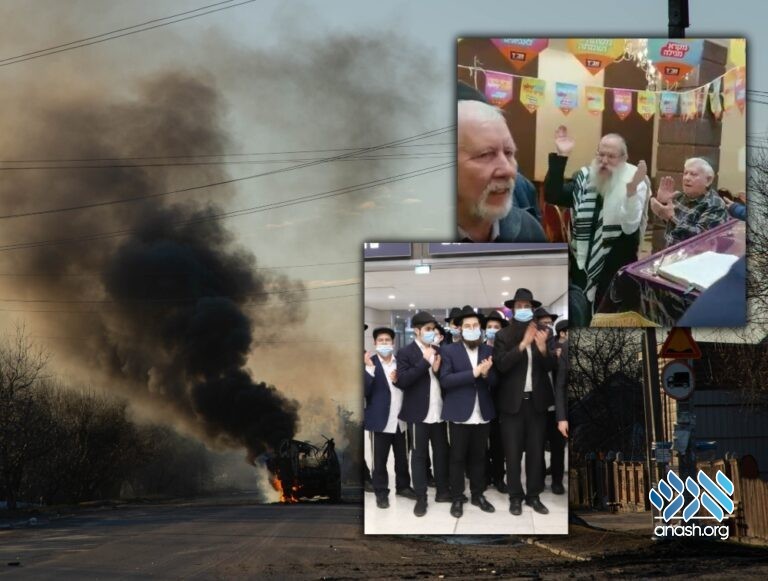 Across the entire Jewish world and beyond, the actions and attitude of the Shluchim to Ukraine during the past two weeks have created an unprecedented kiddush Hashem. But how did they stay so calm and level headed with death staring them in the face?

When Rabbi Chaim Chazan accepted the position of Rosh Yeshiva of the Chabad Yeshiva in Dnipro, Ukraine, he knew he would be faced with many stressful situations. Finding himself in middle of a raging war, however, was something he never even dreamed of.

As the Russian military built up forces on Ukraine’s borders, culminating in a brutal assault, Rabbi Chazan, among many other rabbonim and shluchim, needed to decide one life-or-death dilemma after the next. Throughout it all, their unshakable bitachon and emunah allowed to them lead their flocks with clear heads, making for a global kiddush Hashem.

“The stress was real, the prospect of being caught in the firefight unnerving, but the entire experience was an exercise in implementing all what we learn and daven about every day,” Rabbi Chazan said.

At first, when Russia began amassing troops and issuing threats, 80% of the Ukrainian population, among them large swaths of the Jewish community, did not believe they would actually invade. Even as the bombings began, many still believed they were a pretext to pressure Ukraine into a deal of some sort. Soon enough, however, the situation escalated.

“During the first few days, when Dnipro was relatively safe and the yeshiva continued normally for the most part, the war actually served as a galvanizing force for the bochurim to increase in their learning and Adar joy,” Rabbi Chazan said. “The yeshiva’s menahel worked hard to display a sense of calm, and Dnipro’s Chief Rabbi Shmuel Kaminetsky was a beacon of trust in Hashem.”

On the fifth day on the invasion, the fighting neared Dnipro, and the yeshiva staff decided to evacuate to Moldova, and from there to Germany, where the yeshiva would resume the studies. The trip involved a midnight train journey, lasting 11 hours, and passing through a besieged country and an overcrowded border.

“Both when we were staying in Dnipro, and when evacuating, we did our best to remain focused on what is actually a basic tenet of Yiddishkeit, that Hashem is the “shalit hayochid” – the only true power in control,” he said. “Neither Vladimir Putin, nor Joe Biden, nor any other individual or force controls what is going to happen.”

Across the country, Rabbi Shlomo Wilhelm, Chief Rabbi of Zhitomir, was facing challenges of his own. Besides for providing for the spiritual, physical and emotional needs of his community, he also had to ensure the safety of over 100 Jewish orphans in Chabad’s orphanage. It would take a complicated rescue operation to bring them to safety in Romania as the city was shelled.

When asked if he felt fear at any point, Rabbi Wilhelm explained that while fear is an expected reaction, the lessons he had internalized from the Sefer HaTanya helped overcome the feeling, and even channel it to be a positive force.

“The Alter Rebbe teaches in Tanya, that each individual has two forces inside of him, the yetzer tov which resides in the mind, and the yetzer hara in the heart. The heart’s automatic reaction, therefore, is one of anxiety,” he said. “The solution is spelled out in Tanya as well, to ‘subjugate the heart to the mind’, realizing that Hashem is truly in charge, leaving no room to fear any outcome.”

In fact, he says, the fear can be utilized for the good, utilized to allow one to respond correctly to danger.

“Feeling absolutely no fear could lead one to be reckless. For example, one who is ill, might not visit a doctor if not for the push driven by fear. But fear, tempered by emunah, should never translate into worry or anxiety.”