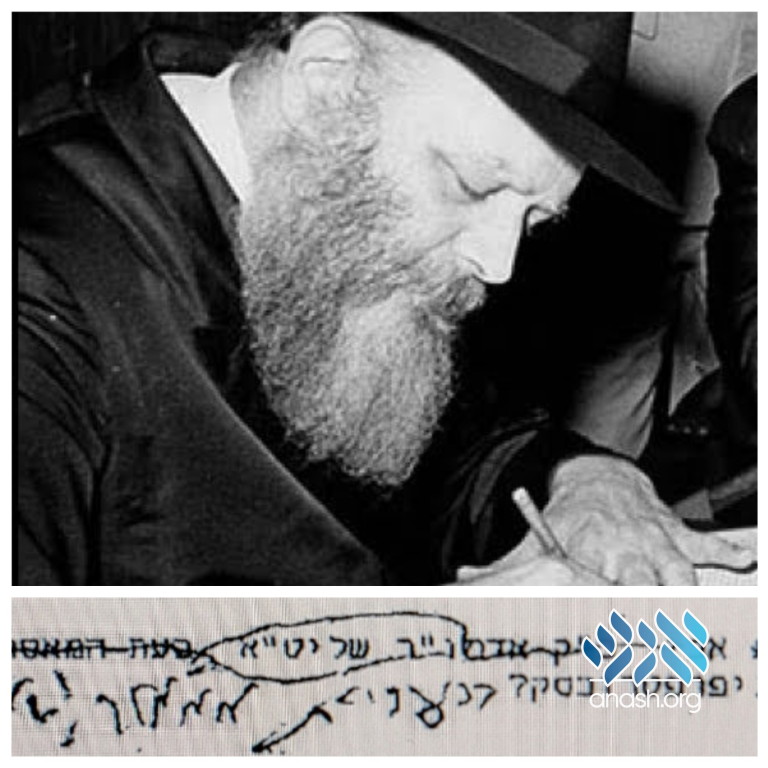 More on the Rebbe’s unique attention when erasing words in the process of editing.

Last Wednesday, anash.org published a study about the great lengths the Rebbe would take to refrain from erasing Hashem’s name or even G-dly terms. We have since received many positive comments and responses.

Some readers sent us pictures of other edits made by the Rebbe, where we see other words that the Rebbe was careful not to erase.

In this example, we see an edit where it appears care was being taken not to erase a reference to the Rebbe himself. .

The Rebbe crossed out the rest of the line, but only circled the words כ”ק אדמו”ר שליט”א – alluding to the fact that those words should also be removed, without actually erasing them.

Another picture we received may possibly shed light on the reason the Rebbe didn’t erase the words “the Rebbe Shlit”a”.

The above picture is from an answer to Rabbi Sholom Ber Levin, librarian of the Aguch library. Rabbi Levin asked the Rebbe if the soviets seized his father, Reb Levi Yitzchok’s seforim at the time of his arrest in 5699 (1939). The Rebbe crossed out the line about the seforim being seized, in other words answering that they were not. When crossing out the words אבי כ”ק אדמו”ר שליט”א (the Rebbe Shlita’s father), he only circled the word Shlit”a and did not erase it.

It is impossible for us to claim to understand the Rebbe’s intentions. A possible suggestion, however, is that the Rebbe’s main concern was not with his own name, but with the word Shlit”a, a blessing for the Rebbe to live long. The Rebbe did not want to erase that as if to show that he Chas Vesholom does not want the blessing to be fulfilled. This could explain why sometimes the Rebbe would indeed erase the words כ”ק אדמו”ר (the Rebbe) but not the word שליט”א, as in the second picture.

Here is another picture we received that possibly supports the above explanation:

These are edits on the synopsis of the history of the Rebbe’s great-great-grandfather, Harav Avrohom Dov Lavut, the author of the Sha’ar Hakolel. It mistakenly stated that after the histalkus (passing) of the Alter Rebbe, Harav Lavut became a chosid of the Rebbe Maharash, when it should have read after the histalkus of the Tzemach Tzedek. The Rebbe crossed out the word אדה”ז (Alter Rebbe) and wrote Tzemech Tzedek instead.

Some of our readers attested to seeing a picture of the Rebbe’s edits where he did not cross out names of people (or at least living people) in general. Anash.org has so far not been able to locate an example; in fact here are two pictures where the Rebbe did erase the names.

[We do not know the background of this edit, and encourage anyone who does to share it with us.]

Here, the editors of a certain kovetz thanked those who helped to prepare it, mentioning  a few names in particular. It seems that the Rebbe did not want any specific names to be mentioned, thereby excluding any others who may have helped as well. The Rebbe erased the names, leaving only a general appreciation for all those who helped.

If anyone does have a picture of an edit where the Rebbe did, in fact, take care not to erase a person’s name, or if anyone has any other comments or information to share on this topic, we encourage them to share it with us at inbox@anash.org