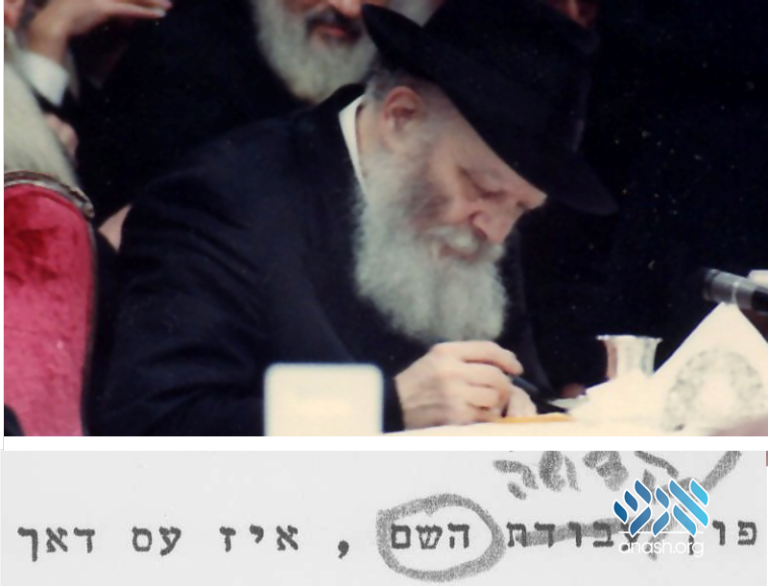 The great lengths the Rebbe went to not erase Hashem’s name and even G-dly terms. A study.

During these days of sefira, minhag Chabad is to learn masechta Sotah. One of the famous things we learn from the mitzvah of sotah is the importance of sholom bayis. As the Gemara says that Hashem allowed us to erase His holy name for the sake of marital harmony.

Other than for the mitzvah of sotah, erasing Hashem’s name is actually an Issur D’oirayso (biblical command). While the actual prohibition is only to erase one of Hashem’s 7 holy names (Havaya, Elokim etc.), it’s preferable not to erase even other words that refer to Hashem such as יי or ‘ה (see Rama YD 286:10 and Pischei Tshuva 16).

Those familiar with the Rebbe’s proofs would have surely noticed that the Rebbe was very careful not to erase any word that referred to Hashem (such as השם or Eibershter etc), and when the Rebbe wanted that Hashem’s name should indeed be taken out of that specific line, he would rather circle it instead of crossing it out.

The Rebbe wanted that it should say קדושה instead of עבודת השם. But while he crossed out עבודת he circled השם.

This practice is familiar to those who are privy to the Rebbe’s proofs. However, recently, a scholarly reader pointed out to Anash.org, that the Rebbe’s zehirus (cautiousness) in this went a lot further, in that he would not even cross out a word referring to a level of G-dliness, such as אצילות or אור (when אור was referring to Hashem’s infinite light).

Here is an example from Rebbe’s proofs on the Yiddish “Shiurim B’sefer HaTanya” (available here), perek 39.

[The Rebbe did cross out בריאה and יצירה, because as explained in Chassidus, only אצילות is actual G-dliness, whereas the lower worlds are creations of Hashem].

It seems that the Rebbe didn’t even cross out words which are only talking about Hashem, even if the word was not referencing Him himself.

Here, also from a proof on “Shiurim B’sefer Hatanya” perek 39, the Rebbe crossed out the line כולא קמי’ כלא חשיב (nothing has any worth in front of Him). Notice how the Rebbe only circled the word ‘קמי (Him).

The Rebbe was so careful about not erasing Hashem’s name, and didn’t even want to erase the אלקים of אלקים אחרים despite it referring to avodah zara and been written with a קוף and is technically not even Hashem’s name!

See this picture from the Rebbe’s proof’s to “Shiurim B’Sefer HaTanya” perek 20:

While the Rebbe crossed out the word אחרים he only circled the word אלקים!