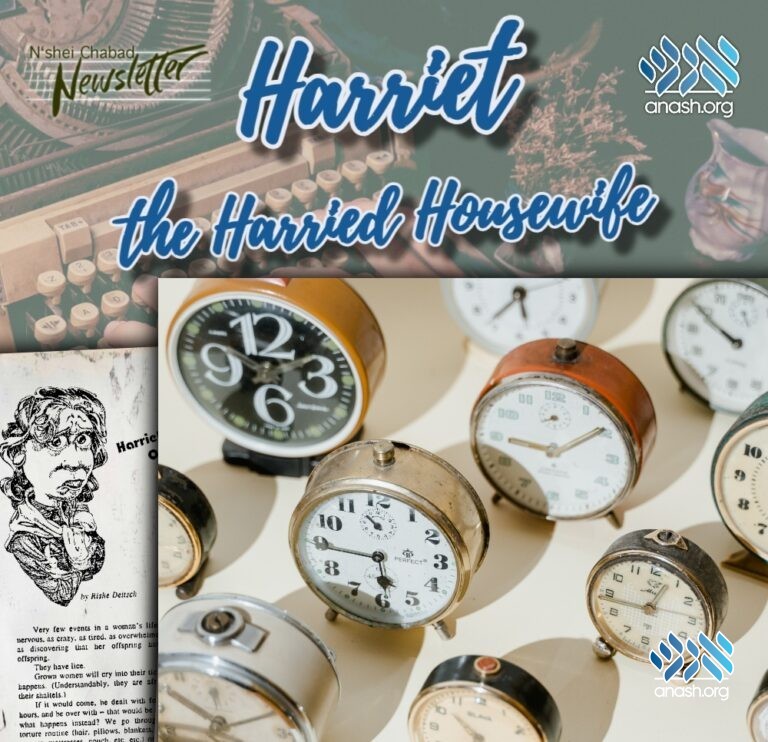 Will Harriet give up on the chance to become an ethical monotheistic philanthropist? Is there truly only one way to tell time? You’ll find out in installment 3 of N’shei Chabad Newsletter’s nostalgic Harriet the Harried Housewife.

Reactions to the column about getting free estimates were varied, as always. Most people who commented said that it was only of interest to people involved in renovations. Okay, I can live with that. One woman called to say that she could relate completely to what I wrote—she has the three-estimates-fever so bad that she physically cannot go out for an evening without getting estimates from at least three babysitters. If they’re off the block, she has to factor in gas to drive them home afterwards. It gets so complicated, she just stays home.

One nice thing about renovating, especially if it involves moving, is that often your phone service has to be shut down for a day or two. That’s lovely, since telephones are such a source of Guilt. You know – it’s an hour after Havdalah, and your phone rings. You know you shouldn’t, but you pick it up anyway.

“Harriet?” Shucks, Sonya recognized your voice although you tried to make it high and nasal in case you should need to pretend you were one of the kids. “Listen, there’s a self-defense class tonight. They figured people have time on Motzoei Shabbos. If you can drag yourself out and come, you’ll become physically strong as well as independent and self-confident!”

Mumbling excuses, I decline. I mean, honestly, how can I concentrate on my biceps when I haven’t opened my mail in a week, four kids need baths and three need to be picked up from friends’ homes and the baby is quietly, happily, pouring out the silver polish behind the kitchen bench? But as she hangs up, you can almost hear her thoughts: “Fine, if you don’t want to be strong, independent, self-confident!”

On Friday, the Thing rings again. It’s her again. “Pirkei Avos Shiur Shabbos at 5:30, should I stop by for you?” You start to clear your throat. This is good. Clearing your throat gives you time to formulate your response. The nursing baby, the guests, the cholent that needs to be doled out all day but not taken off the blech – your friend, sensing what you’re about to say, says: “You’ll be a different person if you come, really, it’ll turn you into an ethical monotheistic philanthropist and it’s only an hour!”

You’re tired of trying to explain that your juggling act can’t handle any more oranges, or they’ll all roll out the door. Sighing, you just say no. But as she hangs up, you can almost hear her thoughts: “Fine, if you don’t want to be an ethical monotheistic philanthropist!”

But we don’t necessarily need the telephone to make us feel guilty, do we? What about the time you were just standing innocently in front of your house, waiting for your child’s bus. A friendly neighbor accosts you: “I’m going to Rabbi Mangel’s class in half an hour, want to come? Last week he spoke about Emunah and it was so inspiring my whole week was uplifted. Come with me, I’ll drive!” Face to face it’s even harder to explain your juggling act. “I can’t. I have so much to do today. I never miss my Tuesday morning shiur but that’s it. I have 20 phone calls to make, the baby only sleeps an hour—” But it’s no use. As she turns away, you can almost hear her thoughts: “Fine, if you don’t want to be uplifted all week, if you wish to deliberately remain an uninspired drudge . . .”

So here I am, just as you left me, as perfectly content as only a harried housewife (who knows she’ll always be one) can be. Happy despite the fact that I am NOT physically strong, independent, self-confident, and an ethical monotheistic philanthropist whose every move is spiritually inspired.

As much as I claim I simply and truly cannot go to this and go to that, I must admit I was a little miffed when my own husband commented the other night, “How come you never go to those things?” pointing to a notice of an upcoming meeting. Why? WHY?? Because I’m taking care of your children, your house, your errands – but wait. Why give a practical answer to what was only a rhetorical question (such as this one)? When this happens to you, don’t get all huffy. He didn’t mean to say you’re not busy.

Speaking of not getting miffed at one’s husband. I have a suggestion for you, the newlywed contingent. It would be helpful if you young ladies UNLEARNED the entire chapter you learned in second grade entitled “Jerry and Janet Learn to Tell Time.” From now on, instead of telling time the traditional way (where there are sixty seconds to a minute, sixty minutes to an hour, etc.) you must now reset your watch, so to speak, to whatever brand of time your husband keeps.

It took me about 15 years to learn this, but I’ve finally mastered it. Years ago, if my husband said, “We’re leaving in five minutes,” and my babysitter wasn’t going to show up for 20 minutes yet, I’d run to a neighbor to ask if she could come over and watch my kids till the babysitter was due to arrive. And then do a slow plahtz… But all that is behind me now. NOW if my husband says we’re leaving in five minutes and the babysitter is due in 20, I calmly take out another bedtime story to read to the kids, and that’s before even deciding which shoes to wear. That is because my particular husband’s definition of “five minutes” is actually “five minutes from a half-hour from now,” b’laaz.

I know, also, that when he says he’ll be home at 6, he means he’ll be turning his thoughts toward home at 6, as he enters his car. He will, however, not actually be home b’gashmius before 7. Then there’s the business with moving clocks. Give your hubby the benefit of the doubt. “4:00 new time or 4:00 old time?” is a question I must ask myself when my husband says he’ll pick us up at 4:00 sharp. After all, it’s only been a week since we changed the clocks, not everyone is used to it yet.

Now my sister married a fellow from Australia, where day is night and night is day – I can only imagine the allowances she has to make.

Yes, dear newlyweds, and I’m sure you oldlyweds agree. We women must bend over backwards to make things work and unlearning the clock is only one part of it. But an important part. Why, just last week I was supposed to test my second-grader on telling time and I couldn’t bring myself to do it. What, spend hours drilling her on it, only to have her unlearn it ten or 12 years from now?! Not my little HH in training!