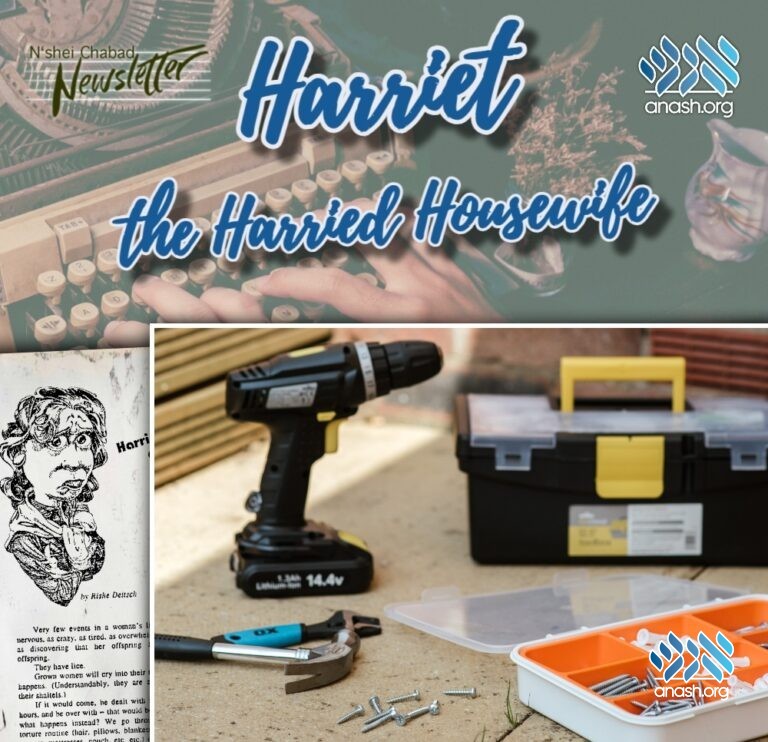 In this week’s installment of N’shei Chabad Newsletter’s nostalgic Harriet the Harried Housewife, we discover how many estimates a bona fide harried housewife must get for every job, and why you should never, ever sign a contract with anyone named Barney.

Now I used to lead a simple life. Let’s say I needed to fix or replace a crucial part of my home. I would call up the place. They’d come, fix or replace, and I’d pay them. Then we’d all live happily ever after until the next time something broke, when I’d repeat the procedure.

No more! Ever since my good friend Sarah Berhman introduced me to the concept of THE FREE ESTIMATE, my life has changed. I stand enlightened. No longer does a job mean one phone call to me. I now realize that for every job in my home, no matter what size, there are two kinds of people: those who will charge $1500, and those who will charge $150, for the exact same job.

So what does one do? First of all, we must get a THIRD (FREE) ESTIMATE. This third estimate will, naturally, fall somewhere in the middle, say, at $600. Now our work is cut out for us. We cannot simply hire one of them. Oh no. Now that we’ve gotten our three free estimates, we need to call up each one’s REFERENCES. (If you play your cards right, someday you too will become a REFERENCE.)

Each estimate gives us names, phone numbers, addresses, and directions on how to get there, always somewhere way past Flushing. This in case we wish to personally, first-hand EXAMINE their work, the QUALITY and EFFORT they put in, how extra-special the LOOK is, how very WORTH the money they are. Now we call up the references. Naturally, the guy who said $1500 has very satisfied references. Unfortunately, they happen to live in Upper Manhattan, they’re not sure their doorman would let us in, plus they’re going to be on the island of Aruba for the next two weeks and the butler and nanny have been instructed not to open the door to strangers. Okay.

The $150 guy also gave us phone numbers to call for references. “To tell the truth. I wasn’t that happy with his work. To tell the truth, it all fell apart two weeks after he did it.” And you weren’t THAT happy? “Well, it wasn’t all his fault. The kids poured Elmer’s glue on it, and we had to scrape it off…” AHA, a harried housewife! We have now learned that the $150 guy cannot handle people like us. To tell the truth.

On to the middle-priced guy. Everyone is happy with him. We even drive out and see his work, which is beautiful. There’s a slightly hysterical edge to our investigation by now since the work is supposed to be not only done, but dry, by the time all the Tishrei guests arrive. So, filled with relief beyond words, we sit down to write a contract with the middle-priced guy. And as we go to sign on the dotted line, we learn one more hard reality: Remember the free estimate? IT WAS ONLY AN ESTIMATE. This means a “rough guess” for those of you whose dictionaries are holding up the left side of your pianos.

So the lesson is that free estimates are never free. They are not free from worry, or from more work, or from additional expense. Hey Sarah,  it all makes sense, but free estimates can eat you up alive.

Another thing which we have come to realize is the power of names. For example, one time Sarah needed some windowsills and window frames to be stained and finished. She was at her wits’ end, not having any stainers in her circle of acquaintances. But then a bulb suddenly lit up in her, after all, adult-sized brain. “I can read!” she remembered. Joyfully, she grabbed her yellow pages and began looking for stainers. She found Greg. “Do you give free estimates?” But of course! Greg wanted $300 for the job. Greg’s free estimate was estimably low – could it be a sign of low self-esteem, she worried – so Sarah turned to him warmly, as to an old, dear and trusted friend, and said, “Dear Greg, would you mind taking home this stick of wood which I am holding in my hands, and doing to IT what you are proposing to do to my precious windowsills?” Greg took the piece of wood into his stained-up hands and promised to be back with it on Thursday.

Of course, he had not specified which Thursday (or maybe he had, but he only spoke Polish) so Sarah couldn’t really complain when he showed up three weeks later, but, reliably on a Thursday, precisely. The piece of wood, however, had a bad case of the bubbles. But it was a Thursday. An honest, reliable, if bubbly, sort of man, our Greg.

But then Sarah remembered. “There were lots of names in the yellow pages!” she exclaimed. Ooh, there’s a nice one. “Architectural Design Wood-Working.” Now those are the kind of words people like us need to hear, at a time like this! Soothing, professional words. Words filled with know-how,  words just dripping with confidence. But Architectural Design Woodworking, or A.D.W. as their friends call them, wanted $2500 for the job. Out of the question.

(Sarah sanded and painted the windowsills herself, something a true HH would never attempt.)

One thing I’ve noticed. People who are in the same profession tend to have the same names. For example, there is a shocking number of people named either Greg or Stanley who are wood stainers. Don’t ask me why this is so. What am I, a psychiatrist? I’m a housewife, as is poor Sarah, and neither one of us ever wants to speak to anyone named Greg or Stanley again in our lives, no offense to all the innocent ones. Paperhangers tend to be Alfred or Henry. Painters: Rafael or Ari. Tile men: Frank or Nathan. And never, ever sign a contract with anyone named Barney.

Once you learn to do things in your home by getting at least three free estimates, there’s no going back to the old, simple way. You can never just call the guy and get it done, without feeling as if you’re shirking your duties as wife, mother, and keeper of the budget.