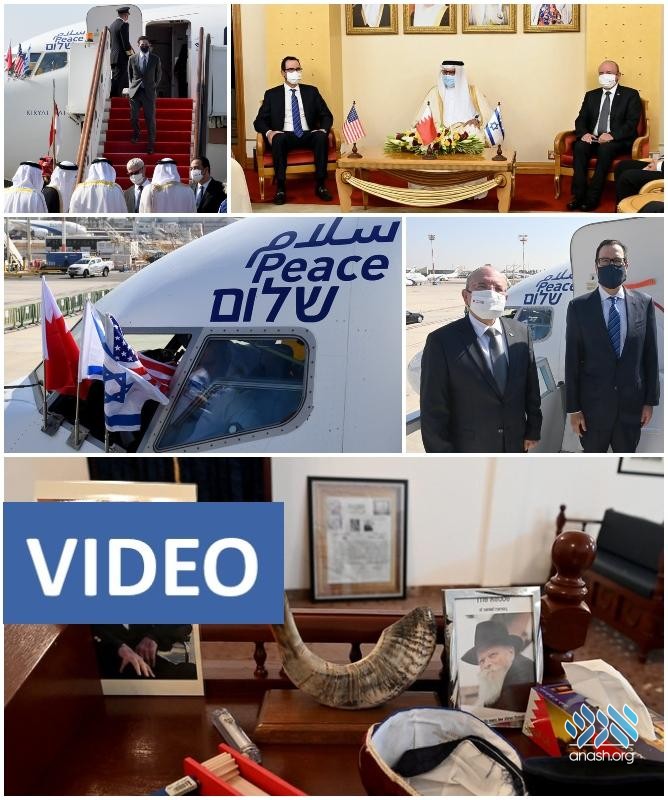 A joint American-Israeli delegation headed Sunday for Bahrain, where a number of agreements were signed following the historic peace deal brokered by President Donal Trump. After the signing, members of the delegation gathered in the country’s only shul for a minyan maariv.

A joint American-Israeli delegation headed Sunday for Bahrain, where officials will be signing a number of bilateral agreements following the historic peace deal brokered by President Donald Trump and signed on the White House lawn earlier this month.

The flight from Israel to Bahrain was given the number El Al flight 973, a nod to the international dialing code for Bahrain. Leading the delegation were U.S. Treasury Secretary Steven Mnuchin and Israeli Prime Minister Benjamin Netanyahu’s national security adviser, Meir Ben-Shabbat.

Ben-Shabbat explained that the purpose of that the visit was to “translate plans to actions and concrete agreements” with the signing of a range of deals involving finance, investment, trade, tourism, communications, technology and agriculture.

The deals signed on Sunday were additional steps in the process towards full diplomatic ties, a process set into motion by the signing in the White House. The two countries are expected to eventually establish embassies and exchange ambassadors. An Israeli official said the Israeli Embassy was expected to open in Bahrain in the coming months.

Following the official signing ceremony, some members of the delegation visited Baharain’s only shul for a minyan ma’ariv. Although the community used to number in the thousands, currently there only 35 Jews left in the country, and the shul is rarely used.

In the photos published by the American Embassy and the video on the “Israel Arabic” Twitter account, one can see an Aron Kodesh, a few chairs, and in the center of the room a small bima. On the bima is a shofar, menorah, graggers….and a picture of the Rebbe.