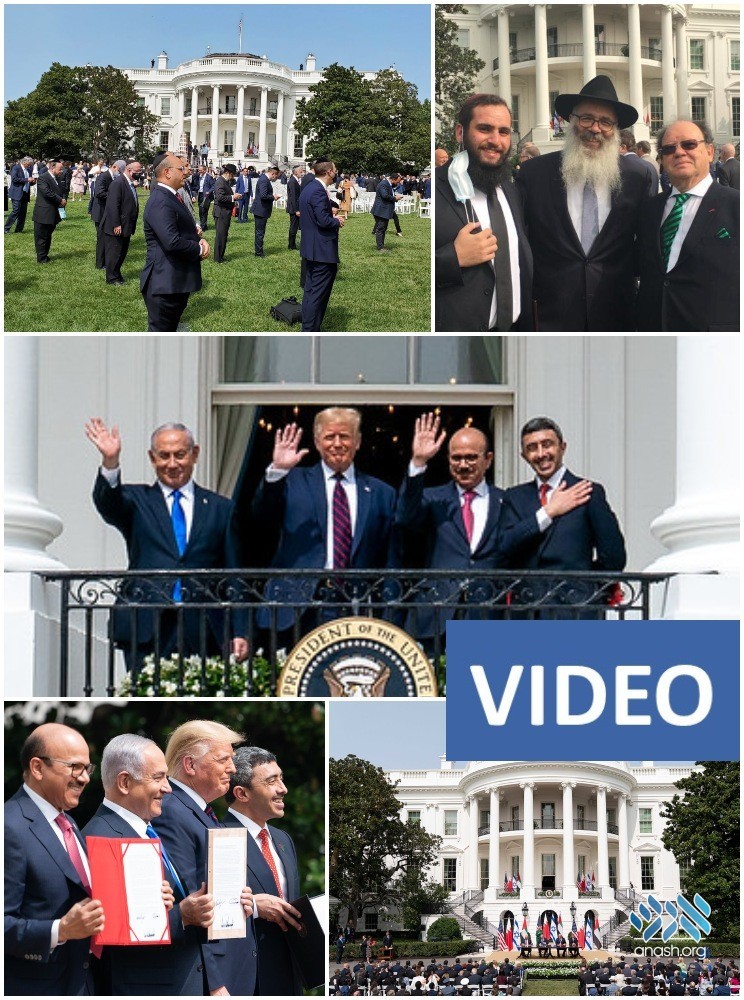 Many Frum Yidden, and even a few Lubavitchers were seen in attendance at the signing of the historic Abraham Accords at the White House on Tuesday. The signing was followed by a minyan for Mincha.

President Donald Trump on Tuesday declared the “dawn of a new Middle East” as he presided over the signing of two historic Middle East diplomatic deals between Israel and two Gulf nations, in an event attended by many Frum Yidden and even a few Lubavitchers.

“We’re here this afternoon to change the course of history. After decades of division and conflict we mark the dawn of a new Middle East,” he said at the ceremony in the South Lawn of the White House.

“Thanks to the great courage of the leaders of these three countries, we take a major stride toward a future in which people of all faiths and backgrounds live together in peace and prosperity,” he said.

The deals between Israel and the United Arab Emirates, and Israel and Bahrain, involve the exchanging of ambassadors, establishment of embassies and co-operation on a range of fronts — including trade, security and tourism.

However, the full agreements have not been released, and it is yet unknown what promises Israel made for these deals. Among the Israeli right-wing, there is worry that Israeli Prime Minister Bibi Netanyahu agreed to a settlement freeze or other concessions in return for signed papers and a magnificent ceremony.

What is known, is that the agreements, known as the “Abraham Accords” will allow Muslims from the UAE and Baharain to visit Islamic holy sites in Israel, including the mosque on Har Habayis, a serious violation of Halacha and the holiness of the location. In addition, the Minister of Foreign Affairs of the UAE thanked Netanyahu for halting the annexation of “Palestinian lands” in return for the peace deal.

Earlier in the Oval Office, Trump said “we’re very far down the road with about five additional countries.” He declined to name the countries he is speaking with and later said it could be “five or six” other countries.

Israeli Prime Minister Netanyahu and the foreign ministers of both the UAE and Bahrain were present to sign the deals at the ceremony. Trump signed onto each one as a witness. The leaders also signed a separate trilateral declaration of peace.

Among the 1,000 guests attending the signing were many Frum Yidden and black hats were not hard to find among the crowd. Among them were shliach Rabbi Zalman Wolowik of the Five Towns, close friend and mentor to US Ambassador to Israel David Friedman, and UAE Rabbi Levi Duchman.

Following the ceremony, a large minyan for Mincha took place on the front lawn of the White House, possibly for the first time. Participants described it as a unique moment of Jewish pride on the grounds of the capital of the most powerful nation on earth.