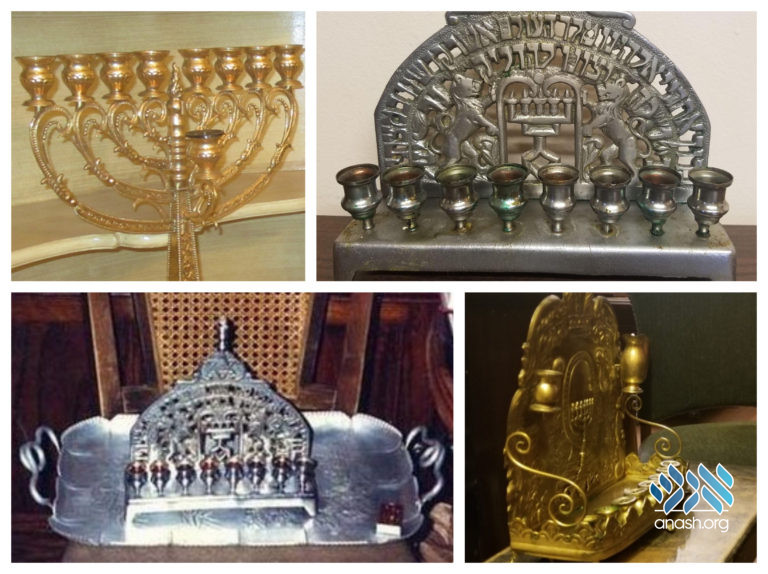 With Chanukah fast approaching, Anash.org is proud to present an overview of the holy menorahs used by our Rebbeim.

The first menorah is the one the Rebbe personally used. It is photographed here in the Rebbe’s room. It is said that the Rebbe purchased it on the Lower East Side soon after arriving in the US. It was not a silver menorah. It had a magen dovid at the top, underneath the place for the shamash.

The second picture is the same menorah, in a picture taken recently, where one can see the details clearly. It is said that in the menorah there is oil and wicks from Chanukah 5754.

The second menorah is one made pure gold, photographed in the Rebbe’s house. It was given to the Rebbe by Reb Ahron Klein, a Crown Heights resident, in honor of Yud-Alef Nissan 5736 (1976). Reb Ahron was born in Vienna and was sent to a detention camp in Canada by the British. He was released from the camp and went to study at the Lubavitcher yeshiva in Montreal, due to the hishtadlus of the Frierdiker Rebbe and his shluchim.

Reb Ahron had a great love for the Frierdiker Rebbe and the Rebbe and did all that he could to help them in their holy work. Before purchasing that menorah he came to Reb Shmuel Eizik Popack and told him that he needs a partner to buy the gold menorah. Popack agreed. A short while later he told Reb Shmuel Eizik that he decided to buy it by himself, no partners necessary.

Before giving the menorah to the Rebbe, Reb Aharon had the menorah inscribed with the possuk “ערכתי נר למשיחי”. He is to have told the Rebbe at the time that he knows that the Rebbe won’t use it, but a melech needs to have a menorah like this.

Reb Ahron had previously bought a pure gold becher and tray set for the Rebbe and would not sell his share in this gift to anybody.

Although the Rebbe kept this menorah in his house, he did not use it, save for once or twice, depending on which hearsay we are to believe. We can assume for one of two reasons: that the Rebbe for the most part did not use gold or silver items, even for mitzvos, or because it was round, and a few years later the Rebbe spoke about the menorah not being round and that it should be like the Rambam himself had drawn, k’alachson.

The third menorah is the Friediker Rebbe’s menorah which was recently added to the display in the Central Lubavitch Library. More information can be found in the article published earlier this week.

Have more information? Share it in the discussion box below!