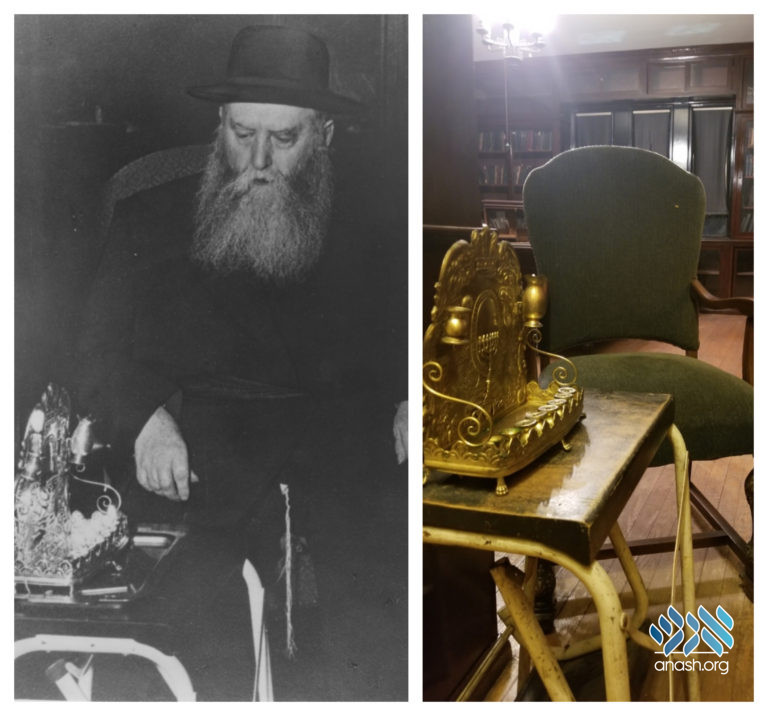 The menorah used by the Frierdiker Rebbe will be displayed in a new exhibit at the Central Lubavitch Library.

In honor of the upcoming yom tov of Chanuka, the Central Lubavitch Library will be updating their exhibit to include the menorah of the Frierdiker Rebbe, seen by the public for the first time.

The menorah was lit by the Frierdiker Rebbe on a step stool by the door of his yechidus room on the second floor of 770.

Displayed in the exhibit is the actual menorah, as well as a picture of the Frierdiker Rebbe lighting the menorah on Chanuka 5710/1949 – the last Chanuka before Yud Shvat 5710.

Additionally displayed is a contemporary picture of the menorah in the same spot in the yechidus room, on the same stepstool. In the background of the picture is the Frierdiker Rebbe’s chair, the same chair seen in the picture from 5710.

Rabbi Sholom Ber Levine notes that from the picture of Chanuka 5710, one can note various Chabad customs, which, years later, were transcribed in Sefer Haminhagim.

Firstly, the menorah was lit in the doorway, even though the windows faced a רשות הרבים – public domain (Eastern Parkway), and not a courtyard. Secondly, the Frierdiker Rebbe is wearing a gartel but has his regular hat, and not the spodik he would wear on Shabbos and yom tov. Lastly, one sees there was no minyan present by hadlakas neiros, unlike other Chassidic courts.

This exhibit joins the other exhibits on the 3rd floor of 770, where, a whole year, one can see kisvei yad of all 7 Rabbeim, and other manuscripts and rare seforim.