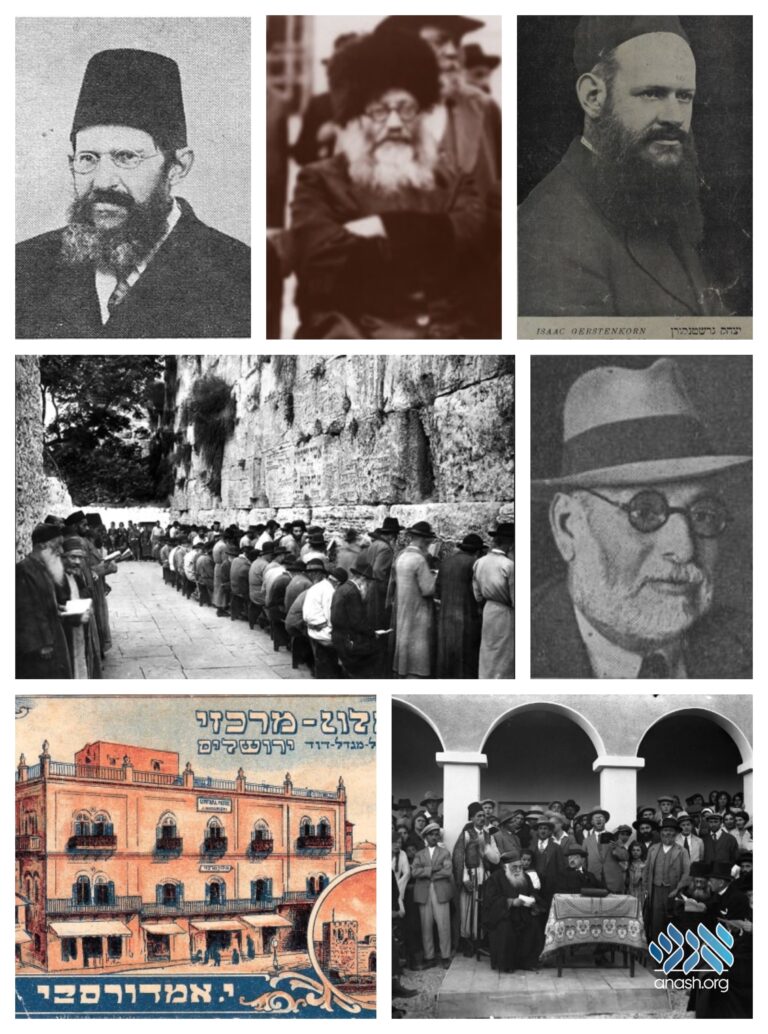 Monday morning, 13 Menachem Av, the Frierdiker Rebbe left Yerushalayim, but first, there were “goodbyes” to say.

As mentioned before, the tensions in Eretz Yisroel between Jew and Arab were rising. For the Frierdiker Rebbe to make another visit to the Kosel with a large entourage would possibly make tensions boil over. Not going again was also out of the question. So the Frierdiker Rebbe decided to go early in the morning. But even then a mass of people accompanied him, as did his uncle Reb Moshe Horenstein and the Rashag.

Farewell to the Kosel

At 6:30 am, the Frierdiker Rebbe was already after davening. He then immediately drove to the Kosel, where he stood until 8:00 am. Reb Shimon Glitzenshtein recorded the Rebbe’s visit: “He lifted his eyes, and with a look filled with devotion and elevation of the soul canvassed the entire Kosel plaza, mentioning that now he sees it well… He poured out his heart with tefillos and tears. He then asked about the new buildings going up around the Kosel area.”

On the way back to the hotel, the Frierdiker Rebbe mentioned the quote of Chazal that says about Yerushalayim “a person never said the place is too tight,” using the word makom. Chazal referred only to the concept of makom, not the concept of zman, because when it comes to space you can squeeze in and double up to make more space and room. But when it comes to time, as much time as one spends in Yerushalayim is never enough.

A great mass of people awaited the Rebbe at the hotel. At 9:45 am, the Frierdiker Rebbe left the hotel and slowly made his way to the waiting car. It wasn’t easy getting to the car, as everyone wanted to say goodbye and have a last look at the Rebbe. The car first drove to the home of the Judge Gad Fromkin in Rechavia; the Rebbe wanted to show his appreciation to his father, the late Yisroel Dov Fromkin, a Chabad Chossid and the publisher of the Chavatzeles periodical. Since the junior Fromkin had been out of the country for most of the Rebbe’s stay there, the Frierdiker Rebbe asked that he join them on the trip to Tel Aviv.

Until the village of Motza the Frierdiker Rebbe was accompanied by Reb Nuchem’tshe of Rachmistrivka, who bid farewell there. Some ten buses filled with Chassidim drove ahead to Tel Aviv to be waiting for the Rebbe at the city entrance when he arrived.

Tel Aviv and a Stop in Rechovot

More than 1,000 people awaited the Frierdiker Rebbe’s arrival at the Mikveh Yisroel Agricultural School at the Southern entrance to Tel Aviv. Some 20 buses drove from nearby Yaffo, where the Rebbe’s cousin Rav Schneur Zalman Slonim was rov. After greeting the Yaffo delegation, the Rebbe was driven to the Sfat Yam Hotel on Allenby Street. At 3:00 pm the Rebbe started seeing people in yechidus. First to enter was Rav Eliyohu Aron Milaikovsky, who was a rov in Lithuania and Russia and was active in helping the Frierdiker Rebbe in the Soviet Union, and had managed to come up to Eretz Yisroel. A very emotional Rav Milaikovsky spent an hour with the Rebbe discussing the situation in the Soviet Union as well as in Eretz Yisroel.

From 4:00-6:00 pm, the Frierdiker Rebbe greeted and gave “shalom” to the large crowd that had gathered at the hotel. In his diary, the Frierdiker Rebbe wrote that some 600 people passed before him. After a brief rest, the Rebbe and Fromkin drove to Rechovot. Fromkin wanted the Frierdiker Rebbe to see the settlements and his orchard there, but by the time they arrived it was dark and the orchard locked with no key available. “Needless to say,” Fromkin later wrote, “was I ever embarrassed!

But, Fromkin points out, the trip wasn’t for naught. First, he had the zechus of being in the Frierdiker Rebbe’s company for a long time. Besides, the Rebbe enjoyed the fresh air at the orchard, and, Fromkin adds, “I’m sure that the Rebbe absorbed something on his trip there despite the dark.” Years later, Fromkin wrote gave the approval to establish the Chabad settlements in Kfar Chabad and Lod.

Upon returning to Tel Aviv, the Frierdiker Rebbe again began to see people in yechidus. Some 700 additional people, many of them chassidim who had been chassidim of the Rebbe Maharash and his other brothers. “It’s very pleasant to see such ‘baalei tzurah.’ Even the simplest among them seem to be people of great character, with a special aura about them,” the Frierdiker Rebbe wrote.

In Yerushalayim, there lived an old chossid – Reb Meir’l – who had merited to travel to the Gerrer Rebbe, Rav Yitzchok Meir Alter, author of the Chiddushei HaRim. Reb Meir’l told Reb Avrohom Erlichman that he remembered the Rebbe Maharash visiting Warsaw and that he had the zechus to see him then. The Maharash stayed in Warsaw for several days, and Reb Meir’l remembered that in Warsaw they spoke about the wonder that happened then: The entire time he was there, not one Jew passed away. This, in a city of many tens of thousands of Jews. When Reb Meir’l saw the Frierdiker Rebbe he was stunned to see how similar he appeared to the Rebbe Maharash!

At 10:30 pm, after a break for Maariv and greeting people, the Rebbe was asked to go out on the porch, so that the masses waiting outside could also see him. The number of people waiting outside surprised the Frierdiker Rebbe, as there were some 6,000-8,000 waiting on the streets! The street was brightly illuminated. When the Rebbe came out on the terrace, great shouts of excitement and loud cheers resonated from the crowd. When it quieted down, the Frierdiker Rebbe blessed them with a short bracha.

Tuesday morning, 14 Menachem Av, the Frierdiker Rebbe arose at 5:30 am. From 6:00 am to 8:00 am he davened. Then there were two more hours of yechidus. Then he was driven to the home of Rav Schneur Zalman Slonim in the Neve Shalom neighborhood, where he spent a considerable part of the day. Upon his return to the hotel, the Mayor and a small delegation of City leaders came calling. When they were done, it was three more hours of yechidus, until 1:45 am!

In Tel Aviv, there lived a former tomim in Lubavitch who had strayed from the path of Torah and Mitzvos. At first, he hesitated to visit the Rebbe, because of his current state. But the yearning was too much for him, and he came to the Frierdiker Rebbe for yechidus. The Frierdiker Rebbe recognized him immediately and told him: “M’dreit zich un m’dreit zich un m’zet zich!” (Roughly: One wanders and wanders until we finally meet!). He later returned to a Chassidic way of life and told the story.

Reb Yisroel Noach Duchman managed to leave the Soviet Union and come to Eretz Yisroel. He too came to see the Frierdiker Rebbe, but, so great was his awe of the Rebbe that he could not utter a single word. The Rebbe smiled to him and calmed him down until he could say what was on his mind. He asked for a bracha for his two brothers, Reb Boruch and Reb Zalman. The Frierdiker Rebbe said that he never forgot them and blessed them that they leave Russia soon. The Rebbe also asked about their mother, and asked R. Yisrole Noach to tell his family that the Rebbe does not forget them.

Then, the Frierdiker Rebbe visited the town of Petach Tikvah. For a description of that visit. see here.

On the way back from Petach Tikvah, the Frierdiker Rebbe stopped in Bnei Brak, which had been founded only five years before. There too an official reception awaited him, headed by Reb Yitzchok Gershtenkorn, mayor and founder of the town. The Rebbe spent some twenty minutes there, inquiring about the chinuch situation and whether the residents set aside time for studying Torah. Upon leaving he wished them much success and that they succeed in raising their children according to the ways of the Torah.

Upon returning to Tel Aviv, the Frierdiker Rebbe again began to see people in yechidus until 8:00 pm. Then, a meal was prepared by the welcoming committee, after which the Frierdiker Rebbe announced that he’ll say a ma’amar that evening. At 10:00 pm, the Rebbe came out to the crowd of some 2,000 people that had gathered on the hotel roof. For the next 50 minutes, it was silent, as the Frierdiker Rebbe delivered the ma’amar ד”ה כי נר מצוה ותורה אור. Among the thousands who had gathered was one Zalman Rubashov, later to be known as Zalman Shazar.