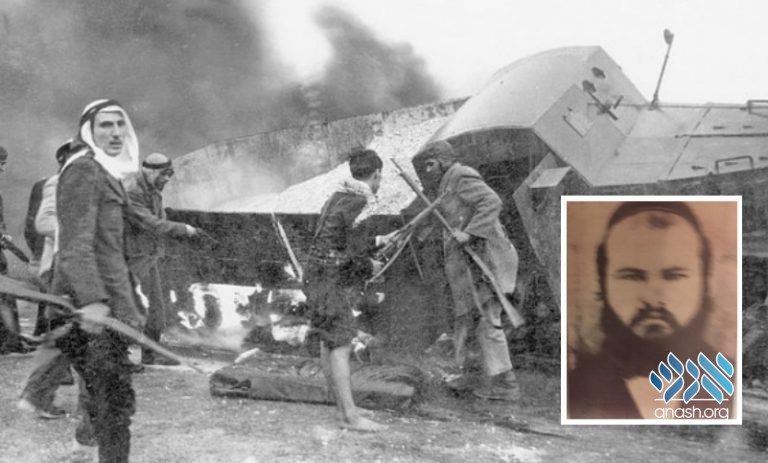 Rabbi Shimon Bentzion Eisenbach, a precious Chabad chossid from Yerushalayim, was killed by an Arab bomb during the War of Independence, on Pesach Sheini in 5708/1948.

Rabbi Shimon Bentzion Eisenbach, a Chabad chossid who lived in Yerushalayim during the War of Independence, was killed by Jordanian shelling on Pesach Sheini in 5708/1948. All of 37 years old at the time, Reb Shimon was killed while exerting mesiras nefesh to provide for a hungry family who was stuck at home.

During the winter of 5708/1947-48, after the United Nations announced that the land would be partitioned between Jews and Arabs, the Arabs from the Old City began shelling the Jewish neighborhoods of Yerushalayim. The Arabs from the other villages were cutting off supplies to the Jewish area by ambushing the convoys of food and supplies. Soon, real hunger plagued the Jewish parts of the city.

My father, Reb Shimon Bentzion, was only 37 years old at the time but was already known as of Yerushalyim’s finest yungeleit. He was the Belzer rov’s personal shochet and the one in charge of terumos and ma’asros in the neighborhood that we lived in. He took care of these jobs with the greatest of care.

On Erev Yom Kippur 5708/1947, he was not well and could not make the trip to the Belzer rov to shecht his kaporoh. Reb Aron of Belz did not allow another shochet to take his place and sent a taxi to get Reb Shimon Bentzion from his sickbed.

He was also a renowned ball tefillah, davening with great emotion.

When the UN vote on the partition of Palestine passed on November 29th, 1947, it was as if black clouds formed for him. He began to make such statements such as “I wish I will come to kever yisroel [Jewish burial].” His family expressed shock at his words, but he didn’t retract them. On Erev Pesach 5708/1948, he remarked to his father: We should be zoche to eat “min hazvochim u’min hapsochim” followed by a flood of tears, then adding “on Pesach Sheini.”

When the war broke out and the Jordanians began shelling Jewish Yerushalayim, the Eisenbach’s left their home – which was an easy target for the bombs – and moved in with relatives in Batei Warsaw. On Pesach Sheini the lack of food in the house forced him and his wife out of their home and go back to their old home to look for supplies. They had left behind a stash of flour and planned to use that to bake bread for their eight children.

They quickly got to work making the dough, and Reb Shimon was to go to the local bakery to bake the bread, the bakery being the only place with electricity, due to its proximity to the Arab neighborhoods. His route was a dangerous one, exposed to Arab snipers. He passed his parents’ home and decided to pay them a visit. There, his father refused to let him continue on his way to the bakery and blocked his way.

“I’ll go in your place,” Reb Moshe Eisenbach said. “We don’t have many children and I don’t wish for you to risk your life now.” Saying that he grabbed the dough from his son and made his way to the bakery.

Suddenly a tremendous explosion rocked the house and terrified the whole neighborhood. Soon, a barrage of bombs and rockets and followed. The screams were terrifying and many people fell victim to that Arab barrage. When the bombing ended, neighbors rushed to the Eisenbach home and found a bloodied Reb Shimon Bentzion on the floor. He had taken a direct hit and lost a lot of blood.

A few hours later, he returned his soul to its Maker.

One day, Reb Tzvi Eisenbach met a commander of the “Shomrei Ha’am” by the name of Golani. “I was with your father during his last moments,” Golani recounted. I wrote a diary during those weeks and months of the siege of Yerushalayim and these are the entries I made on that fateful day. Your father told me then to relay a message to his wife and children. “Tell them that in all my life I never hurt another human being and that I wish they too follow in my ways.” A few moments later, Reb Shimon Bentzion passed away.

The incessant shelling and the fact that Har Hazeisim was in Arab hands, didn’t allow for the casualties of war to be brought to a proper kever yisroel. Instead, they were buried in communal graves in an abandoned Arab neighborhood known as Sheikh Badr.

Some years later, the communal grave was opened and the bodies were moved to a new cemetery, each with its own proper burial. The chevra kadisha was astounded to see that Reb Shimon Bentzion’s body was complete as the day he was buried!

Also killed on that day was Rabbi Yitzchok Avigdor Orenstein, a member of the presidium of Colel Chabad and the official rov of the kosel.